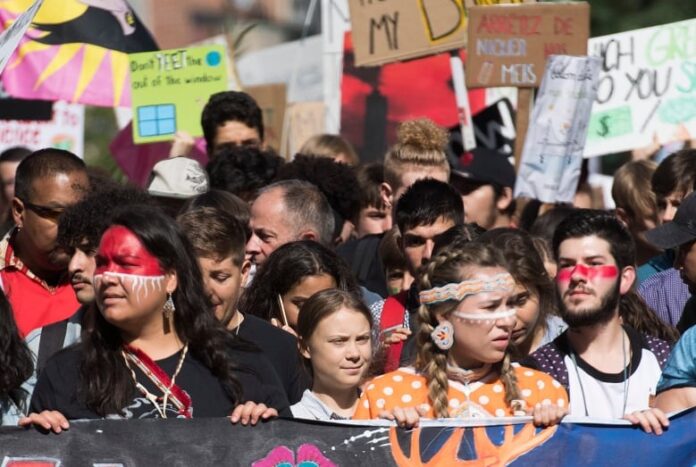 Hundreds of thousands of Canadians attended marches across the country to urge government and corporate leaders to address climate change.

The grassroots groups behind the Canadian marches have specific demands, including refusing any new oil and gas projects and cutting emissions to be just one quarter of what they were in 2005 by 2030.

“As a collective of young people from across the country, we aim to steer Canadian society off our current path of ecological and social catastrophe,” says the mandate of Climate Strike Canada, one of the groups spearheading the marches. “Drastic climate action is the only option for humanity.”

Greta Thunberg, the 16-year-old Swedish activist who has helped spur the global climate protest movement, ​​​​appeared in Montreal and encouraged thousands of Canadians to take to the streets today.

“The strikes have been very successful today,” Thunberg said in Montreal.

Thunberg began weekly sit-ins outside the Swedish legislature last year, which over the course of a few months grew into a global phenomenon. One week ago, millions of people around the world marched in protest against governments not taking drastic climate action. Another day of global protest took place Friday, including in more than 85 cities and towns in Canada.

From St. John’s to Vancouver, and as far north as Inuvik in the Northwest Territories, tens of thousands of Canadians came out in force. They came in strollers and on skateboards, on bikes and in army boots, wearing knee braces and leaning on crutches and canes. From babies to baby boomers, grandkids to grandparents, they filled parks and the lawns of legislatures and Parliament, toting papier mâché Earths and trees, some with full potted plants on their backs.

Thousands marched through the streets of Montreal on Friday to demand action on climate change. 1:24

Their message was clear: bolder action is urgently needed to save the planet from the crisis of climate change.

In Halifax, several thousand people marched through the streets and ended their protest at the headquarters of Nova Scotia Power. In Toronto, thousands more filled the front lawn of the provincial legislature and the streets around it.

In Ottawa, the crowd size exceeded most Canada Day celebrations, filling the streets for more than a dozen city blocks as the marchers wound their way through downtown from city hall to Parliament Hill. Some added a truly Canadian flavour by putting their placards on hockey sticks and insisting their chants be delivered in both official languages.

Many of those who came out called Thunberg their inspiration.

“I think she has revolutionized how we look at activism,” said Pascal Morimanno, a 17-year-old marching in Fredericton. “She is one person but there are millions of youth out here now because of her. She is the face of new activism.”

“This movement has been built around children fighting for their future,” added Roy Bateman, a 13-year-old marching in Toronto. “[We’re] also fighting for those who are less fortunate and also those who will be more harshly affected by climate change.”

He said politicians could address climate change but are making the wrong choices.

“It’s a matter of priorities,” he said.

Greta Thunberg says student protesters should take it as a compliment that powerful men including U.S. President Donald Trump have tried to ‘silence’ the environmental movement. 1:14

Thousands of protesters in Vancouver reached the final destination in their three kilometre march from city hall, plugging West Georgia Street in the city’s downtown.

Among them were the five children of the Duprat family of nearby Lions Bay, who brought their parents to the rally.

“It hurts me because I’ve only lived on this Earth for so little time and I don’t want to end it that quick,” said Nalia, 11.

Betty Kidanewold, 14, travelled with friends from the Vancouver suburb of Surrey to join the march, saying they’re tired of seeing world leaders deny climate change on TV or fail to act with urgency.

Not everyone in Canada backed the events. In the Alberta capital, several thousand people protested on the lawn of the provincial legislature, but were measured in criticizing things like the Trans Mountain oil pipeline.

Paula Camacho, a 25-year-old student at The King’s University in Edmonton, said she didn’t have a particular stance on expanding the pipeline, but added that other energy sources are also needed.

“I know there are so many people who depend (on oil) job-wise,” Camacho said. “But I think it’s good to have these conversations and talk about something that is more sustainable for everybody.”

Inside the legislature, some people put posters in their windows saying they loved Canadian oil and gas.

Coming as it has in the midst of Canada’s federal election campaign, many candidates and four of the six mainstream party leaders joined events in their cities Friday. Liberal Leader Justin Trudeau, Green Leader Elizabeth May, and Bloc Québécois Leader Yves-François Blanchet all marched in Montreal, while NDP Leader Jagmeet Singh marched in Victoria.

Conservative Leader Andrew Scheer said there would be Conservative representation at the Montreal march, but he was not personally attending any events. In fact, he flew over many of them Friday as he made his way on his campaign plane from Montreal to Vancouver for an announcement in Coquitlam, B.C.

Bernier, the only national party leader to deny climate change is a crisis caused by human activity, is campaigning in his home riding of Beauce in Quebec.

Trudeau marched with his wife, Sophie Grégoire Trudeau, and two of their three children, Xavier, 11, and Ella-Grace, 10, as well as several Quebec candidates. He was met with some cheers and some hostility. Several protesters shouted at him that he was a hypocrite because he is promising climate action but expanding a pipeline to extract more oil from Alberta.

One protester attempted to throw an egg at Trudeau but was promptly wrestled to the ground by his security detail. Xavier appeared visibly upset, and Trudeau stopped to comfort him for a few moments.

Jaggi Singh, one of Canada’s best-known anti-globalization activists and a self-proclaimed anarchist, followed Trudeau along the march route, yelling at him for buying the Trans Mountain pipeline.

“As a man born in blackface, I denounce you,” Singh shouted at Trudeau, referencing the recent revelation that Trudeau put on blackface makeup several times when he was younger.

Trudeau smiled and waved through most of the event, shouting, “Thank you for being here” at those who decried him, while his supporters around him chanted in French, “Moving forward for the planet.”

Climate change protests were held across New Brunswick on Friday. Here is what participants had to say. 0:58

Earlier Friday, Trudeau sat down with Thunberg for a private meeting. Trudeau’s quest for re-election next month depends heavily on convincing Canadians that his party’s climate plan is enough to do Canada’s part for the planet; his rivals on the left argue the Trans Mountain deal undermines any climate action he is taking. Thunberg said she told Trudeau the same thing she tells all world leaders.

“Just listen to the science,” she said.

Marches already took place earlier Friday in dozens of countries around the world including in India, the Netherlands and Italy. Thunberg said she believes 60,000 people took part in marches in her home country of Sweden, while 300,000 marched in New Zealand, more than three per cent of the country’s entire population.

B.C. woman’s death has been solved after 27 years, but for some, the wounds are still fresh

‘I am one of yours forever,’ departing Serge Ibaka tells Raptors fans

How COVID-19 has forged new friendships