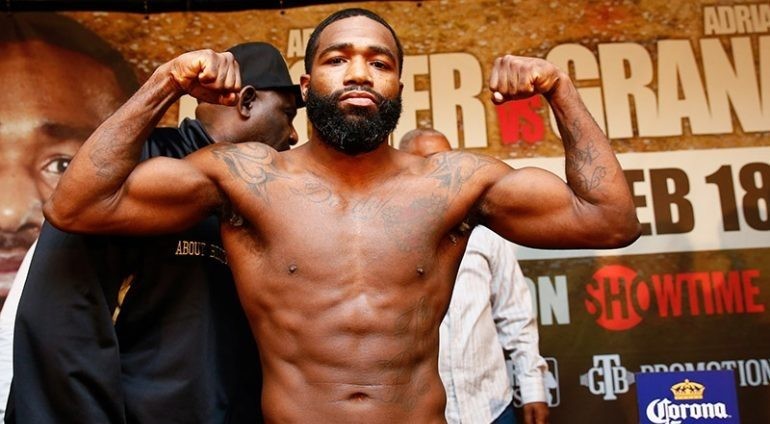 Adrien Broner, center, and Mikey Garcia pose for a selfie before their news conference in New York to announce their junior welterweight bout in July.

NEW YORK — If you were looking for trash talk between Adrien Broner and Mikey Garcia on Monday, you probably left disappointed.

The two boxers didn’t take many shots at one another during their late-morning news conference to promote their July 29 junior welterweight bout at the Barclays Center. In fact, they even posed for a selfie together when they first walked onto the stage, at Garcia’s request.

But that doesn’t mean it won’t be a good fight. After all, we’re talking about an undefeated lightweight world titleholder (Garcia) versus a former world titlist in four different weight classes (Broner).

“Boxing is going back to the old days, where the best fight the best,” Broner said. “And Mikey is definitely one of the best out there today.”

Compliments aside, it was obvious these two have very different personalities. Garcia, 29, is soft-spoken, and was wearing a business suit that wouldn’t look out of place on Wall Street. Broner, 27, is an outspoken character, and was sporting a pinkish Puma sweatsuit plus gaudy jewelry around his neck and wrist.

This fight will be a 12-rounder at junior welterweight level, meaning Garcia is moving up from 135 to 140 pounds.

“I still feel that 135 is probably the best division for me right now. My last performance at 135 I thought was great — fast, strong,” Garcia said. “But I don’t feel 140 will be much different. I think 140 will allow me to make weight a little more comfortably, and still keep my speed and my power.”

Broner has had issues making weight in the past. But he insisted it won’t be a problem this time around, thanks to a return to training in Colorado Springs, where he trained earlier in his career.

“I’m just more focused,” Broner said. “In the city — in Cincinnati or [Washington] D.C. — there’s so much going on, and so many distractions. In Colorado Springs there’s nothing to do but look at the mountains and box.”

Adrien Broner said he expects to have the best performance of his career when he meets Mikey Garcia in a junior welterweight fight at Barclays Center on July 29. Photo provided by Ed Diller/DiBella Entertainment

Both fighters sounded very confident on Monday, despite the lack of trash talk.

“I can’t stress the importance of this fight for me in my career at this point,” Garcia said. “I think it’s the biggest fight that I could actually have.

Speaking of superstars, the upcoming bout between legendary boxer Floyd Mayweather and mixed martial arts champion Conor McGregor was brought up at the news conference. Mayweather is one of the promoters involved with this fight.

“Boxing’s getting crazy, man,” Broner said. “After this fight, I just feel like, if I come out untouched — I feel like I’m gonna be victorious — I feel like I should come back and fight on Floyd’s undercard against Nate Diaz.”