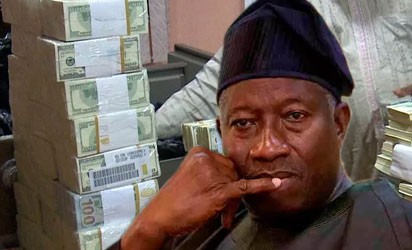 Breaking: We have proofs CBN withdrew N100bn for Jonathan before 2015 polls – Presidency
ABUJA – THE presidency Sunday night said that there was evidence that the nation’s apex bank, the Central Bank of Nigeria, CBN got specific instruction to ensure billions were moved from the bank directly to the residence of the former president Goodluck Jonathan. Ex-President GoodLuck Jonathan This new discovery is coming few days after Vice President Yemi Osinbajo described grand corruption as the elephant in the room when discussing the Nigerian economy. A source in the presidency said more compelling details have been established showing how several tranches of funds were illegally removed from the public by the Jonathan’s administration specifically ahead of the 2015 presidential elections. The source claimed that the former National Security Adviser, NSA personally supervised the physical transfer of the money from the CBN vaults to the private residence of the former President. According to the source, “In one particular instance over N70 billion was released in parts from the national treasury between January 8 and February 25, 2015. The over $289M which was also referenced last week by the Vice President is said to be included in this particular series of illegal transactions. “Besides, that in another illegal disbursement, the minutes of the Central Bank board meeting of 25th August 2014 indicated the board’s okay of another N60B requested by the former President and released later by the Central Bank.” A presidency source specifically claimed that sum which was okayed by the CBN board was not tied to any project or procurement, and was meant and disbursed purely for campaign purposes, through the office of the then NSA and the SSS leadership at the time. He said that N60 billion that was okayed by the CBN on August 25, 2014 was said to have been shared between the two security agencies thus: N40B went to the NSA while N20 billion was released to the State Security Services (SSS). “While some of these newly emerging fund disbursements have been traced to the former NSA, there are indications that some of the funds are unconnected to the ongoing Defence contract trials of the former NSA,while some might,” he said. Recall that Osinbajo, in a recent speech, had alleged that weeks to the 2015 election under the administration of former president Goodluck Jonathan about N100B was released and embezzled. He also disclosed that about $289m was disbursed illegally about the same time. The new discovery revealed that the $289m mentioned by the Vice President was released on February 25, 2015 Details of the deal shows that documents including cash vouchers indicate that $289,202,382 was released in cash to the NIA by the Central Bank of Nigeria from the Joint Venture (JV) Cash Call Account No. 000-0000-11658-366 of the NNPC/NAPIMS with JP Morgan Chase Bank, New York, USA. At the exchange rate then of $199 to a naira, $289m was equivalent to about N60 billion. But had the money not been stolen, it would be at today’ s rate over N104B. According to the source, further findings showed that in yet another set of illegal fund withdrawals under one week between January 8 and 16, 2015, the sum of N1.5 billion was released in three tranches of N300m, N400m and N800m respectively. He said, “This money was released from the MEA Research Library Account to the Jointrust Dimension reportedly owned by Danjuma Yusuf and Nenadi Esther Usman.” The source further said the sum was transferred to their various political associates, which included a former minister that is critical to President Muhammadu Buhari’s government. Further findings showed that N350 million was allegedly transferred to the former minister through his Zenith Bank Account No. 1004735721, on February 2, 2015. Also, another N250 million was allegedly transferred to him through the same Zenith Bank Account on February 19, 2015. A document further showed that yet another N10 billion was released to the Office of the National Security Adviser by the Central Bank of Nigeria (CBN) on September 15, 2015. The money was said to have been released in tranches of foreign exchange of $47 million, $5 million, 4 million Euros and 1.6 million Euros. A letter from the Office of the NSA in November, 2014 further showed that the monies were released by the CBN as ‘funds for special services’. “Further to our discussion, you are pleased requested to provide the sum of Forty Seven Million United States Dollars (USD47,000,000,00)cash out of the Ten Billion Naira (N10,000,000,000,00) and the balance in Euro to this office for special services,” a letter signed by the former NSA read. Findings have shown that this particular CBN release of N10B was sourced in November 2014 from a N40 Billion CBN released funds meant for Corporate Social Responsibility, CSR. It was this N10B that former President Jonathan instructed the CBN Governor and the then NSA to deliver to him personally in a private residence in Abuja. Sources said the money was illegally transferred using CBN van for the use of “PDP Presidential Primaries.” An official source noted that even more illegal transactions would soon be unearthed.