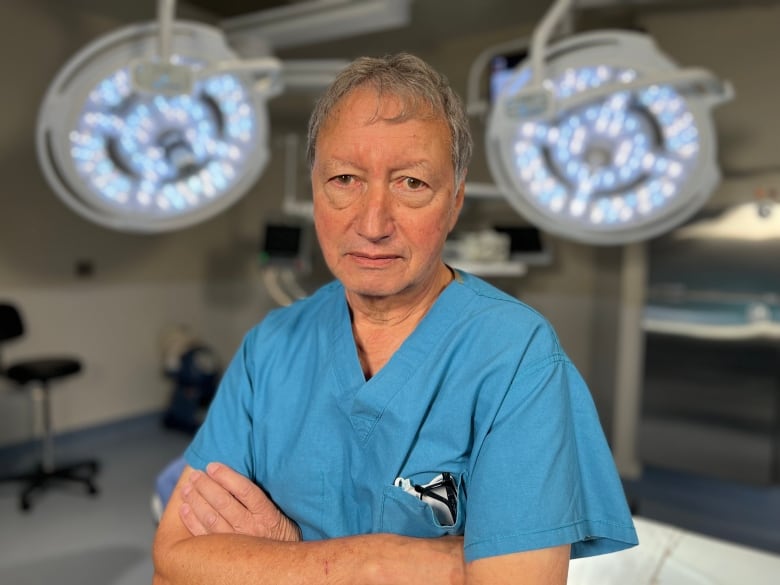 Long waits for elective surgery in Canada’s health-care system left one teenage boy in Peachland, B.C., feeling like “the Hunchback of Notre Dame,” he said, as he waited nearly two years for surgery to treat his scoliosis.

Cael Perry’s journey through B.C.’s health-care system points to the shortcomings in public health care for many types of elective surgeries, experts say. According to data provided by the Canadian Institute for Health Information (CIHI) and analyzed by CBC, nearly 30 per cent of Canadians didn’t receive their joint replacement or cataract surgery within medically acceptable time frames in 2019 — even before the COVID-19 pandemic arrived. Now, many Canadians are still waiting longer than they were three years ago for these procedures.

It’s a crisis that has some doctors pushing for private care, while others urge Canadians to keep their faith in the public system and push for better organization of the resources that are already available.

“We are in a crisis right now. It has brought us to the brink. We’re at risk of really undoing a lot of amazing work of public medicare for the last, you know, 50 or 60 years,” said Prof. Colleen Flood, University Research Chair in Health Law & Policy at the University of Ottawa.

Cael’s mother, Sharlene Perry, first noticed something wasn’t right while cutting her son’s hair in November 2020. He was 15 at the time and had just started Grade 10.

“We took a picture and … you could tell both from the back and the front that there was a twist there, that he was not normal,” she said, noting that his back had looked completely fine only months earlier.

They booked an appointment with their family doctor, who ordered X-rays of Cael’s back. The images confirmed that Cael had scoliosis. The C-shaped curve in his spine was already considered severe at an angle of 58 degrees.

Cael’s family doctor referred him to a local orthopedic surgeon, who he waited six months to see.

“I don’t look in the mirror too much, especially with my shirt off,” Cael said. “I had noticed that the pain was getting more aggressive last year during school…. Just going through the day with an aching back and stuff.”

Cael waited until late May 2021 for the specialist appointment. New X-rays showed his spine had twisted to an angle of 80 degrees by then. He and his family were told that the teen’s case was so severe, he’d need to be referred to the B.C. Children’s Hospital in Vancouver for surgery.

Five more months passed before Cael was seen by an orthopedic surgeon at the pediatric hospital in November 2021. By then, it had been about a year since he was diagnosed and his spine had reached an angle of 88 degrees.

“It’s shocking that it can even bend that much,” Sharlene said. “I just can’t even believe it’s that curved and that it’s progressed that quickly in one year. It’s crazy.”

WATCH | Cael Perry and his family reveal how his scoliosis worsened while on the wait-list for surgery, while Marketplace explores whether more private funding of health care is the answer: 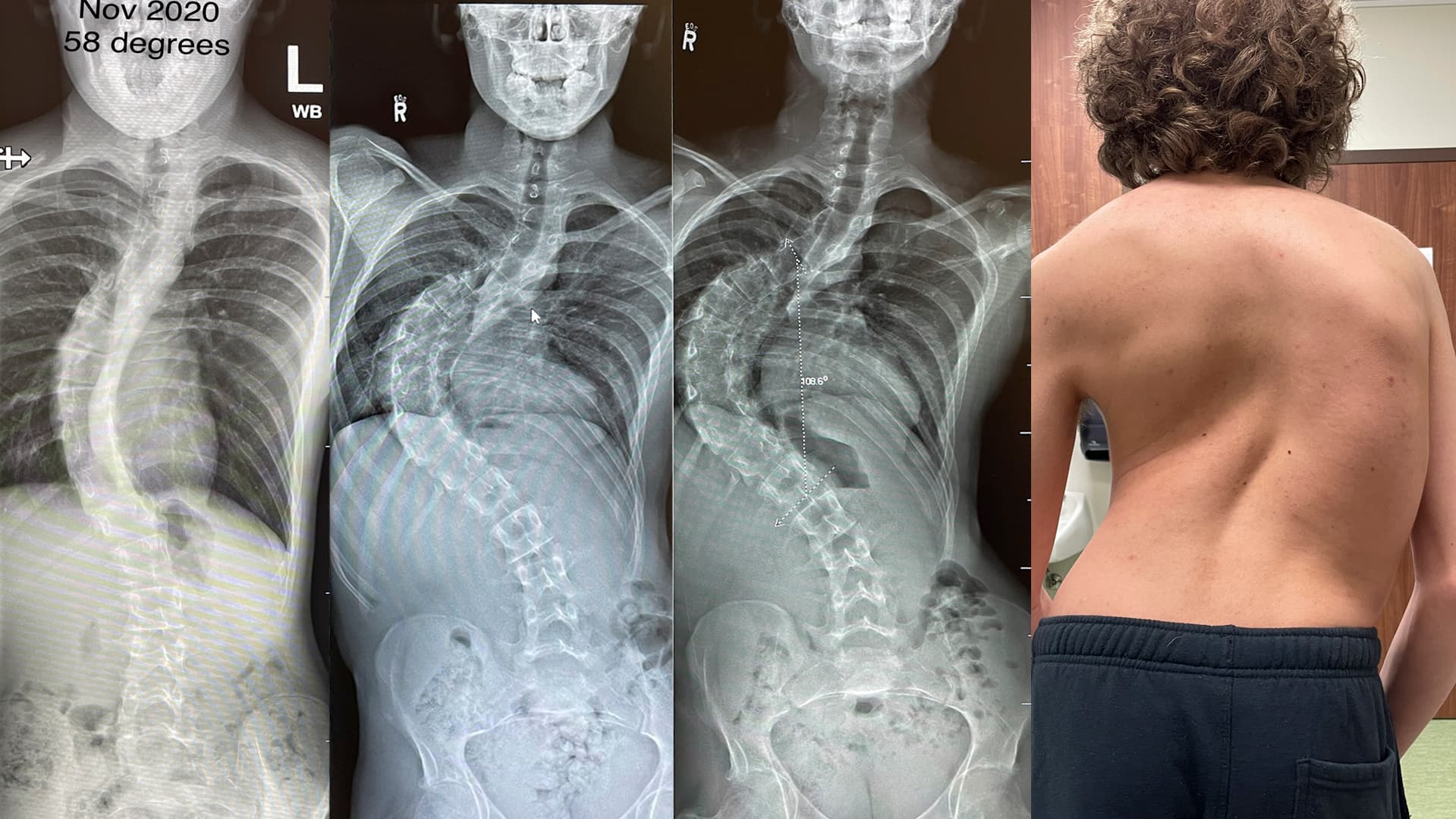 Long waits for elective surgery in Canada’s health-care system left one teenage boy in Peachland, B.C., feeling like “the Hunchback of Notre Dame” after he waited nearly two years for surgery to treat his scoliosis. It’s a crisis that has some doctors pushing for private care, while others urge Canadians to keep their faith in the public system.

The family was told they would get a call in a couple of months to book his surgery date.

“How can you tell [that to] a parent? There’s nothing they can do to fix the health of their child?”  said Sharlene.

Sharlene says hospital staff told her that staffing shortages had led to surgical delays. They also told her that an electronic records update had caused delays, too.

It wasn’t until late September of 2022 that Cael was finally booked for surgery.

By the time of his surgery, Cael’s spine was at a curve of 108 degrees.

Why the long wait?

When asked about the teen’s journey through the province’s health-care system, B.C. Health Minister Adrian Dix said he could understand the family’s frustration.

“What we’ve tried to do here in B.C. is invest immensely in new anaesthesiologists, in new medical device processing technicians, 300 new surgical nurses,” he said. “We have reduced the number of people waiting for surgery in B.C. significantly in the pandemic.”

CBC reached out to the B.C. Children’s Hospital to ask why Cael waited more than a year from the time he was referred to their facility in May 2021 to the time he received surgery in September 2022. The hospital declined to comment and instead referred CBC to comments made by Dix.

Wait times increased, even before the pandemic

Each province and territory must submit data to the CIHI, a national non-profit organization that provides data on Canada’s health system, including analysis of elective surgery wait times.

When CBC analyzed a decade of data provided by the CIHI, it found that in the ten years leading up to the COVID-19 pandemic, the waits were getting longer. The percentage of patients who received knee, hip or cataract surgery within the benchmark time frames dropped 11 per cent between 2010 and 2019, from 82 per cent to 71 per cent.

That means that in 2019, nearly 30 per cent of Canadians didn’t receive their joint replacement or cataract surgery within medically acceptable time frames.

“[If] these benchmarks are not realized, what happens?” said Flood, who would rather see incentives and rewards for provinces and health providers tied to these time frames.

“You want to reward those who are achieving those goals.”

Fast forward to late 2021(CIHI’s most recent data analysis): hip and knee replacements were still not at pre-pandemic levels, while cataract surgeries have returned to their pre-pandemic rates for most provinces.

According to CIHI, almost 600,000 fewer surgeries were performed in the first 22 months of the pandemic, compared with 2019.

Is more privatization the solution?

Dr. Brian Day, an orthopedic surgeon and owner of the Cambie Surgery Centre in Vancouver, has been arguing for over a decade that Canada’s health-care system condones pain and suffering. He says that patients who are forced to wait in long lines for surgery should have more options to pay for faster care.

“When you have a deformity like this that’s progressive, it’s just unacceptable,” said Day, when shown X-rays of Cael’s spine. “This kind of picture has to be shown to the politicians and shown to the judiciary and say, ‘Are you condoning this?'”

Day filed a court challenge in 2009 that took issue with sections of the province’s Medicare Protection Act (MPA) that prevent doctors in B.C. from billing patients above the rate paid through the Medical Services Plan (MSP), and that prohibit the sale of private insurance that covers treatment provided under the MSP.

A B.C. Supreme Court judge dismissed these claims in 2020 and the matter was again dismissed from the B.C. Court of Appeal earlier this year. In the justices’ 2022 decision, they wrote that while long waits for treatment have denied some patients their charter rights to life and security of the person, those violations are permitted under the principles of fundamental justice.

Flood disagrees that private health care will provide the solutions as some people seem to believe. “It’s a snake oil solution,” she says. She’s been studying health policy for more than two decades and she argues that a two-tiered health-care system will only benefit those who can afford to pay for it, and that it would pull valuable resources away from the public.

“What we see from the evidence around the world is that, where that happens, it invariably means that you’re actually taking away from the public health-care system,” she said.

Flood feels strongly that this is a crucial moment when Canadians need to trust in public medicare and push the government for solutions that make it stronger.

“We are in a crisis right now,” said Flood. “People are desperate and really worried, so I think the solution has to be that our governments come together and work on this … to help Canadians who are really feeling like they’ve lost faith.”

Flood, as well as several health policy experts CBC spoke with, pointed to a pooled referral system as one way to organize — and decrease — wait times. In this system, patients in need of similar surgeries are triaged together and then sent to the first available surgeon in their area.

“When I need to refer a patient to a surgeon … I have very little, if any, visibility into how long that person’s wait time is, or whether there might be someone else in the region who can do the same procedure or operation but has a shorter wait time,” said Dr. Danielle Martin, a family physician and the chair of the Department of Family and Community Medicine at the University of Toronto.

Experts say pooled referral systems for certain procedures are happening in pockets around the country, but not on a wider scale.

Flood also points to the idea of a health-care guarantee. Popular in other countries like the U.K., and Finland, it’s a concept that could be adopted here.

Unlike the pan-Canadian benchmarks that have no built-in incentives or consequences, these countries set goals with clear ramifications when health providers and agencies don’t meet target wait times. Flood thinks this is something that should be implemented here.

Day agrees this could work in Canada, pointing out that similar concepts were implemented in the U.K. in the early 2000s.

Meanwhile, Cael was released from B.C.’s Children’s Hospital a week after his surgery. He’s more than four inches taller than before. The teen is now recovering at home, and while his muscles are still pulling and stretching, he’s feeling much better.