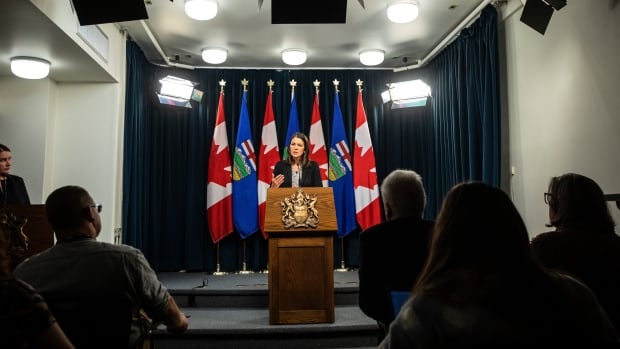 Alberta Premier Danielle Smith has opted for a mix of stability and new faces in her first cabinet.

Travis Toews will return to his prior role as finance minister after narrowly losing to Smith on the sixth ballot in the UCP leadership vote.

Smith has also rewarded Kaycee Madu and Nathan Neudorf with the title of deputy premiers. Madu, who is currently labour and immigration minister, will lead a new ministry of skilled trades and professions, and Neudorf will be at the helm of infrastructure.

“Our team will work every day to gain your trust, make bold changes and continue to build the most innovative, entrepreneurial and welcoming place in the world,” Smith said in a news release.

After they are sworn in at a ceremony on Monday, there will be 27 ministers around the cabinet table. That’s an increase from the current 20 ministers and five associate ministers.

Smith is retaining the current ministers of health, education, justice and advanced education.

The appointees are as follows:

It also shows she needs to make inroads with ministers, the UCP caucus and party members, Young said.

“She has decided to stick with Kenney’s core people in order to hold the party together, at least in advance of the next election,” Young said.

Lori Williams, an associate professor of policy studies at Mount Royal University, said it surprised her to see Smith retain LaGrange, Shandro and Nicolaides in portfolios where their actions have been controversial.

Savage, who has served as energy minister since 2019, will now move to the reconfigured ministry of environment and protected areas as former backbencher Peter Guthrie takes her old post.

Putting Guthrie in charge of energy, where he does not have a lot of experience or a high profile suggests that Smith, herself “plans to be the de facto energy minister,” Williams said.

Many of the new and continuing cabinet ministers are in ridings where the UCP may be more vulnerable to the Opposition NDP in the next provincial election in 2023, Williams said.

Five of Smith’s six leadership contest rivals will be in cabinet, including Jean in the revamped ministry of jobs, economy and northern development and Loewen in the newly combined ministry of forestry, parks and tourism.

Schulz will take over municipal affairs and Sawhney moves into a rejigged ministry of trade, immigration and multiculturalism.

Leela Aheer, who placed seventh in the leadership contest, was excluded from cabinet.

Smith has also appointed 11 parliamentary secretaries, including portfolios such as EMS reform, Ukrainian refugee settlement, multiculturalism and status of women.

The number of women at the cabinet table has dropped to five from eight. Smith has said she wanted a better balance of rural and urban MLAs in cabinet. Nearly half of ministers are still from Calgary.

The new cabinet has six MLAs who have never served as ministers.

First elected the MLA for Lethbridge East in 2019, Neudorf is now one of two deputy premiers in Smith’s government.

Neudorf said Smith likely offered him the infrastructure portfolio because of his 25 years working in commercial construction.

“I have a lot of connections with that community, worked in that community,” he said. “They have some unique challenges right now in terms of the supply chain and and order times and all those kinds of things. So I’m very excited to bring that experience to bear on those topics.”

Toews, who placed second to Smith in the leadership race, is back in the finance portfolio. The Grande Prairie-Wapiti MLA stepped down from cabinet at the end of May to run to succeed Jason Kenney as party leader.

Political observers wondered if Toews would accept if Smith offered him a post. On Friday, Toews said he decided he could support the priorities of the new government after meeting with Smith.

Smith has signalled she wishes to spend some of Alberta’s budget surplus on Albertans who need extra help. Toews, whose focus was on paying down debt, said he can work with that.

“Fiscal responsibility will continue to be a a top priority certainly of mine, but you know, it’s also critical that Treasury Board funds government priorities,” he said. ” And so there’s always a tension between the two and I’m certain we can find the balance.”

Critics on Friday decried the elimination of labour and housing as named ministerial portfolios.

In a news release, Alberta Federation of Labour President Gil McGowan said Smith’s move “made it very clear she doesn’t care about Alberta workers, other than as units of production.”

Public Interest Alberta said in a news release that no dedicated housing minister shows Smith is out of touch with the problems of increasing homelessness and rising housing prices.

Smith’s press secretary says the jobs, economy and northern development minister will be responsible for labour, and the seniors, community and social services portfolio will include housing.

Returning to cabinet is Devin Dreeshen, who resigned as agriculture and forestry minister last year when staffers alleged he frequently drank alcohol in the legislature and was abusive when intoxicated.

A former employee who raised concerns about Dreeshen is suing the government for wrongful termination.

In a live webcast with the Western Standard Friday afternoon, Smith said some people left out of cabinet were the “hand of the former premier” on some of the most troublesome files Premier Jason Kenney’s government tackled.

Her press secretary said Smith was not doing other media interviews on Friday.

In the Western Standard webcast, Smith said she wants her cabinet picks to represent “stability but boldness.”

She pledged Savage and Guthrie will make progress in tackling the blight of abandoned oil and gas sites across the province.

A swearing-in ceremony is scheduled for Monday at 11 a.m.