Athletics vs Yankees: Out with the Old 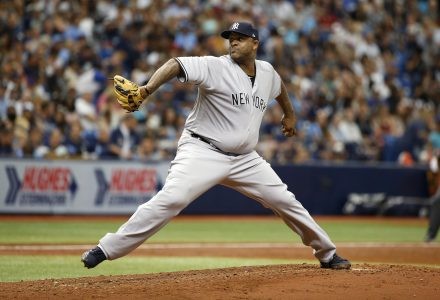 After yet another mostly discouraging road trip that saw the A’s go 1-5 and have their record away from the coliseum somehow worsen, once again, to a grand total of 9-25, the A’s will still return to Oakland with a shot in the arm. At long last, this A’s team is starting to shape into something worth watching. Ryon Healy has been a regular power presence in Oakland’s lineup for a full year, now. Chad Pinder has forced himself in the lineup every day and Matt Olson is looking more and more comfortable at the plate when he gets a chance to start. Jaycob Brugman was called up to shore up Oakland’s shaky outfield defense, and it was announced last night that top prospect Matt Chapman was getting called up to take over the lion’s share of starts at third base. And there is a chance that the only reason this team isn’t seeing other top prospect Barreto right now is because of Lowrie’s late-career resurgence.

So it matters much less now that the A’s are as far behind in last as they are, because the team is getting incrementally better with the youths, and now fans will be subjected to significantly less representative product veteran mediocrity.

The Yankees dropped the final two games of their road series with the Angels, both propelling the Angels passed the .500 barrier that has proven near-impossible for non-Astros teams in the AL West to crack, even this late in June, as well as allow the Red Sox to creep up within two games of the Yankees in first place in the AL East. The Yankees have been undergoing a youth movement, like the A’s are right this now, slowly and surely during the last couple of seasons, but it wasn’t until this year that the Yankees fully embraced their incoming stars and allowed them to start leading the squad, and it has paid huge dividends for the team this season. Aaron Judge has showed no signs of slowing down, as the league still hasn’t adjusted to the right fielder, and the rookie is leading the American League in every Triple Crown category. He is the leading force driving an offense that is on pace to obliterate the franchise’s record for home runs hit in a season. The pitching staff for New York has also made steady improvements in recent weeks even with CC Sabathia going down with injury and Masahiro Tanaka’s general struggles.

Aaron Hicks was in danger of never realizing his full potential as a five-tool player, as each of his previous stints in the show were nothing short of disasters. But this year Aaron Hicks is turning into the player that the Minnesota Twins long hoped they were getting, as the outfielder has a .424 on base percentage to compliment a .578 slugging percentage, and he has nearly matched his career high in home runs with ten (and plays good defense, to boot).

Rookie Jordan Montgomery has turned his poor start to the season around and over his last handful of starts has more than halved his walk rate to pair up with his elite strikeout rate, and is now the leader, or amongst the leaders, of all American League first-year pitchers in stats such as K/9, HR/9, and FIP.

All games are on NBCSCA, but Friday’s game is also on the MLB Network for out-of-marketers.

With Matt Chapman coming up its fair to say that the veterans, apart from Yonder Alonso and Jed Lowrie, have had their chances to start regularly and have thoroughly played themselves out their regular starting roles, and the A’s, whether they start winning more or not, will start to play like a whole new ball club. A club that plays solid fundamental defense overall, and even has elite defense at both corners of the diamond, and a club that has a more complete offense rather than one that solely aims to hit a home run on every swing and not much else. If the player position side of the A’s can do simply that, the team will improve by leaps and bounds and boost their chances in each game.

On the pitching side, as strong as the Yankees rotation has been, the Yankees are running into the best part of the A’s rotation and each game looks to be a good, though tough, matchup for Oakland.