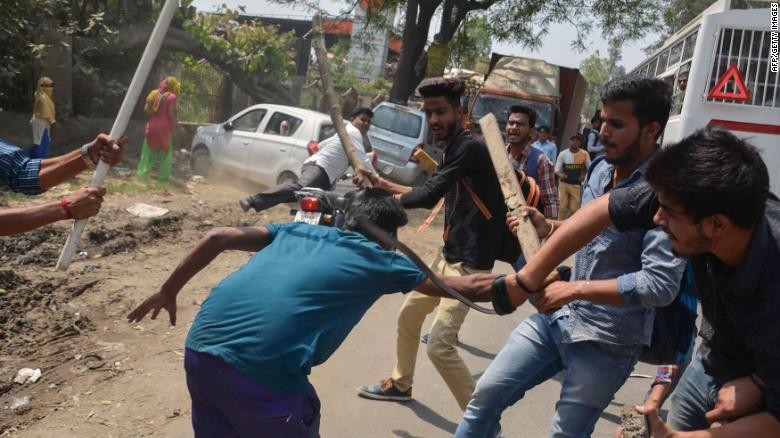 Eight people died in three Indian states on Monday as tens of thousands of lower-caste Indians demonstrated violently against a recent Supreme Court ruling that they say dilutes protections for the Dalit community.

Protesters halted railway traffic, forced shops to close and made their presence felt in at least 10 states. As the day began, protests were peaceful, but they quickly turned violent, with local media reporting clashes between police and protesters in Madhya Pradesh, Uttar Pradesh and elsewhere. Violent protests were reported in at least seven states.
According to Rahul Jain, the head of the Gwalior district administration in Madhaya Pradesh, three people were killed there when protests turned violent. There was one death each in Madhya Pradesh’s Bhind and Morena districts, according to local officials. 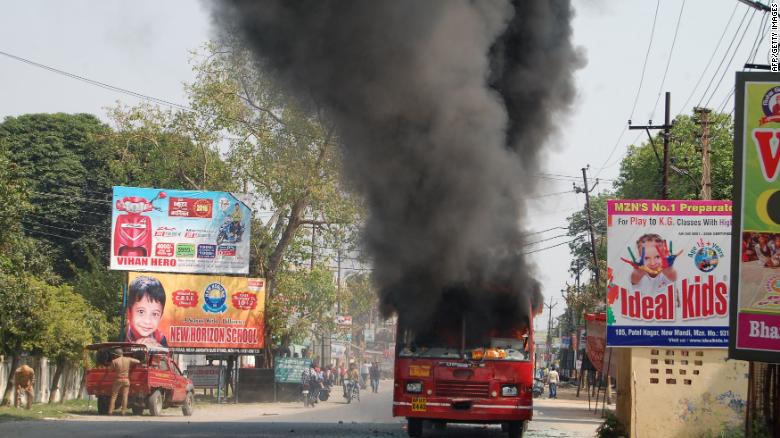 An Indian public bus burns during countrywide protests against a Supreme Court order seen as diluting protections afforded to lower castes.
Police imposed a curfew in parts of Madhya Pradesh immediately after the first death, police Supt. Ashish Singh from the Morena district told CNN.
Two people died in the northern state of Uttar Pradesh, and one death was reported in the northwestern state of Rajasthan, local officials said. 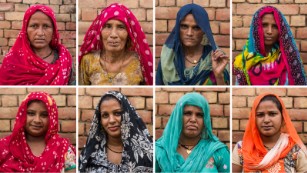 2016: Sexually abused and seen as the lowest of the low — life as an ‘untouchable’ Dalit woman
In Punjab, the state with the highest percentage of India’s low-caste Dalit population, protesters effectively shut down the northern state, forcing the government to halt public transportation, close banks and educational institutions and postpone high school board exams.
Not all the protests were violent or as large in scale, with peaceful demonstrations occurring in Delhi, the nation’s capital.
In Hinduism’s caste system, Dalits are traditionally at the bottom rung. Members of the higher caste sometimes consider them impure, and in certain places, they still aren’t allowed to enter the homes or temples of the upper-caste community or share utensils with them. 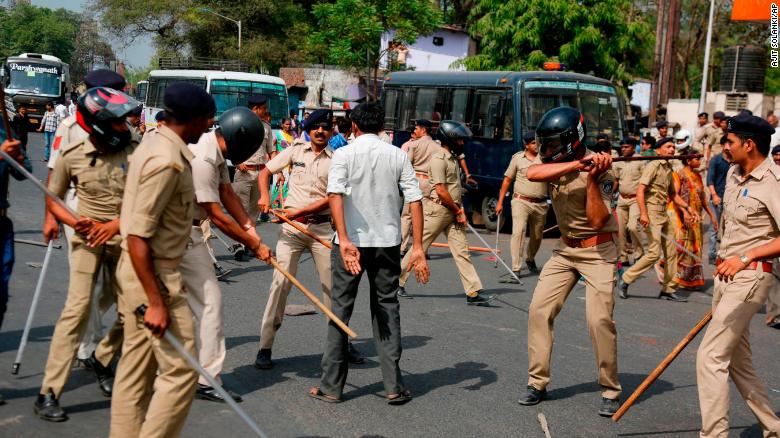 Police beat a lower-caste Dalit man in Ahmadabad on Monday as demonstrations spread.
This practice, despite being unconstitutional, is still prevalent in parts of India, and Dalits continue to struggle with instances of discrimination, exclusion and violence.
Earlier on Monday, Law Minister Ravi Shankar Prasad accused opposition parties of politicizing the issue. He said that the government does not agree with the Supreme Court’s order on the issue and has filed a review petition asking that the judgment be revised.
On March 20, the Supreme Court ruled that police couldn’t immediately arrest someone upon the filing of criminal charges under the Scheduled Caste and Scheduled Tribe (Prevention of Atrocities) Act, which governs how the government prosecutes cases of hate crimes against lower-caste people and people belonging to tribal communities. 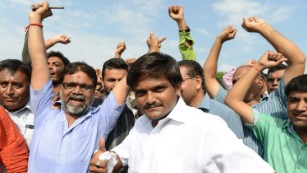 2016: India’s caste system — outlawed, but still omnipresent
The court’s judgment allows police to conduct a preliminary inquiry into the accused before the beginning of a formal investigation. The aim is to prevent false accusations.
Members of the Dalit caste say the court ruling will add an additional obstacle to having formal charges brought against people who commit crimes against them.
Police registered more than 47,000 cases of crimes against people belonging to a lower caste or from a tribe in 2016, according to the latest national data.
These are the largest protests by Dalit groups since January, when they alleged that right-wing Hindu groups used violence to try to suppress a celebration in honor of celebrated Dalit rights leader B.R. Ambedkar.
Share
Facebook
Twitter
WhatsApp
Pinterest
Linkedin
ReddIt
Email
Print
Tumblr
Telegram
Mix
VK
Digg
LINE
Viber
Naver
Previous articleCalifornia over federal land sales,Trump administration sues
Next articleCourt docs say, Mom deployed Taser on son to wake him up for church