Alvarez, Pascal both need victories, but for different reasons 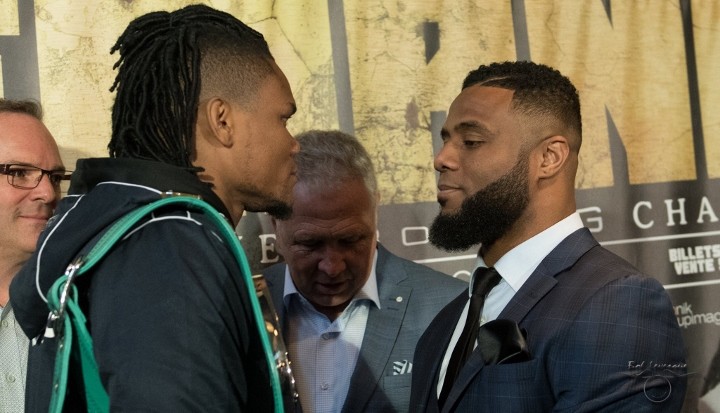 Eleider Alvarez is looking for a title opportunity. A victory over Jean Pascal on Saturday will pave the way.

Eleider “Storm” Alvarez and Jean Pascal are light heavyweights going in opposite directions.

The undefeated Alvarez is on the ascent and has been sitting as the mandatory challenger for world champion Adonis Stevenson since November 2015. The title fight has been delayed for various reasons, though Alvarez has stayed active and he now knows he is one win away from actually getting the opportunity to fight for the title.

Pascal, the former world champion, is fading fast. He’s just 2-2 in his last four fights and could easily be 1-3 but for the kindness of the judges who awarded him a highly controversial 10-round decision against Yunieski Gonzalez in 2015. The two official losses were both rough knockouts to then-titleholder Sergey Kovalev.

Alvarez and Pascal, who both fight out of Montreal, both need a victory, but for different reasons: Alvarez to get to the title fight and Pascal to salvage what is left of his career. They will square off in a 12-round fight on Saturday (Showtime, 9 p.m. ET) at the Bell Centre in Montreal on the undercard of the rematch between Stevenson (28-1, 23 KOs) and Andrzej Fonfara (29-4, 17 KOs).

An Alvarez win will send him into a world title fight next against the winner of the main event. A Pascal loss probably finishes his career as a meaningful fighter.

Alvarez, who is risking his mandatory status, became the mandatory challenger in November 2015 by virtue of a majority decision win against Isaac Chilemba, and he has won three more fights since while awaiting the title fight, most recently finishing off the remnants of former super middleweight titlist Lucian Bute, Montreal’s biggest boxing star.

“I’m fully ready for my title shot. I’ve been ready for 18 months, but for some reason it didn’t happen,” said Alvarez, a 2008 Olympian for Colombia before relocating to Montreal to turn pro. “I’m ready to face everybody. I’m probably in the toughest division in boxing right now, but once Stevenson comes, I’ll be ready.

Pascal is as battle tested as they come. He has beaten Bute, Chad Dawson and Adrian Diaconu, lost to Carl Froch and faced Bernard Hopkins twice, getting a draw in the first fight and losing the title in the rematch.

He knows he needs the win against Alvarez badly and is counting on his experience to carry him to victory.

“Winning is the only option for me,” Pascal said. “I’ve been in some battles, but my tank is still full.

“He has a lot of experience, but experience can be negative sometimes,” Alvarez said. “He’s experienced, but he has negative experiences and losses, too. I don’t think it will be a factor Saturday night. My style will be an advantage. I’m taller; I have a longer reach, and a better jab. My footwork is better, too. So I think my style is my advantage.”

Alvarez and Pascal are quite familiar with each other as they prepare to face off. They have trained in the same camp together previously when they were both trained by Marc Ramsay — who remains Alvarez’s trainer — and have sparred together. How much of a difference that might make come fight night is up for debate.

“Sparring with him is an advantage, but it was a long time ago, and now he’s changed teams,” Alvarez said. “So I don’t know what he’s done in his training camp this time.

“Marc taught me some tricks, but I already know Jean Pascal because I trained with him and sparred with him for a while. It’s an advantage to have Marc, but it can be different, and you never know what he’ll bring to the ring this time around.”

Said Pascal, who is trained by Stephane Larouche with assistance from Roy Jones Jr., “Sparring with Alvarez isn’t really an advantage for me. The last time we sparred was like two or three years ago. I know him, but he knows me, also. I actually have two strikes against me — he knows me well, but his coach knows me by heart because he’s my former coach. But none of that matters. I’ve done my homework and I know what to do in the ring.

“Right now my focus is on Alvarez. After the referee raises my hand, we’ll see what’s next.”