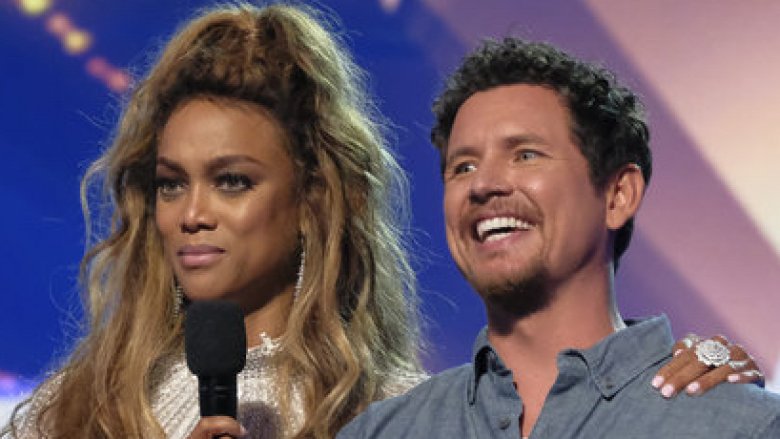 One America’s Got Talent contestant found himself in trouble with the law — just a day after he filmed the popular show’s finale.

AGT’s Michael Ketterer, who sang his way to becoming a finalist on the series’ 13th season, was arrested in Hollywood on Thursday, Sept. 20, 2018, according to TMZ. Ketterer had reportedly gotten into a fight with his wife, and, when authorities showed up to the scene of their alleged altercation, they allegedly saw a red mark on the woman. This prompted Los Angeles Police Department officers to arrest Ketterer for felony domestic violence.

Ketterer was later released from jail after posting $50,000 bail.

Ketterer has reportedly claimed that the entire incident was a “misunderstanding.” While he admitted to fighting with his wife, he alleged that she never wanted to press charges against him, but cops handcuffed him anyway.

TMZ shared video footage that appears to show Ketterer in the backseat of a police vehicle, speaking to a police officer while in custody.

Sources within law enforcement reportedly told TMZ that Ketterer’s charges will likely be downgraded to a misdemeanor, as his wife’s injury wasn’t severe. The Los Angeles City Attorney will likely handle his case.

Michael Ketterer, a singer, recently gained some nationwide name recognition, as he’d made it pretty far in AGT. He’d even made it into the top ten final contestants and ultimately finished in fifth place.

Ketterer — who is a pediatric mental health nurse from Tennessee — has long discussed his family life with the American public. In his season 13 audition, he opened up about his family and his hope to encourage his six children to always go after their goals. “My family’s the reason that I’m here — my wife and my six children,” Ketterer told the AGT judges at the time. “You know, one of the things that happens, especially because my kids came out of foster care — when you’re surviving, you can’t dream. And that has been one of the most rewarding things, providing them with a home and a safe environment where they’re free to dream.”

He continued, “So, I’m here cause I want to show them that if their dad can live out his dreams, then nothing’s impossible for them.”

Ketterer then sang “To Love Somebody” by the Bee Gees, and, following his performance, judge Simon Cowell pressed the Golden Buzzer, automatically sending him through to the live shows.

Throughout his time on the NBC show, Ketterer continued to tug at the heartstrings of America. During his quarter finals performance, he caused Cowell to cry after sharing that his wife and daughter had almost died during childbirth (via TMZ). He later sang “Ain’t No Mountain High Enough” during the first part of the AGT season 13 finale and said that he “was dedicating [the song] to my God because he moved mountains” (via People).

Following one of Ketterer’s performances, Cowell gave a shout-out to country crooner Garth Brooks, encouraging the artist to work with Ketterer. And, surprisingly, Brooks responded, inviting Ketterer to sing at his sold-out concert at Notre Dame Stadium on Oct. 20, 2018. “We’re going to suit you up with a band. We’re going to put you out in front of 85,000 of the sweetest people you’ve ever played for before, and they’re going to be pulling for you like no other,” Brooks told Ketterer via his Facebook Live series, Inside Studio G. “This is going to be good.”

Brooks also wrote a song for Ketterer to sing during the AGT finale. The track was called “The Courage To Love.”

However, following Ketterer’s domestic violence arrest, the former AGT contestant will no longer be performing at Brook’s show. During his Facebook Live show on Monday, Sept. 24, Brooks shared that he and Ketterer determined that “it was better” if he no longer joined him on stage.

Brooks also commented on the future of the song “The Courage To Love,” revealing that he would record it — though it may sound different than what people remember from the show. “Here’s the deal: it’s a demo. It’s something you just write for somebody else,” he said. “So it doesn’t even sound like me, it doesn’t sound like me at all. But we can fix this demo up and get it out because the main thing is the song and its message.”