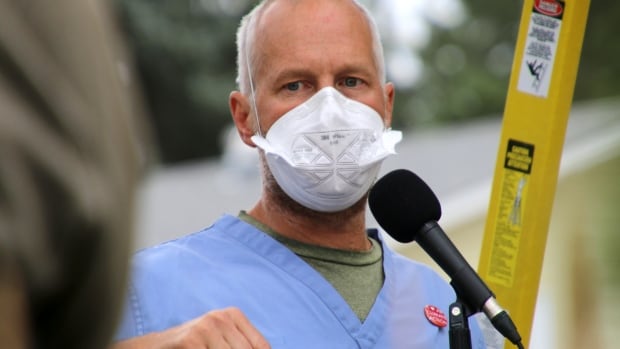 A group called ProtectOurProvince Alberta launched a series of COVID-19 briefings Monday to “fill the void” left by the provincial government, which hasn’t held any pandemic briefings for weeks as case counts and hospitalizations have surged.

ProtectOurProvince describes itself as a grassroots coalition of physicians, scientists and citizen advocates. It was formed in July in reaction to the scaling down of Alberta’s COVID-19 protection measures.

The last time Alberta Premier Jason Kenney addressed Albertans was on Aug. 9 at a conference to announce the expansion of an Edmonton brewery that promised to create 25 jobs.

His office said last Thursday that he had been on vacation for two weeks, but he was “still able to fully communicate with his cabinet and senior officials as required” and has “participated in numerous briefings on important subjects — including on COVID-19.” The statement said Kenney would be back at work this week.

On July 29, the Alberta government loosened its rules so that quarantine for close contacts of COVID-infected people was no longer mandatory, contact tracers no longer notify close contacts, and asymptomatic testing is no longer recommended.

ProtectOurProvince says its briefings will be conducted by experts who will “analyze each day’s COVID statistics and provide commentary to help Albertans understand risks and protective measures.

“These briefings will seek to fill the void our government has created,” the group said in an emailed release.

Doctors and scientists sounded the alarm during Monday’s briefing, over the current state of hospitalizations and the worsening fourth wave.

“The vacuum of leadership and knowledge we’ve had over the last three to four weeks is deeply concerning to me and unacceptable,” said Dr. Kate Bisby, a family doctor.

Alberta reported 3,056 new COVID cases over the weekend with a positivity rate of 10.41 per cent, as the number of people in hospital with the virus reached 401.

There were 11,426 active cases across Alberta — an increase of 1,771 from the last data update. Ontario, a province with about three times more people than Alberta, has 6,028 cases.

More than 15,000 tuned in to the briefing and panellists took questions from viewers on topics ranging from the risk COVID-19 poses to children to Alberta’s move to offer third doses to immunocompromised people.

Vipond pointed to the increasing case counts and test positivity, as well as a doubling time that has dropped to 13 days, as some of the reasons for concern.

“We really don’t have very far to go before the system is completely overloaded, not just because of the number of cases but because of burnout,” said Dr. Ilan Schwartz. “I’ve never seen my colleagues in the ICU more despondent in the last week … in part because this wave is entirely preventable.”

Upcoming briefings will cover the safe return to school, on Wednesday, and the importance of airborne transmission, on Friday.

The briefings can be viewed on ProtectOurProvince’s YouTube page.