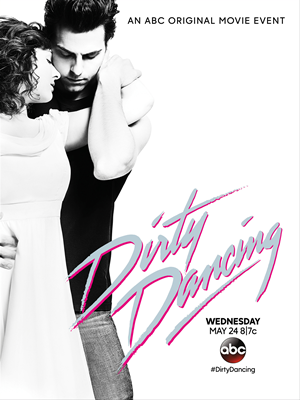 Welcome back to Kellerman’s, where there’s been some light renovations since your last visit.

ABC’s Dirty Dancing remake premiered on Wednesday night, bringing the summer romance between Johnny Castle (Colt Prattes) and Baby (Abigail Breslin) from the big screen in 1987 to the small screen in 2017. Still set in the summer of 1963, Breslin had said the new movie “for the most part it really does stay true to the original,” and it really did. Baby still carried a watermelon. She still left that corner. They still did the lift.

However, there were some pretty significant changes, including vocal performances, and finding out if Johnny and Baby’s romance ever continued beyond the end of that summer season…

1. The Ending: The original movie ended with Johnny and Baby dancing, letting us all believe their summer romance would be endless. The new version? Nope! It goes 12 years in the future, showing us what happened to Johnny and Baby. Baby goes to see Dirty Dancing on Broadway in 1975, choreographed by Johnny, who later told her he was inspired by her book. It’s clear the two haven’t seen each other in a long time, but there’s still major chemistry…until her daughter runs into the theater, soon followed by Baby’s husband, Charlie. It’s a very La La Land ending, as they both got their happily ever after, just not together.

2. Dance Lessons: In the new version, Johnny only accepts the money from Baby to pay for Penny’s abortion if he actually gives her dance lessons, since he doesn’t want a hand-out. (He does end up paying Dr. Houseman back, who later demands Robbie give Penny the money as well.)

3. We Can Deal With Neal: While Mr. Kellerman’s nephew was fairly obnoxious in the original, he’s a pretty good friend to Baby in this version.

4. The Water Lift: This is pretty tiny, but still noticeable for us: When Baby and Johnny practice their lift in the water, they weirdly start with her jumping off the dock into the lift. It doesn’t seem safe?!

5. Lisa’s New Love: Baby’s older sis does dabble with Robbie, the Harvard-bound waiter who is still the worst, but really ends up connecting with Marco (J. Quinton Johnson), the lead singer and guitarist in Tito Suarez’s band. They perform a duet at the talent show after he teaches her how to play the ukulele. And thankfully, Lisa was given more personality in this version and the relationship between the Houseman sisters was amped up, a much-needed update.

6. Song and Dance: No one sang in the 1987 version, but the 2017 version featured a few musical numbers, including solos for Katey Sagal (a sultry “Fever” with an assist from Prattes), Debra Messing (a wistful “They Can’t Take That Away”), and a Johnny-Baby duet to accompany their dance on “(I’ve Had) The Time of My Life.” Of course, Nicole Scherzinger also sings, with Bruce Greenwood‘s Dr. Jake Houseman briefly getting in on the action, too.

7. Vivian the Vixen: While the film still doesn’t have someone say the word “abortion” when it comes to Penny’s storyline, the “D” word is used quite a bit: Divorce! Vivian (Sagal) is actually divorced from her husband in this, and still very into Johnny. She also connects with Baby’s mom, Marjorie (Messing), which leads to our favorite change…

8. More for Marjorie: While she was barely a character in the original (Justice for Kelly Bishop!), the writers smartly added more depth to Marjorie, who is unfulfilled with the current state of her marriage and wants more. She even calls a lawyer and tells Jake she wants a divorce, saying, “I’d rather be alone than lonely.” While there’s ultimately a happy ending for the couple, it was a breath of fresh to see Marjorie refuse to settle and demand more.

What did you think of ABC’s Dirty Dancing remake? Sound off in the comments!