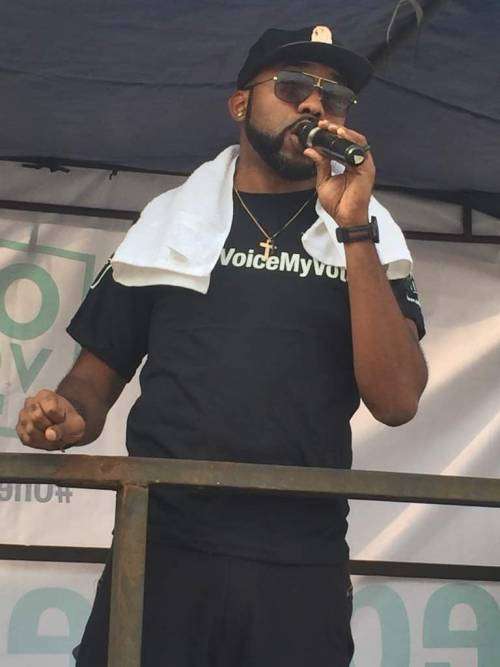 2face says voters’ card is the most powerful tools in a democratic government, charging Nigerians to massively register to vote.

Celebrities and Civic Society Organizations have taken to the streets nationwide to educate Nigerians on the importance registering to vote ahead of the 2019 elections.

Pop stars, Innocent ‘2face’ Idibia and Bankole ‘Banky W’ Wellington were among celebrities who led the march that  simultaneously took place in 18 states and the federal capital territory.

The sensitisation took place under the auspices of One Voice Nigeria.

Idibia urged Nigerians to massively register to vote, adding that voter’s card is the most powerful tools in a democratic government.

“From the last election, the people should know that their vote would count but this time around, let’s do it on a double level. Everybody that is eligible should register to vote. The voter’s card is a powerful tool because if you don’t vote, you don’t have right to complain. The first step for the citizen to change Nigeria is to register to vote,” the musician said.

He appealed to the Independent National Electoral Commission (INEC) to recruit staffers who would be willing to do their jobs and register more people to vote.

On his part, Banky W called on Nigerians to come out en masse to vote so that they can hold politicians accountable for what they promised during the campaign.

He added, “This can also make us hold INEC on what happened to our votes after voting.

“The power lies with the people so we need to register and vote. Your voter’s card is worth more than money and it will make us benefit from a better Nigeria”.

Founder and Chief Executive Officer of Now Muzik Limited, Efe Omorogbe, which who also joined the march, charged Nigerian youths to be actively involved in politics.

He said, “If you make the kind of mistake the elderly ones made, Nigeria will continue to suffer and become worse. Political issues determine educational policies, how the police function and state of employment in the country.

“The youths should not just stay on social media; they should be politically inclined and involved.  Move beyond complaining, get active. The most ignorant person is he who decides not to get involved in politics and not vote. The right to complain begins with registering to vote and vote.”

The Executive Director of Enough Is Enough Nigeria, Mrs Yemi Adamolekun, also urged INEC to work more on disseminating information to the masses and ensure voters are not systematically disenfranchised by its activities.

Former Presidents Olusegun Obasanjo and General Ibrahim Babangida had in a separate open letters to President Muhammadu Buhari asked the President not to seek a re-election in 2019 and allow a younger candidate to lead the nation.

In the explosive letters which unsettled the country’s political sphere, the two leaders re-echoed the opinions of many Nigerians that the Buhari administration has failed to deliver on its campaign promises.