15 highlights from the Buckingham Palace tour 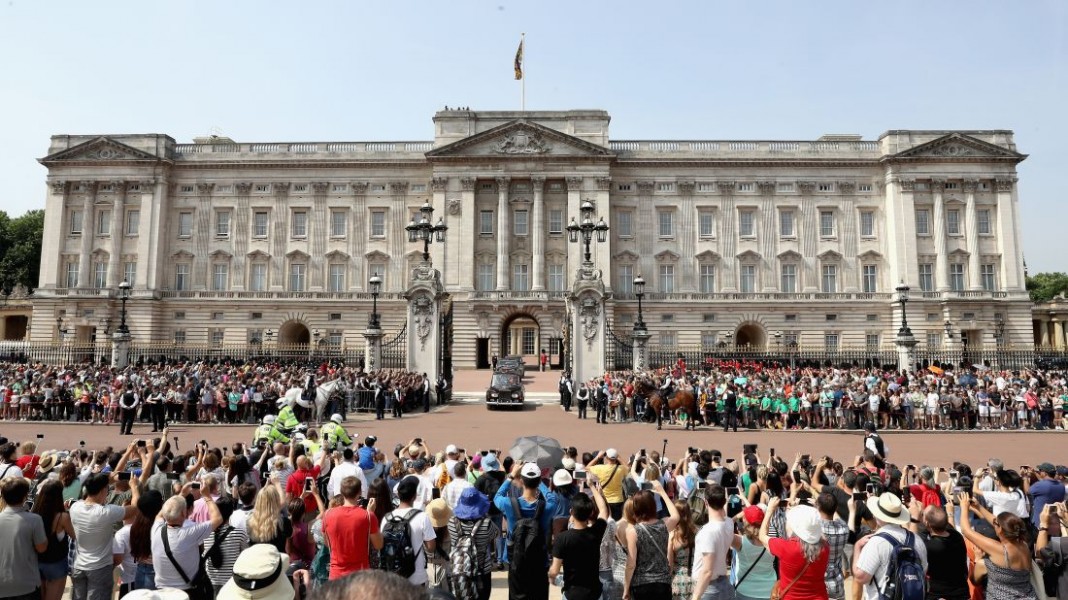 15 highlights from the Buckingham Palace tour

Historic residences don’t get much more regal than Buckingham Palace in London.
Originally owned by the Duke of Buckingham, Buckingham House (as it was known then) was bought by King George III for his wife Queen Charlotte in 1761.
He eventually transformed the one-time townhouse into a palace and Queen Victoria became the first sovereign to live there in July 1837.
The landmark has been the London residence of Queen Elizabeth II since her accession to the throne and opened its doors to the public nearly 25 years ago.
Interest in the Queen has grown in recent years, partly because of the success of television shows such as “The Crown,” which focuses on the early years of Britain’s monarch, and events such as the impending wedding of Price Harry and Meghan Markle.
Marvel at the royal grandeur of the halls that have been home to British kings and queens for 180 years.
The second season of the royal drama starring Claire Foy and Matt Smith will be released on streaming service Netflix in December 2017.
Although the majority of Buckingham Palace’s 775 rooms remain out of bounds, the organized tours, which usually run from late July to late September, allow visitors access to all 19 State Rooms, the Palace Gardens and the Royal Mews.
From the grand staircase, to the artwork, sculptures and state coaches, the Buckingham Palace tour is packed with remarkable sights. Here’s our pick of the top 15 highlights:

The spectacular grand staircase is one of the first things you’ll see during the tour — and it’s also one of the best. Designed by architect John Nash as part of his commission to renovate the palace for King George IV back in the early 1800s, it features a gilt-bronze balustrade decorated with intricate designs of acanthus, oak and laurel leaves.
The stairs, which lead up to the State Rooms, are lit up by a beautiful dome in the ceiling and the walls on the upper landing are adorned with portraits of the Queen’s ancestors.

No one knows the palace better than the royals themselves, so who better to introduce the audio guide than Prince Charles, who was actually born there?
All visitors receive the free audio guide, available in English, French, German, Spanish, Italian, Brazilian Portuguese, Japanese, Russian and Mandarin.
There’s also a family audio guide (available in English only) with an activity trail suitable for children between seven and 11 years old.

Commissioned by George IV to mark the fall of Napoleon, “Mars and Venus” by celebrated sculptor Antonio Canova is a sight to behold. The sculpture, located in the Marble Hall, depicts the Roman god of war and the Roman goddess of love in a romantic clinch and was carved from a single block of marble.

The royal family pose in the Throne Room for the Duke and Duchess of Cambridge’s official wedding photos.
Hugo Burnand/AFP/Getty Images
While you won’t get to sit on them yourself, being in the presence of the thrones at the palace is something of an experience. Raised on a platform in the Throne Room, the red and gold chairs ooze grandiosity and have the initials of Queen Elizabeth and Prince Philip sewn into their fabric.
While the Throne Room was used as a ballroom when Queen Victoria was monarch, it’s largely used as a backdrop for royal wedding photographs nowadays.

The Picture Gallery — one of 19 State Rooms at Buckingham Palace.
Nick Ansell – WPA Pool/Getty Images
Originally created to display King George VI’s magnificent art collection, the Picture Gallery boasts some of the most beautiful paintings from the royal portfolio.
While the display changes regularly as the Queen often loans out the artwork, highlights include self-portraits by Rembrandt and Rubens, Anthony Van Dyck’s “The Virgin and Child” and various works by Venetian painter Canaletto.

The White Drawing Room is one of the most opulent state rooms at the palace, and its standout piece is a stunning grand piano made for Queen Victoria.
Built by the company S & P Erard in 1856, it was gilded by François Rochard and decorated with elaborate oil-painted scenes of cherubs and singeries — humorous vignettes of monkeys playing musical instruments and causing trouble.
The piano was regularly used by Queen Victoria and Prince Albert, both accomplished pianists who enjoyed playing together.

Buckingham Palace holds an outstanding collection of Sèvres porcelain made by Manufacture Nationale de Sèvres, considered the finest porcelain producer in Europe from the mid-18th century.
The majority of the pieces were obtained by King George IV, who was an enthusiastic collector of Sèvres, between 1783 and 1830.
Related content

Some of the most striking include a potpourri vase in the form of a ship that originally belonged to Madame de Pompadour, mistress of Louis XV, which can be seen in the Green Drawing Room, as well as the “Table of the Great Commanders of Antiquity”, made for Napoleon but subsequently gifted to George IV by Louis XVIII. This piece is located in the Blue Drawing Room.

A signed photograph from John F. Kennedy on display during the ‘Royal Gifts’ exhibition in 2017.
TOLGA AKMEN/AFP/Getty Images
Buckingham Palace puts on a different exhibition every summer as part of the public opening. Last year’s was named “Royal Gifts” and displayed a variety of presents given to the Queen by the likes of former US president John F. Kennedy and former South African President Nelson Mandela.
The 2018 opening will include an exhibition that marks the 70th birthday of Prince Charles.

The Ballroom hosts state banquets, where guests dine with silver-gilt from George IV’s Grand Service.
Peter Macdiarmid/Getty Images
At 37 meters long and 18 meters wide, the Ballroom is the largest and most ostentatious room at the palace. Inspired by Italian Renaissance design, it first opened in 1856 to mark the end of the Crimean War and is now used for investitures and state banquets, where the Queen hosts heads of state and about 170 guests.

Can you spot the secret door in the White Drawing Room?
Nick Ansell – WPA Pool/Getty Images
One of the most intriguing sights in the White Drawing Room is almost completely hidden from view. It’s connected to the Queen’s private rooms via a secret door, which she uses to enter the State Rooms when meeting guests.
Eagle-eyed visitors may just be able to make out the door, which is concealed behind what looks like a cabinet.
Related content

World’s most visited palaces and castles

The Music Room is the central room on the West Front of the Palace.
Nick Ansell – WPA Pool/Getty Images
The Music Room is one of the last destinations on the tour. It’s sometimes used as a venue for recitals and features a grand piano by John Broadwood & Sons.
The grand furniture on display originally belonged to George IV and was supplied to him by Parisian chair and bedmaker Georges Jacob in the late 18th century. Numerous royals have been christened in the Music Room including Prince Charles and Prince William.

The Palace gardens house 30 species of bird, 150 mature trees and 322 types of British wild flower. Visitors keen to explore the grounds have the option to take a combined tour of the State Rooms and the Palace Gardens at an extra cost.
The tour kicks off with a talk inside the Palace, followed by a guided walk around the 39-acre garden, where you’ll see a three-acre lake, a 156-meter herbaceous border, the wisteria-covered Summer House, a rose garden and a 15-foot waterloo vase, which is one of Britain’s biggest garden ornaments.
The tennis court, where King George VI once played Wimbledon champion Fred Perry in the 1930s, is also on the itinerary.

The gilded eight horse-drawn State Coach is on display in the Royal Mews.
ADRIAN DENNIS/AFP/Getty Images
A Royal Day Out ticket to Buckingham Palace includes a free 45-minute guided tour of the Royal Mews (as well as entry to the State Rooms and the Queen’s Gallery), which is one of the finest working stables in the world.
Here visitors are treated to the impressive sight of various historic coaches and carriages, some of which are still used by the monarchs. The stand out is the Gold State Coach, which was built for George III in 1762 and weighs almost four tonnes. It’s been used for every coronation since 1821 and needs eight horses to pull it because of its heaviness.
Many of the Queen’s horses, including the famous Windsor Greys that drew the private carriages of the royal family during Queen Victoria’s reign, are kept at the Mews.

15. Changing of the guard

The Old Guard at the Palace switches duty with the New Guard.
Dan Dennison/Getty Images
The Changing of the Guard, a formal ceremony in which the New Guard exchanges duties with the Old Guard, takes place outside the palace between 11:00 a.m. and 11:45 a.m. every day during April until the end of July (it takes place on alternate days throughout the rest of the year). The ceremony is conducted on the Palace forecourt , so if you time your Buckingham Palace tour well enough, you’ll be able to catch it.
Buckingham Palace will be open to the public from Saturday, 21 July 2018 to Sunday, 30 September 2018. The State Rooms Tour is available for about $32 for adults and $18 for under 17s . The State Rooms and Garden Highlights Tour costs about $43 for adults and $26 for under 17s. A Royal Day Out ticket (adults about $52, under 17s $29) gives access to the State Rooms, the Queen’s Gallery and the Royal Mews. Children under five years old are free of charge. Exclusive guided tours are often available during December, January, Easter and September.
Tickets bought directly from Royal Collection Trust can be converted into a one-year pass, which provides complimentary admission to the site (or sites) you have visited for 12 months.
Buckingham Palace, London
See how billionaire businessman Tony Elumelu spent his weekend (photos)
Photos: President Buhari arrives Jordan for Counter Terrorism Summit
Peter Obi Former Governor hails GEJ at 60, mourns Ekwueme
Queen Elizabeth II receives Nigeria’s High Commissioner to the UK, retired Supreme Court judge George A. Oguntade
NSCDC arrests 5 persons with 2 truckloads of suspected stolen diesel In Delta State
I did it out of love and care” – Mother put her ‘naughty’ seven-year-old daughter in chains to protect her
Ogun State Commissioner for Commerce and Industry, Bimbo Ashiru resigns