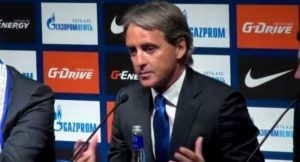 Mancini said this on Tuesday at a news conference upon his arrival in St Petersburg, Russia.

The club appointed the 52-year-old as its new manager at the beginning of the month after failing to qualify for the championship for the second year in a row. Former coach Mircea Lucescu left as a result.

Zenit, which finished third in the Russian Premier League, said in a statement that they have signed the Italian manager on a three-year contract with the possibility of a two-year extension.

A source familiar with the contract told Reuters that Mancini would be making 4.5 million euros (£3.9 million) a year.

Mancini is one of the highest-profile foreign coaches to join the Russian Premier League in recent years.

Zenit, which is financed by Russian energy giant Gazprom, has used its deep pockets to attract pricey foreign managers in the past, including Dick Advocaat, Luciano Spalletti and Andre Villas-Boas.

Mancini has coached a number of elite sides including Inter Milan, Galatasaray and Manchester City.