Woman shoved to ground by officer in video was armed with knife, Edmonton police say 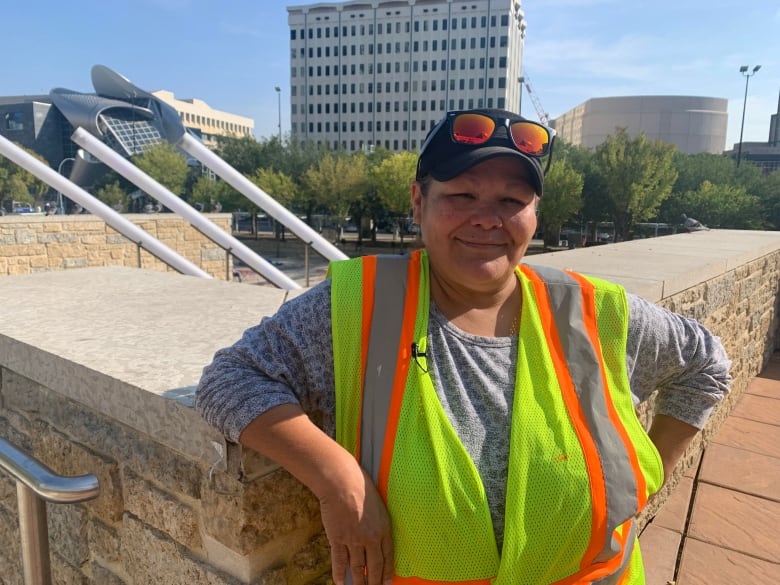 Edmonton police say an officer shown on video roughly shoving a woman to the ground was attempting to disarm her, alleging she had a knife.

Police responded after a video of the incident was posted to social media on Friday.

The 13-second video shows a woman walking out from behind an Edmonton Police Service vehicle while an officer walks up quickly behind her.

As the woman begins to turn around toward him, he roughly shoves her. She hits the pavement and goes rolling on the ground. As she moves to get up, the officer grabs her arms, forcing her back down as he handcuffs her. A second officer runs on screen just as the video ends.

In a statement Friday afternoon, EPS spokesperson Cheryl Voordenhout said the video captured police response to a weapons complaint in the area of 100th Street and 106th Avenue just after 4 p.m. on Thursday.

She said the officer was flagged down by someone who reported two women, one of whom was armed, about to fight.

Voordenhout said the officer found the women and saw one had a knife. She said the officer ordered her to drop it but that she refused and instead expressed her affiliation with a criminal gang and walked away.

“The officer considered his use of force options, given the suspect was armed, and determined pushing her to the ground would require the least amount of force possible to allow him to safely arrest the suspect. That is what is seen in the video,” Voordenhout said.

She added that the woman was not injured and that she was arrested for possession of a weapon dangerous to the public.

Voordenhout said the events were captured on surveillance footage that bears out the officer’s account.

“Upon review of the incident, there are currently no grounds for an investigation by the EPS Professional Standards Branch,” she said.

In an interview prior to Edmonton police releasing its explanation for the use of force, Gale said she found the incident infuriating.

“For him to violently attack her like that was just unconscionable. And no human being should ever be subjected to that kind of violence, especially from the EPS,” Gale said in an interview Friday.

Gale said she knows the woman, and said that she is homeless.

The Bear Clan Patrol Beaver Hills House is the Edmonton chapter of a national organization that supports people who are homeless, distributing food, water and tents for people sleeping rough.

Experts disagree on use of force

University of Alberta criminology Prof. Temitope Oriola said he finds the use of force depicted in the video troubling.

“That use of force did not seem reasonable or necessary under the circumstance,” Oriola said.

He said while there are times when the use of force is warranted, it didn’t appear that the officer was imminent danger or that the level of violence was warranted given the woman’s comparatively small stature.

He said that a few extra minutes of verbal engagement with the woman would have helped, and that the rush to force shows a problem with the way officers are being trained.

Because violence has been threatened, letting the woman walk away wasn’t an option, King said.

He said the officer made a good choice by opting for physical force rather than deploying a Taser or pulling his gun on the woman in an attempt to stop her.

“I don’t see anything untoward in what the officer did,” King said.

King said that even if Edmonton police had forwarded the case to the Alberta Serious Incident Response Team, it’s unlikely the organization, which investigates serious incidents involving police in the province, would agree to take it on, adding that similar incidents happen on a “pretty regular basis.”