Wowplus
Home Communities Finance With no end in sight for the shutdown, thousands of federal workers... 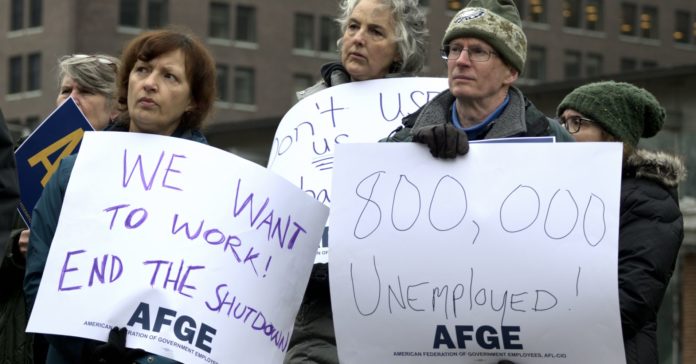 A few days ago, Will Kohler, a tax examiner for the IRS, filed for unemployment. He’s been out of work for three weeks now due to the gridlock in Washington, D.C.

“It seems like it’s going to go on forever,” Kohler, 55, said, from his house in Covington, Kentucky. “I need to eat.”

He has $500 left until his first unemployment check arrives.

Some 800,000 federal workers across the country find themselves in financial uncertainty as the government shutdown drags into its third week. President Donald Trump has said the stalemate could persist for “months or even years.”

As a result, unemployment offices are reporting an uptick in claims from federal workers. Among the applicants: a scientist at the Environmental Protection Agency, a judge for the Department of Housing and Urban Development and a data analyst at the Department of Transportation.

More than 4,700 federal employees filed for unemployment in the last week of December, compared with 929 the week prior, according to the Department of Labor. There is no federal data available yet for the first week of January. Unemployment rules vary by state; generally the government provides benefits to eligible workers who have lost a job “through no fault of their own,” for a maximum of 26 weeks.

In New York, more than 900 furloughed federal workers have applied for the benefit. In the first week of January, 114 federal employees in Alabama filed for unemployment, compared with just 16 the previous week.

“It makes a lot of sense with all the uncertainty people are facing,” said Michele Evermore, a senior policy analyst at the National Employment Law Project.

Essential workers typically are not eligible for the benefit because they’re still showing up to a job, although furloughed workers likely will qualify. Many of the 4 million government contractors who have seen their paychecks come to a halt are eligible, as well.

Andrew Leyder, 27, a data analyst on contract at the Department of Transportation in Washington, D.C., applied for unemployment in the second week of the shutdown and has already been approved.

“I didn’t think it could have come down to this,” he said. “Though unemployment insurance won’t cover all of my expenses, the weekly payout is better than nothing.”

Without unemployment, Leyder said, he would have to move back home with his family in Michigan. “I have co-workers who are maxing out their credit cards in order to survive these past few weeks,” he said.

He’s looking for another job in case the shutdown doesn’t end soon, though he’s not too optimistic that he’ll be able to find one. “Being in D.C. where the majority of us work for the government, it’s very hard to find another job when everyone is also trying to find a new job,” he said.

Some states have a waiting period before workers qualify for unemployment and the application process can take weeks. Government workers might hit another roadblock: no one is at their office to verify their lack of employment.

Gabrielle Roesch is currently waiting to receive her first unemployment check. In the meantime, the post-doctorate fellow at the Department of Agriculture has postponed her bills and stopped saving with her husband for retirement. “I’m really concerned about digging into the little savings we do have,” Roesch, 37, said.

To keep receiving her unemployment benefit in Oregon, she must prove that she’s looking for work, including making contact with at least two other organizations each week. “It’s very odd because I have a full-time job that’s really important to me,” she said.

Federal workers will have to pay back any money they receive under the program if Congress passes legislation to compensate them for the period the government was closed.

Whitney Brown, a curator at the Smithsonian Institution, applied for unemployment a few days ago. She worries about making her mortgage payment and other bills, without falling deeper into credit card debt.

“People say, ‘Go get a job, delivering pizza,'” Brown, 35, said. “It’s not that simple. I’m accountable to this job in Washington.”