Windows at Cambridge, Ont., pharmacy and bistro smashed by rocks with anti-vaccination message 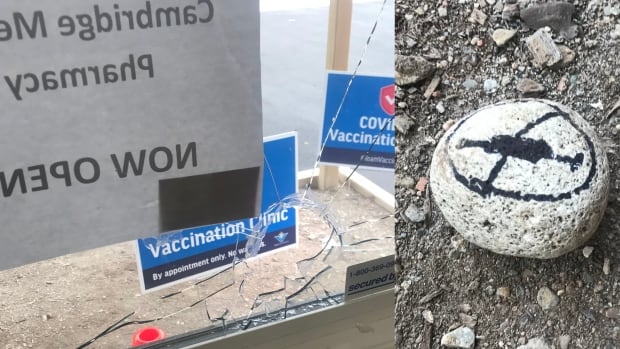 Police are investigating after two businesses in Cambridge, Ont., reported having rocks with anti-vaccination messaging on them thrown at and through their windows.

Zaz Bistro reported on its Facebook page that someone threw rocks through the plate glass window at 1:05 a.m. ET Wednesday.

“We are very saddened and shaken by this vandalism! Zaz Bistro does not write nor influence the rules, we just do our best to remain open,” a Facebook post said. “As a small business, it’s been a tough year. Following mandated provincial rules is the only way we can stay open.”

Cambridge Medical Pharmacy also had a post on Facebook showing similar rocks that had been thrown through its window. The two businesses are approximately 350 metres apart on King Street East in the Preston area of Cambridge.

“This is very disrespectful toward the health care workers, doctors and nurses who work day and night to keep people healthy. This is so disappointing,” the pharmacy’s post said.

While the motive for the vandalism is unknown, it does come after the province introduced measures where people would need to provide proof of vaccinations in some venues, such as for indoor dining, meeting spaces, theatres and cinemas.

‘A little bit of a scary feeling’

Pharmacist and owner Nimmit Vyas told CBC Kitchener-Waterloo no one was in the business when the rock was thrown through the window. He noticed the window was broken when he went to open the blinds to the pharmacy’s front window Wednesday morning.

After reviewing video surveillance footage, he said it appeared two rocks were thrown at 11:41 p.m. Tuesday night by a person on a bicycle.

A smaller rock, the size of about a golf ball, looked to have bounced off the window, but a larger rock about the size of a fist broke through and got stuck in the blinds, he said.

“After looking at the video, I went outside and I looked for the rock that fell on the ground and I found a rock with a syringe drawn with a cross across it and on the other side of the rock it said ‘eff you commies,'” he said, noting the F-word was spelled out.

Vyas said people may be upset with rules by the province, such as requiring proof of vaccination in some situations, but the vandalism has him feeling frustrated.

“All you’re trying to do is help the community and vaccinate people as much as we can, and I understand people’s frustration that they might not be too happy with the government’s decision but doing property damage and vandalizing someone’s property is not something anyone should do to show their frustration,” he said.

“All this did was damage our property and waste a lot of people’s time, effort and money.”

Vyas says he won’t go through insurance to replace the window because it would increase the premiums for the business. The vandalism does have him nervous because sometimes he’s in the pharmacy after it’s closed at night.

“It’s a little bit of a scary feeling to know anyone can just walk in and harass the health-care professionals and cause damage,” he said.

In both instances, the rocks appeared to have a syringe drawn on with black marker and then a circle and line through the syringe.

The Waterloo Regional Police Service said in a news release it is aware of the vandalism.

“In both instances, the rocks had messages and graphics with possible inferences to anti-vaccination,” police said in the release.