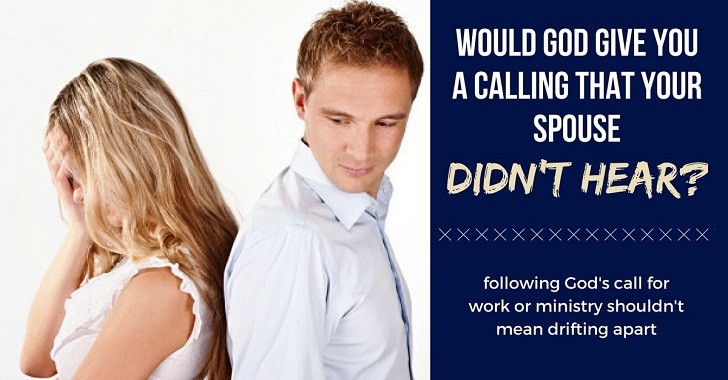 I don’t believe that God would call you to anything–a ministry, a job–that would cause you and your husband to live separate lives.

I have a lot on my heart this week. Last week I wrote what I think is likely the most important series I’ve ever done on this blog–more important even than my 29 days to great sex. I wrote about how the messages that the Christian church gives women concerning shame and blame for men’s sin so often seriously harm our views of sex, our marriages, and even our view of God. It’s really dangerous, and it needs to stop.

But while I’ve been intellectually fired up about that, on a personal level I’ve been thinking quietly about something else over the last few months.

Recently I watched the Anne Hathaway/Robert DeNiro movie The Intern (which is WONDERFUL, by the way), and one of the underlying plots is that Hathaway’s character has established a super successful online clothing company, and her husband has left his job to run the home and be a stay-at-home dad. But Hathaway is just so busy that their marriage is becoming increasingly distant. Was she right for starting this huge business?

It’s easy to watch that movie and feel like Anne Hathaway made all the wrong choices. But I watched it and thought that her husband did, because Keith and I have been in that same position, twice, with the roles reversed. And we always supported each other.

If God is obviously calling one of you to a job that’s going to require a ton of attention, then the other spouse better get 110% on board with that.

When our children were little, Keith was a super busy pediatrician trying to grow his practice. I decided to stay at home with the kids and look after his billing. There was no point in me being upset when Keith was on call one in two nights. That was part of his job at the time. And what I could do was make sure that when he was home, we had a good time. And I could make sure that things functioned so well at home that he didn’t have a lot of other things to worry about.

At the same time, as my own ministry has gotten so much bigger in the last few years, we realized that we couldn’t each be called to jobs that took so much of our energy. Something had to give. And in this case it was Keith’s job. He’s taken a much more flexible and part-time position, and he’s taken up a ton of the slack at home (though I still do the cooking because I love that!), so that we can still be a unit.

Being a unit trumps everything else.

It really does. And this is one of the HUGE things I tried to hammer home in my book 9 Thoughts That Can Change Your Marriage: if you don’t take care to stay a unit, you will drift a part. It’s not you’ll maybe drift, or you might drift. It’s YOU WILL.

One of the reasons Keith and I have always stayed so close, though, is because we always saw ourselves as a unit. We weren’t in competition with each other. Sometimes my dreams were on hold, and sometimes his were. But the one thing that I could never live with was both of us being super busy and growing apart when there was something we could do about it.

I’m not saying that it’s wrong to be a two income family, by the way. Not at all!

But there is a difference between working a 35-hour job and taking a job which consumes much more than 40 hours a week, where you also bring work home, where it saps your emotional and mental energy at home constantly, and where time off is really hard to get. Some jobs become your life. Others are just jobs. And I don’t think it’s possible for two people to each have life-consuming jobs and still stay a unit.

But I’ve been talking about jobs so far. That’s not the only problem.

Ministry can sap your life, too.

When my girls were teenagers I was super involved in one of the youth ministries at our church. It took every Sunday, a bunch of weekends a year, and a ton of emotional energy.

When the girls joined, it became a family activity by default. We didn’t have a lot of weekends together anyway, what with my speaking and Keith’s call schedule, so if the girls were going to be gone for something, we may as well become leaders and make it a family thing. And for eight years, it was one of the central things we did altogether.

I even kept knitting while I was coaching! (Keith was taking this picture, so he was there, too)

I was more involved than Keith, but he was there, and he knew all the politics that often frustrated me. So I could unburden on him when I was super frustrated.

Yet most adults who volunteered there volunteered without their spouses. And over the years I’ve seen a few marriages that have broken up–and one leader in particular leave a spouse to marry another leader in the ministry.

I’m not saying that if you’re involved in a ministry at church that your spouse automatically has to be involved with you.

God does not call us to a ministry that will cause us to grow distant from our spouse.

I’ve seen a lot of people super-involved with ministry get divorced over the last decade, though, and I see a trend. I see people who are in distant marriages, or at least only mildly satisfying ones, who are sad and a little bit bored. And so they throw themselves into something that gives them purpose and that gives them something to focus their energy on so they don’t have to be so focused on an unsatisfying marriage.

These people become the core of the church. They’re looked up to and believed to be really spiritually sound. And they often feel more righteous in the marriage because they, after all, and pursuing God’s kingdom.

And then when the divorce happens, it’s such a surprise to everyone. To the millennials who were in the youth program with my girls, watching the adults who were their leaders make horrible choices has been terribly disillusioning.

Now sometimes you could feel genuinely called to a much needed ministry, but your spouse doesn’t feel the same way, and you feel like they’re holding you back from something God really wants done.

And that could very well be the case. But here’s the cold, hard truth: If you go ahead with something which will take an inordinate amount of your time and energy, and your spouse isn’t on board, it will drive a stake into your marriage.

You know, I could have had a great job when I was younger, but I gave it up because the thing I wanted, more than anything else, was a close family. I did not want to be stressed out of my gourd because everyone was so busy. Keith could have had a great job now, but he gave it up, because he knew he needed us to stay close. He wasn’t super passionate about this youth program, but he threw himself into it because it was important to the girls and it was important to me, and he wanted us to be a family.

You simply can’t have a close family when everyone is giving 100% to something outside the family. You can’t.

If everyone is focusing on the outside, then there is no cohesiveness anymore.

So I just want to say to those of you who are like the husband in The Intern, seeing your spouse have an amazing opportunity and feeling like you’ve been left behind: Stop it. Suck it up. You’re a unit. Your spouse’s success can be your success. You will each share in this. Get involved! Learn all you can about whatever the business or ministry is. Be the biggest support and cheerleader. His/her success can be yours, too!

And I want to say to those of you who want to go full tilt into a business or ministry opportunity: if your spouse isn’t on board, your family will fall apart.

It just will. I’m not saying there necessarily will be a divorce. But you aren’t going to feel close anymore. You aren’t going to have that ready and easy camaraderie from just sharing and doing life together. There is going to be a distance.

I’ve given up a lot in my life for the sake of other people–my husband, my girls. And I honestly don’t regret it, and at the time it didn’t even really feel like a sacrifice. Because I knew what I wanted most–my family to stay close. And I couldn’t deal with the stress of trying to accomplish that while being pulled in so many different directions.

So if your spouse is obviously being pulled in a direction, then start walking in that direction, too!

Don’t turn around and start walking in the opposite direction because you feel like you’re called there.

How do you decide if the two seem so opposite, and you both feel equally passionate about the callings?

You pray. You wrestle. You cry. But you can’t be happy if you’re both going in two different directions, and I don’t believe that God would ever lead you like that. If you both love God, though, and you both run after Him, eventually it will become clear where God is taking you.

And He is taking you in the same direction–count on it.

Want to make sure you don’t drift apart?

Check out 9 Thoughts That Can Change Your Marriage! I tell more about the two periods in our life where we did start to drift, and what we did about it before any major problems occurred.

You can feel like a unit. But it doesn’t happen automatically!