Why Not Let Your Husband “Give You a Hand”? 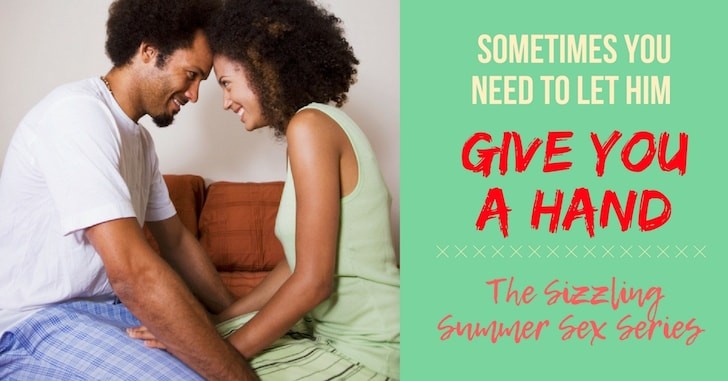 Why is it that so many women feel so guilty and awkward asking for their own sexual pleasure?

We’re in Day Two of our Sizzling Summer Sex Series! I know it’s July 4 today (Happy Independence Day to all my American readers!), and so likely a fair number of you are out with family barbecues and beach trips and generally having fun. So I’m going to save my big Top 10 post, that I normally post on Tuesday, for tomorrow when all are back.

But today I want to follow-up on what we were talking about yesterday: women’s sexual pleasure matters. And yet far too often we women feel very strange asking for what we need.

These first few days of the Sizzling Summer Sex Challenge are going to deal with this underlying roadblock many women have because they feel awkward asking for sexual pleasure themselves. If you’re not in this boat, that’s wonderful! And in a few days we’ll have some challenges that will have more relevance to you. But we need to get this right first!

When I wrote The Good Girl’s Guide to Great Sex, I surveyed thousands of women and asked them all about their sex lives (if you’re one of my long-time readers and you filled out that survey, thank you!). And what I found was that 36% women rarely or never reached orgasm. It just didn’t happen.

But I know that doesn’t always work.

So let’s go a little deeper today and explore what’s actually going on.

Why do women have such a hard time reaching orgasm with their husbands–even through manual or oral stimulation, which is usually easier?

To be completely frank, most women can bring themselves to climax through self-stimulation in under 5 minutes.

Yet if your husband tries to do the same thing, it often doesn’t happen–or at least it takes much longer.

It’s easy to blame this on him–“he’s just not touching me right!” And there is some logic in that. He doesn’t know how things feel, so he can’t adjust his touch accordingly the way you can.

But that’s not the only factor. I think the other problem is that it’s just plain awkward.

It’s far more vulnerable to have him bring you to orgasm with his fingers than it is to make love, because when he’s bringing you to orgasm, he’s able to watch you. He’s in control and you’re not. During intercourse, you’re both not in control. His focus is not just on you; it’s also on what he’s feeling. But when he’s just trying to stimulate you, you’re very vulnerable. It’s almost like you’re on display.

For women, asking husbands to help us reach climax is very awkward. And very vulnerable. Click To Tweet

This makes it a catch-22. For women to reach orgasm reliably during intercourse, we have to be much more attuned to how our bodies work, and so do our husbands. That’s hard to do without learning how to stimulate her to orgasm first, so that you start to learn how arousal works for her. But that kind of stimulation is far more vulnerable. So many women willingly opt for a climax-less intercourse time than for him to bring us to orgasm himself.

Especially when you’re just married and just getting used to sex, intercourse is actually easier (unless there’s pain involved). But the problem is that this likely won’t get you where you want to go.

Can The Good Girl’s Guide to Great Sex Help Me Reach Orgasm?

The Good Girl’s Guide to Great Sex is all about how to make sex great in each of the three areas of intimacy: spiritual, emotional, and physical. And so it explains step by step how to make sex feel awesome for you, along with some great tips on reach the Big O.

If you’ve ever wondered what all the fuss is about–check out The Good Girl’s Guide to Great Sex!

A few years ago a friend wrote a post for this blog that she called “Honeymoon Blues to “O”ver the Rainbow“. She and her husband totally loved each other, but they just could not get THERE. And she asked some advice, and an older woman told her, “don’t stop until you get there.”

Read the whole story about her first orgasm here–it’s so real and kind of funny.

Let me add–Don’t stop getting there

“Don’t stop until you get there” is great advice for trying to reach your first orgasm with your husband.

Some of the best advice for reaching climax: Don’t stop until you get there!Click To Tweet

But I’m going to add one more little bit: don’t stop getting there. Don’t let orgasm become something rare in your marriage, that you only reach every now and then. The more that you learn how your body works, the easier it will be to reach orgasm. The closer and more vulnerable you will feel with your husband (and vulnerability is a good thing, by the way!). And the better intercourse will work, too.

So often when he’s trying to satisfy you and nothing is happening we can start feeling guilty or anxious.

“Is he bored? Is he wondering why this is taking so long? Would he rather just stop? Why am I making him do this when it’s not having much of an effect?”

But your sexual pleasure matters, too. And the more you can reach orgasm through stimulation, the easier it will be to reach orgasm during intercourse. You can get to the point where he arouses you so you’re just on the edge–and then you can start intercourse. But that won’t happen until you both learn your body’s cues.

So instead of that self-defeating talk, try this:

My husband wants to give me pleasure. This is going to feel amazing. I was created to feel this!

And now, one more thing I want you to do. And it’s pretty big:

If he’s had difficulty bringing you to orgasm, or you just don’t insist on one very often, then it’s time to be more vulnerable!

Tonight, show him how you want to be touched. Let him watch, or else hold his fingers and use his fingers on yourself so he sees what feels good. Teach him how to do make you feel amazing!

Even if you feel awkward, just try it! And join us for the rest of July for more Sizzling Summer Sex challenges!