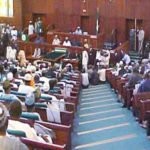 As a society, we can’t pass laws and say these laws should not be obeyed. It is very clear these resolutions as passed must be acted upon by the Acting President —Saraki

Senate should be ready to bear the consequences of bringing government to a halt, should it make good its threat to suspend confirmation of appointments…             —Sagay

I think what the Senate resolved to do by going on strike, as it were, is undemocratic and tantamount to arm-twisting the executive.
—Ngige

what appeared to be the resumption of the face-off between the Executive and the Legislature took place in the Senate yesterday.

It drew a line in the sand,  resolving to suspend confirmation of nominees until issues relating to the power of the Senate to confirm executive nominees as contained in the constitution are resolved.

The Senate insisted that its resolutions, especially the rejection of nominees, must be adhered to by the Acting President.

Those, whose nominations were rejected, the lawmakers said, must be relieved of their duties.

The lawmakers wondered why the EFCC Acting Chairman whose nomination was turned down was still being haboured by the Executive.

The Senate also resolved to ask Osinbajo to withdraw a statement credited to him that the Senate lacked the powers to confirm nominees.

The resolutions came after over one hour closed session where the lawmakers were said to have discussed the issues that formed the thrust of the decisions.

The lawmakers warned of dire consequences should the resolutions be ignored by the Executive.

The EFCC is investigating some senators for alleged corruption.

Senate President Bukola Saraki had read a letter of request for the confirmation of the appointment of Mr. Lanre Gbajabiamila as Director General, National Lottery Regulatory Commission, sent to the Senate by Osinbajo.

Hardly had Saraki concluded reading the four-paragraph letter dated 12 June, 2017 when Senator Ahmed Sani Yerima moved a point of order that the Acting President’s position on confirmation of nominees should be discussed.

Senator Yerima’s Point of Order opened a floodgate of attacks on the Executive as senators took turns to speak on the relationship between the two arms of government.

Saraki, who summed up the contributions of apparently angry senators, alluded to this when he insisted that the resolutions must be complied with.

Saraki said: “Distinguished colleagues, let me thank Senator Yerima for coming under Privileges. I think this matter is a very important matter but I think we need to address it once and for all and put it behind us.

“Because as a society, we can’t pass laws and say these laws should not be obeyed. It is very clear these resolutions as passed must be acted upon by the Acting President.

“And ensure that we continue to respect our democracy, our laws and constitution. It is not for us to choose which laws we obey and which laws we don’t obey.

“That is not the way any civilised, modern society works. And we hope that the Acting President will take appropriate action in line with these resolutions.”

Yerima (Zamfara West), who raised Order 14 of the Senate Standing Rules (Privileges), noted that since the Acting President concluded that the Senate lacked the power to confirm nominees, there was no need to acknowledge any letter from the executive on confirmation of appointments.

He said: “I want to draw the attention of the Senate to a statement credited to the Acting President, Professor Yemi Osinbajo that the Senate does not have the power to confirm.

“I was surprised to see the Senate President read a letter from the same Acting President, who said the Senate does not have the power to confirm a nominee from the executive.

“I am raising this point of order to draw the attention of the Senate to this issue and urge that we suspend any further action on confirmation of any nominee until the issue is resolved.”

Senator George Sekibo (Rivers East) asked the Senate to take a firm position and reject any attempts to weaken the National Assembly.

Sekibo said: “A careful look at what is happening will tell Nigerians that they are trying to indirectly take over our responsibilities. The main function of the National Assembly is to make laws. The clearing of nominees from the President is one of the major functions of the Senate.

“All the various laws made to establish agencies of the Federal Government state that we will confirm nominations into such bodies. When an Acting President says that the Senate has no powers to confirm, I wonder if he is familiar with the provisions of the 1999 Constitution as amended.

“The moment you are playing down on the constitution, then you are playing down on the integrity of the Nigerian people. If the Acting President said we do not have the powers to confirm and he is sending a name that we should confirm, then what do we do? Senate should place a suspension on nomination until we determine whether we have the powers to confirm or not.”

Senator Isa Hamma Misau (Bauchi North) lamented what he described as “the hypocrisy of the executive”.

Misau wondered why “the National Assembly should always be blackmailed by the executive to do their bidding”.

He said: “This is a double standard or an act of hypocrisy. It is like they do not want this National Assembly to function properly. Sometimes, we associate corruption with only financial misappropriation. But there is also corruption in the area of appointments. When you appoint your friend into an office, it is corruption. We are here to serve the people.

Senator Samuel Anyanwu (Imo East) said: “We must situate this issue. I am surprised that we still accept nominations in this chamber. We agreed that we will not take nominations again from the executive until certain things are resolved. We must take a stand. The leadership does not do anything about this issue within 48 hours, we will move against the leadership.”

Melaye, who is fighting for his political life because of the attempt by some of his constituents to recall him, said that the Senate should stand up to the Executive and its antics.

He said: “There is a call on senators to serve Nigerians. It is time for us to tell the executive to stop playing blues and dance reggae. The executive must stop approbating and reprobating powers to itself.  In this same chamber, we invited the Acting EFCC chairman. We invited him for a job interview and he failed. We rejected him.

“As I speak, Magu is still parading himself as EFCC chairman. Now, the same executive is sending a name for us to confirm. We confirmed Resident Electoral Commissioners before we went on break. They have sworn in some people and have refused to do same for others. This Senate leadership must act and take a position.

“It is time for the Senate to apply force. I am moving a motion that it becomes abominable for the Senate President to read another confirmation letter until the integrity of this Senate is respected by the executive.”

Senate Chief Whip Olusola Adeyeye (Osun Central) insisted that it was incumbent on the executive to obey the provisions of the constitution.

Adeyeye warned against attempts by the executive to destroy the Senate and insisted that anybody who is uncomfortable with any law should go to court to challenge it.

He said: “These are frightening times. This is because many Nigerians, including many of us here, put our lives on the line to ensure that we have democratic governance in Nigeria.

“We need to remind the republic that the difference between the military and a democratic regime is the existence of the legislature.

“Every public servant is bound to obey every law of the republic. Nobody, not the President, vice or the Senate President has the right to disobey our laws. Whoever has problems with our laws should go to court and declare them null and void. Until that is done, every law must be respected.

“I voted yes for Magu. But the Senate of the Federal Republic of Nigeria voted no. I stand with the Nigerian Senate. I choose a strong institution. We should not allow our institutions to be weakened. I want to lend the whole of my being to the first realm of the estate, which is the legislature. I pray that we assert the independence of the legislature and not as a sign of power mongering, but to show that this is not the government of strong individuals.”

Ekweremadu who cited different sections of the constitution, said Section 171 relied upon by the Executive to retain Magu talked about personal staff of Mr. President.

He noted that the issue under discussion had nothing to do with Magu or the DG National Lottery Commission but has a lot to do with what the Constitution said.

Ekweremadu said: “Let me make it clear that this has nothing to do with the Director-General of Lottery Commission or Ibrahim Magu, but about our constitution. One of the features of the Senate is the power of confirmation. The framers of the constitution gave the power to the Senate.

“If the law says that an appointee requires confirmation, we must obey what the law says. The executive must follow the provisions of the constitution.”

Senator Enyinnaya Abaribe (Abia South) caused a stir when he spoke of a vaccum in the Presidency.

Abaribe  drew the attention of the Senate to what he tagged a vacuum, following the two-day absence of the Acting President.

Osinbajo travelled to Ethiopia on Sunday for an African Union (AU) meeting. He returned yesterday.

Abaribe’s comment threw the chamber into confusion as some Senators agreed with him; others attempted to shout him down.

He persisted until Senator Kabiru Marafa moved a Point of Order to stop him.

For over 10 minutes, the Chamber was rowdy.  Senators lined up on political affiliation.

There was a loud roar in the chamber as some Senators shouted “you are correct”.

Saraki ruled Abaribe out of Order.

“The issue we are discussing has nothing to do with what Abaribe raised. We may have to discuss that at another day if need be. I have to rule you out of order Abaribe,” Saraki said.

He called Melaye, who reeled out the resolutions adopted by the upper chamber.

Media and Publicity Committee Chairman Aliyu Sabi Abdullahi told a news conference that the import of the resolutions was that rule of law should be supreme at all times.

Sen. Abdullahi said that the Executive must do what “needs to be done at all times”.

“We are asking the Acting President to respect the resolutions of the Senate. The Senate rejected Magu and Magu is still acting as EFCC chairman,” he said.