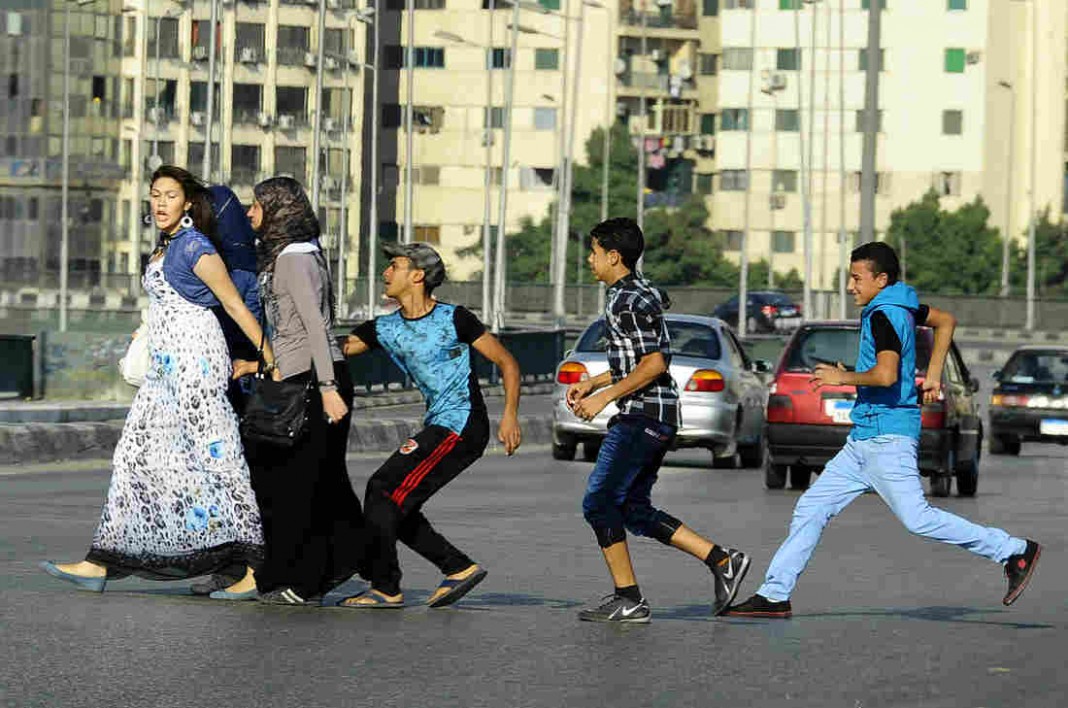 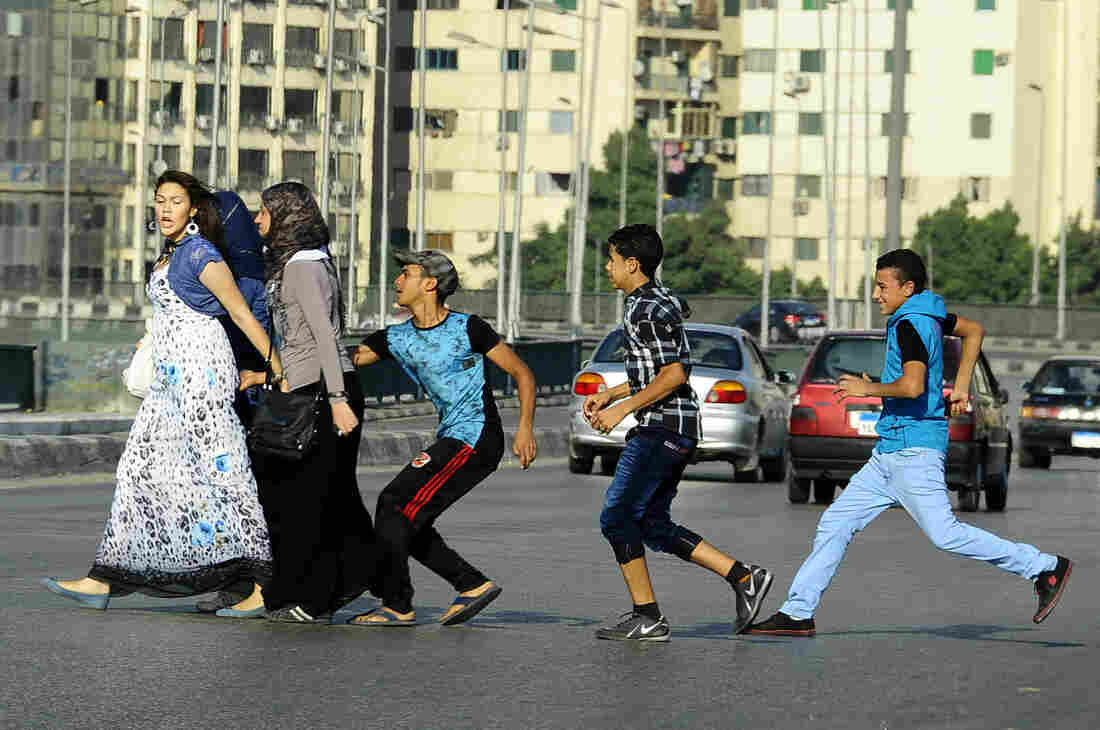 An Egyptian youth, trailed by his friends, gropes a woman as she crosses a Cairo street. Ahmed Abd El Latif/AP hide caption

An Egyptian youth, trailed by his friends, gropes a woman as she crosses a Cairo street.

Esraa Yousria Saleh was walking down El Hussein, a busy street in downtown Cairo famous for its souvenirs and tchotchkes, when a man in his early 20s made eye contact with her. He followed her, circled her, then suddenly — she felt a hot breath in her ear:

Saleh, 28, a feminist and activist based in Egypt, was furious. Why did that man feel like he could look at her? Follow her? Say those lewd words to her?

A May study from Promundo, an international research group, and U.N. Women sheds fresh light on men’s motivations for harassing women on the street in four countries in the Middle East: Egypt, Lebanon, Morocco and the Palestinian territories.

“We know quite a lot about women and girls but nothing about men and boys” when it comes to harassment, says Shereen El Feki, co-author of the report and the author of Sex and the Citadel: Intimate Life in a Changing Arab World.

The report found that, of the 4,830 men surveyed, between 31 percent in Lebanon to 64 percent in Egypt admitted to having sexually harassed women and girls in public, from ogling to stalking to rape.

Of course, street harassment is a global phenomenon. Studies have shown that vast majorities of women across cities in Brazil, India, Thailand and the U.K. have been subjected to harassment or violence in public. And the U.S. isn’t immune — 65 percent of 2,000 women surveyed said they had experienced street harassment, according to a 2014 study conducted by the research firm GfK for Stop Street Harassment, an advocacy group.

But there are a couple of things that stand out about street harassment in the Middle Eastern countries, according to the Promundo report. In the Palestinian territories, Morocco and Egypt, young men with secondary-level education were more likely to sexually harass women than their older, less-educated peers.

The researchers were surprised by the findings. Generally, men who have finished high school or college hold more enlightened attitudes toward women than those who have had no primary school or schooling at all, says Barker, who has studied men and gender equality in over 20 countries around the world.

Barker and El Feki suspect that factors contributing to the behavior include the region’s high unemployment rates, political instability and pressure to supply their family’s daily needs. Around half the men they surveyed, for example, said they felt stressed, depressed or ashamed to face their families. Perhaps harassing women is a way to assert their power, suggests Barker.

These young men “have high aspirations for themselves and aren’t able to meet them,” he says. “So they [harass women] to put them in their place. They feel like the world owes them.”

In a place like rural Egypt, the situation is easy to understand, says El Feki. “It speaks to the mind-numbing tedium of being a young man [there],” she says. They can’t find work. They can’t afford to marry. They’re stuck living with their parents. There’s nothing to do. “They’re in a suspended state of adolescence.”

The harassment is also a way for young men to “get their kicks,” says El Feki. When the men in the survey were asked why they sexually harassed women in public, the vast majority, up to 90 percent in some countries, said they did it for fun and excitement.

Holly Kearl, executive director for Stop Street Harassment and author of Stop Global Street Harassment: Growing Activism Around the World, says she’s not surprised. “I’ve seen that reasoning before in other studies: ‘I’m bored. I’m bonding with my male friends, we’re just having fun,’ ” she says. “Men aren’t thinking about how women are feeling.”

The researchers at Promundo suspect that men’s motivations behind the behavior is not unique to the Middle East. “We know that street harassment is an issue around the world and there are likely similar dynamics at play,” says Brian Heilman, a fellow at Promundo who helped write the report. “We just happen to have a rich glimpse of what it looks like in region through this data set.” This report is the first time that the group has studied street harassment from the male point of view in depth.

Women can experience a wide range of psychological effects from street harassment, says Kearl. Studies have shown that for women who are survivors of sexual violence, harassment can be triggering and traumatic. It also can make women feel unsafe, and as a result, they restrict their own movement.

Saleh, for example, has stopped riding the metro in downtown Cairo. She’s started to use Uber to get around for fear of another El Hussein incident. “But sometimes I run out of money so I’m forced to use [public transportation],” she says.

Groups across the Middle East, like HarassMap in Egypt and HarassTracker in Lebanon, are using crowdsourced data to map and report harassment incidents to keep streets safe. And in 2010, the U.N. launched Safe Cities and Safe Public Spaces, a global program to prevent street harassment in more than 20 cities around the world through education and intervention.

“Unfortunately, we don’t know what works long term,” says Kearl. “It’s hard to see which efforts are working at a large-scale level.” She suggests outreach to schools to talk about harassment in a co-ed environment.

Perhaps boys and men could then understand that their “fun” has consequences: “It’s as if there’s a hand reaching into my stomach and grabbing my intestines,” says Saleh. “Like I want to vomit but I can’t.”