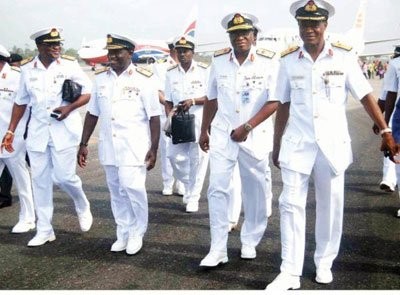 In line with the Chief of Naval Staff,  Vice Adm. Ibok-Ette Ibas, effort to reposition the Nigerian Navy, 21 senior officers were redeployed on Thursday to head different formations and commands.

The Director, Naval Information, Capt. Suleiman Dahun, Spain in a statement in Lagos, said that the posting was to re-organise the upper echelon of the Nigerian Navy.

Also affected in the reshufflement is Rear Adm. A. Osinowo, formerly Chief of Training and Operations, Naval Headquarters, who is now the Commandant, National Defence College.

He added that Rear Adm. BEE Ibe-Enwo, formerly FOC Logistics Command, would resume at Naval Headquarters as Chief of Naval Standards and Safety.