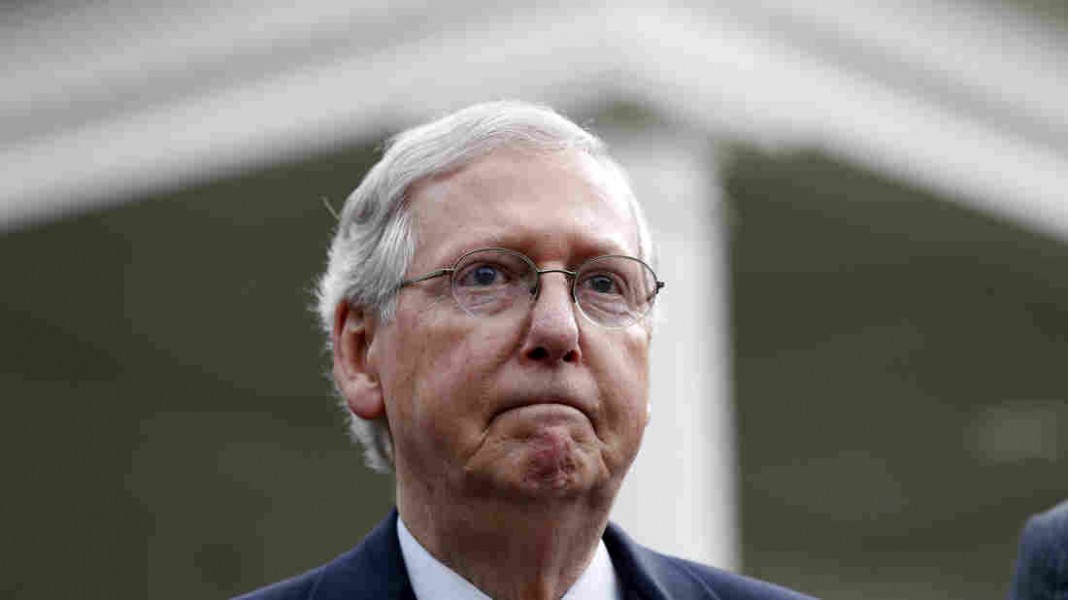 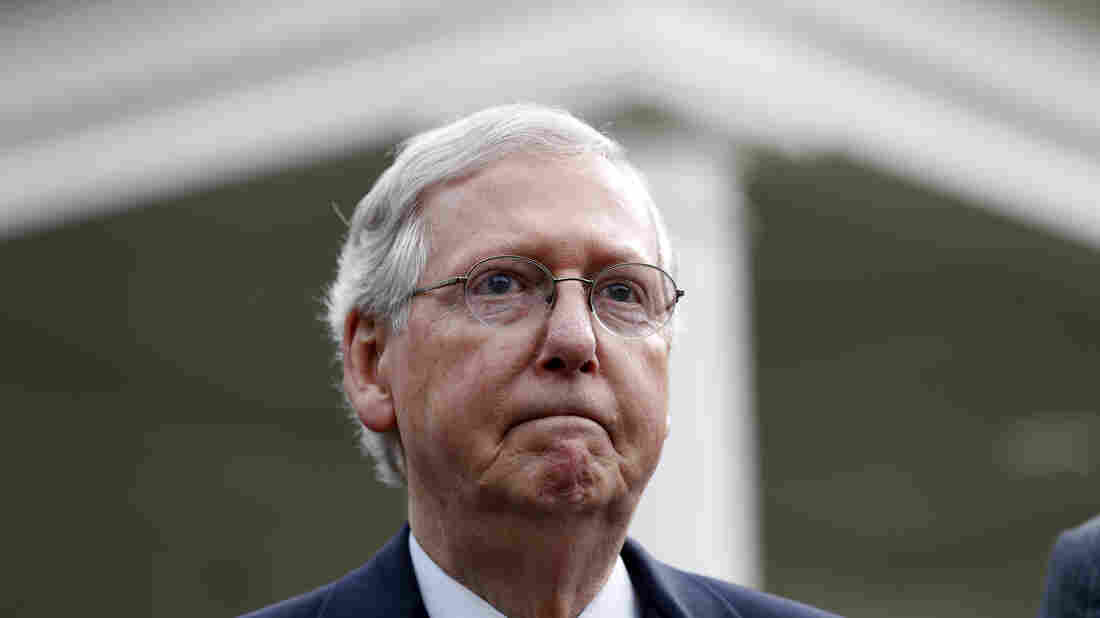 Senate Majority Leader Mitch McConnell of Kentucky faces a tough choice — irritate the GOP base and work with Democrats or risk passing not much meaningful legislation. Alex Brandon/AP hide caption

Senate Majority Leader Mitch McConnell of Kentucky faces a tough choice — irritate the GOP base and work with Democrats or risk passing not much meaningful legislation.

The defeat of the GOP Senate health care bill is major blow to all Republicans involved.

President Trump, whose approval rating stands lower than any recent president this early in his term, is now staring at an agenda imperiled. Despite his boasts, he has achieved little of significance through Congress. That failure is compounded by the fact that his party controls both chambers.

Republican Senate leader Mitch McConnell, hailed for all of his senatorial maneuverability, does not appear so enviable Tuesday morning. He showed he could gum up the system and manipulate the rules to deny a president of a different party, but he has not showed the ability to control his caucus in order to govern — the way past great Senate leaders have.

The goal, after all, of any truly great legislator has always been to see a problem and come up with constructive solutions to them for the country. Instead, the GOP continues to have growing pains overcoming its image as the “Party of No” in the Obama years. Unfortunately for them, now they’re saying no to themselves.

It raises a host of questions about the status of the Republican Party, which is led in the White House by a right-wing nationalist who exploited a culture seething at Washington and in Congress by those very Washington establishmentarians. Who is in control?

The conservatives from within, though, are not necessarily aligned with Trump. In fact, they have shown they are not afraid of either Trump or McConnell. That could mean big problems ahead for what Republicans can get done. Tax reform is a priority for McConnell and Trump, and Trump would also like to do infrastructure.

But there’s a reason a tax overhaul hasn’t happened in 30 years. And infrastructure went nowhere in the Obama years – despite a massive economic collapse and a willingness on both sides to do it. It failed because they couldn’t agree on how to pay for it.

This health care bill failure makes it all the more difficult — not just for momentum, and that’s no small thing, but also because of the hundreds of millions (originally $1 trillion) in tax cuts the health care bill would have provided. That would have been a big head start on tax cuts.

McConnell had already delayed the bill’s vote after Arizona Sen. John McCain was hospitalized after a serious surgery to remove a blood clot in his head. Now, with the loss of support from two more senators — conservatives Mike Lee of Utah and Jerry Moran of Kansas Monday night — the bill is effectively dead.

President Trump had plenty of advice, advocating full repeal, then build another plan. He even declared that Democrats would jump on board.

Republicans should just REPEAL failing ObamaCare now & work on a new Healthcare Plan that will start from a clean slate. Dems will join in!

McConnell put out his own statement and seemed to agree. He wants senators to vote to put the House health care bill on the floor and allow a vote to repeal major pieces of Obamacare.

“Regretfully, it is now apparent that the effort to repeal and immediately replace the failure of Obamacare will not be successful,” McConnell said. “So, in the coming days, the Senate will vote to take up the House bill with the first amendment in order being what a majority of the Senate has already supported in 2015 and that was vetoed by then-President Obama: a repeal of Obamacare with a two-year delay to provide for a stable transition period to a patient-centered health care system that gives Americans access to quality, affordable care.”

There are obvious fissures about how to proceed. And they won’t be easy to overcome.

The episode raises questions about the Republican brand. After Democrat Jimmy Carter left office, the GOP branded itself the party of management, the small-government alternative to what it lampooned as a Democratic Party that believed in bloated government.

It’s what helped Newt Gingrich’s rise to power as speaker with his Contract for America and the 1994 Republican Revolution. That sweeping election gave Republicans control of the House for the first time since the 1950s.

Since the 1994 takeover, Democrats have controlled the House in just two sessions of Congress, from 2007 to 2011. That’s when the Iraq war was raging and the economy collapsed under a Republican president and then in the first two years of a historic presidency.

On the heels of outrage over the Affordable Care Act, the Tea Party wave pushed Republicans back into power. And the GOP is fundamentally changed. This is not the same Republican Party that relented power a decade ago.

Factionalization, led by ideologues, prevented deals from being struck between Speaker John Boehner and Democratic President Barack Obama while the GOP was in the minority. It led to the downfall of Boehner, was never able to control his rowdy conference, flush with hard-line newbies.

Back in May 2012, six months before President Obama would be reelected, Boehner famously said, “It’s hard to keep 218 frogs in a wheelbarrow long enough to get a bill passed.”

Speaker Ryan has also faced the same problems in the early months of the Trump presidency. His hard-right faction initially prevented the passage of the House health care bill. That led Ryan to declare that “Obamacare is the law of the land.”

Boehner had more to say after his “frogs in a wheelbarrow” line. He added, “I want to do more, too. But Republicans are still a minority here in Washington. Democrats control the Senate, we’ve got a Democrat in the White House, and our members are pretty frustrated.”

That reason has now expired. Republicans are now in the majority. And yet they are still running into the same problems. The inability of leaders in both parties to broker deals and work constructively across party lines has meant the general public is looking at a Congress legislating in the same-old, same-partisan ways.

Some prominent Republican senators want the caucus to try and legitimately work with Democrats. McConnell attempted to use that very threat – working with Democrats — as a cudgel to get conservatives to vote for it. Apparently, that was a bluff, as he intends to see how far he can push governing along party lines.

But to what end, especially since there aren’t much more than two options when it comes to overhauling health care – government-run single payer or a market-based hybrid system similar to the Affordable Care Act?

And Republicans are the ones who came up with the market-based system as an alternative to “HillaryCare,” the health care plan Hillary Clinton was working on as first lady in the 1990s.

Afraid of upsetting their base, though, Republicans have refused to work with Democrats on health care in any serious way.

And they don’t look ready to do so any time soon, especially with “Obama” still in the law’s name.