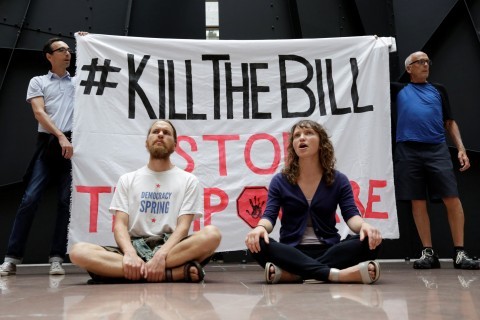 The Senate GOP’s push for the Better Care Reconciliation Act was on hold this week, with Sen. John McCain (R-Ariz.) unable to travel back to work after surgery. But the many progressive groups seeking to stop the bill are plowing ahead, canceling none of the sit-ins or rallies they organized when the BCRA was scheduled for a quick vote. They had watched the House fumble its repeal bill, then celebrated, only to watch the House pass a new version and send it to the Senate. The lesson: Never stop protesting.

“The lessons of the House vote are seared into activists’ minds,” said Ben Wikler, the Washington director for MoveOn.org. “If you take your eye off the ball for one minute, the moderates will cave, and the Republicans will slam a hard-right bill through before the public has a chance to mobilize. The only response is constant mobilization until they give up.”

Monday’s protests, which led to the arrests of 33 people, were relatively small but part of a large, multilevel campaign. The protests inside Senate offices were organized by UltraViolet, the Working Families Party and Our Revolution, a group started by Sen. Bernie Sanders (I-Vt.); a “People’s Filibuster” facing the Capitol from across Constitution Avenue was put on by MoveOn, Planned Parenthood, and the American Federation of State County and Municipal Employees.

“It’s the people against [Senate Majority Leader] Mitch McConnell and big money!” Sen. Ron Wyden (D-Ore.) said to about 100 protesters, some of them seeking shade in the punishing heat. “We won round one, where everybody counted us out. They know that we are organized, and we are going to organize every single day.”

The alliance between elected Democrats and protest groups, fragile just a few months ago, has strengthened even as protests have become more disruptive. In Georgia’s special House election, Republican groups spent millions of dollars linking the Democratic candidate to “the resistance,” with images of Women’s March protesters seeping into footage of anarchists smashing windows.

No windows were broken in Monday’s protests, but according to Capitol Police, the 33 protesters were arrested at six locations and charged with crowding, obstructing or incommoding. One man was charged with resisting arrest, according to Eva Malecki, a police spokeswoman.

Protesters went in expecting that response. Several had been arrested before, in state and District sit-ins designed to put the spotlight on Republicans who had not yet decided whether to support the BCRA. They started with a sit-in and singalong in Hart; Madea Benjamin, the Code Pink founder who has been arrested at many antiwar demonstrations, arrived in a borrowed doctor’s coat. Members of the news media had arrived, too; with no progress on the proposed legislation, protesters were filling a gap in the news cycle.

“We’re ready to fight. Health care is a human right,” protesters chanted as people watched the spectacle from balconies above the atrium.

Five people were arrested there after an officer asked them to leave and a few of them sat down and refused. The rest were stopped in the offices of key senators, chanting “kill the bill” and “they try to stop us, but we keep coming back.”

Megan Anderson, a 39-year-old Ohio resident who has a form of muscular dystrophy and uses a wheelchair, was arrested Monday after she would not leave Sen. Rob Portman’s office.

“I do not want to live in a nursing home,” Anderson said. “This is a death sentence.”

She and a handful of other protesters sat in the Ohio Republican’s office chanting, telling their stories and talking to legislative aides who said they would pass their messages to the senator.

“When the people rise up, the powers come down,” chanted Anderson and the other protesters. “Senator Portman, grow a spine; your job is on the line.”

Similar scenes played out in the offices of many other senators, including Patrick J. Toomey (R-Pa.), Lisa Murkowski (R-Alaska) and McConnell. More are expected to play out as the week goes on, regardless of whether the bill remained stalled.

“We’re not only fighting this health-care bill; we’re pushing for Medicare for all,” said Erika Andiola, an organizer with Our Revolution. “It’s a life-and-death situation. It’s a little bit ironic that this bill is delayed because a senator is being taken care of. Millions of other Americans want that care.”

No one was arrested at the People’s Filibuster, which alternated between speeches from Democratic senators and personal stories of people who had gotten health insurance through Obamacare. Democrats encouraged them to keep it up — and they would, with another protest planned for Tuesday.

“Look, I’ve been a mayor — I’ve been protested in every imaginable way,” Sen. Cory Booker (D-N.J.) said in an interview after his Filibuster speech. “People should obey the law, they should never get violent, but it’s going to get disruptive and difficult, as we saw with the tea party eight years ago. We ran for elected office — we signed up for this.”