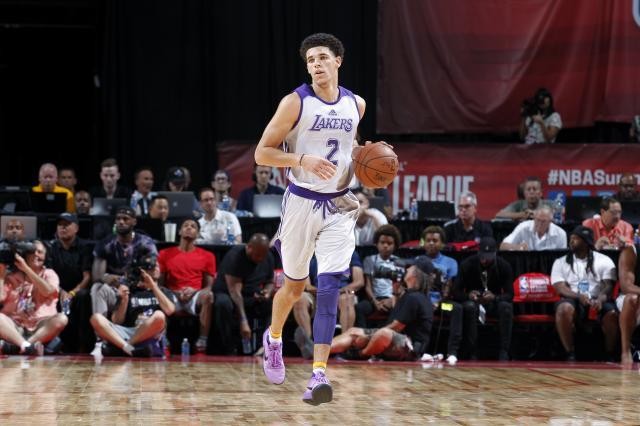 Kyle Kuzma put a stamp on his stellar 2017 Vegas Summer League tenure with a 30-point effort as the No. 15-seeded Los Angeles Lakers defeated the No. 16-seeded Portland Trail Blazers 110-98 in the Las Vegas Summer League Championship Game on Monday night at Thomas and Mack Center.

Kuzma averaged 25.0 points in the quarterfinal and semifinal rounds to help the Lakers (6-2) get to the title contest, and fittingly, it was his game-high scoring total that propelled Los Angeles to victory Monday and netted Kuzma the Summer League Championship Game MVP trophy.

The Lakers, playing without overall Las Vegas Summer League MVP Lonzo Ball (calf), drained 61.5 percent of their 65 shot attempts overall and saw six players reach double digits in the scoring column. On the defensive end, they limited the Trail Blazers (5-3) to a 43.7 percent success rate from the field also managed to win the rebounding battle by a 38-34 margin. The game was tightly contested throughout until the Lakers managed to create some space in the fourth quarter, as there were 12 ties and 15 lead changes overall. Los Angeles’ red-hot shooting did plenty to mask their ball security issues, as they committed a total of 19 turnovers.

Kuzma compiled his aforementioned scoring haul with an 11-for-16 tally from the field, including 6 of 10 from long distance, and he added 10 rebounds, one assist, one steal and one block. Matt Thomas contributed 23 points, two assists and one rebound. Vander Blue provided 20 points, six assists and five rebounds. Alex Caruso poured in 15 points to go with nine assists, seven rebounds, a steal and a block. Ivica Zubac had a near double-double of 12 points, nine rebounds and a block. Travis Wear led the bench with 10 points, five rebounds, three assists and two blocks.