What should the Oakland A’s ask for in a Sonny Gray trade? 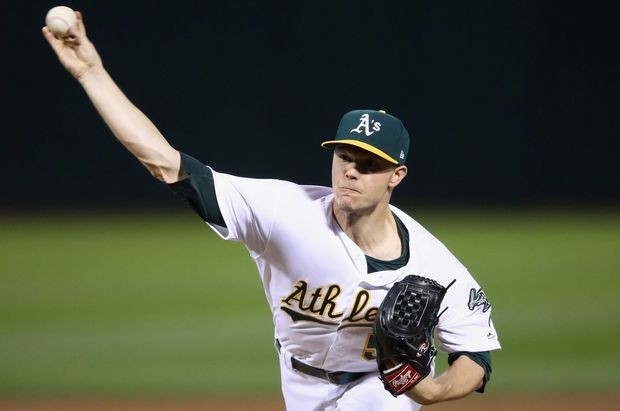 As A’s fans in the 21st century, we know that most young, potentially expensive, homegrown good things will come to an end.

We invariably will face this reality in the early summer every year.

The moment we’ve reluctantly been waiting for is finally here: the Sonny Gray trade rumors are flying.

Let’s get caught up.

Why on EARTH are we talking about trading our ace?!

Gray will be arbitration eligible next year, and a free agent in 2020. It’s no secret that he’s been more of an on-again, off-again ace than a total one. If you need a refresher, from 2013-2015, he was one of the top pitchers in the game: he was striking out 21 percent of batters, his ground ball rate was 54 percent, and his ERA- was 76- (ninth in the Majors for that time).

Come 2016, he was bad, but not as bad as his numbers might indicate; as you may recall, the A’s’ defense was atrocious. Sonny’s ERA- shot up to 141, he gave up homers twice as often as the previous year, but still the baby-faced assassin was there some nights. 53 weeks ago today we went 7.2 innings and gave up two runs on five hits; this wasn’t a case of the yips — the OG Sonny was in there somewhere.

Gray made his 2017 debut a month late thanks to a lat strain sustained early in the Spring, at that first start was ominous. He’s since recovered nicely. In the four starts following that debut, he gave up a total of seven earned runs. A rocky seven earned run start followed those, but he’s made three consecutive quality starts since then. Minus that rocky debut, Sonny’s GB% is back up to 54.3 percent, and he’s given up only two homers in those eight starts.

Long story short, buyers — including the rumored Astros — should be willing to send a bounty in return for 2.5 years of high-upside pitching, which would fuel the Youth Movement for years to come.

What is a realistic bounty?

Buster Olney recently said that Gray could be the #1 trade target in all of baseball, which means big return for the A’s.

In terms of needs, the A’s are looking for top outfield prospects. If you take a look at MLB.com’s ranking of the top 30 prospects in the system, only four of them are outfielders. Of those four, two are Matt Olson and Jaycob Brugman who we’ve seen, one is 18-year old Lazaro Armenteros who could be great when he matures, and the other is Sky Bolt who is still toiling in high-A.

Let’s take a look at what other pitchers have drawn in similar situations:

Drew Pomeranz — In the deal that sent our old friend from San Diego to Boston in July of 2016, the Red Sox sent top prospect Anderson Espinoza in exchange. They did this despite Pomeranz having only put up 1⁄2 an All-Star season following a couple of solidly mediocre years with the A’s. At the time of the trade, he had 2.5 years left his contract as Sonny does now. Espinoza is one of the top prospects in baseball (10th going into this year according to Fangraphs), and drew comparisons to Pedro Martinez when he signed out of Cuba in 2014. If Pomeranz can draw Espinoza, Gray should get a lot more.

Johnny Cueto — Gray is no Cueto (yet), but both have had fabulous seasons and pretty darn bad seasons. Before Cueto got a massive amount of money to pitch for the Giants, he was traded from the Reds to the Royals as they pursued their World Championship. He was a rental for the Royals, which lowered his return to an extent. Nonetheless, Cueto had dazzled the prior four years, but had some ups and downs to start 2015. Obviously Cueto was a star, but again, he was only a rental who was unlikely to re-sign with the team.

In return, the Royals sent pitchers Brandon Finnegan, John Lamb, and Cody Reed to the Reds: long term resources for win-now help. Finnegan was a top prospect in the Royals’ system, Reed was a high second-round pick in 2013, and Lamb was a high fifth-round pick back in 2008 who pitched alright in the beginning of 2015 but seems to have otherwise been thrown in the deal for kicks. Gray, with two years left on his contract, could draw something comparable to what Cueto did as a rental.

Jake Peavy — Though Peavy’s career began 12 years before he was traded to the Giants in 2014, his career FIP- going into 2014 was about 84, with a WAR of 3.4. Gray’s current FIP- stands at 91 with a WAR of 2.25. He’s not quite at Peavy’s level, but he’s not that far off considering Peavy’s robust career that included his share of rocky years.

In exchange for Peavy, the Giants sent Edwin Escobar and Heath Hembree. When he was sent to Boston, Escobar was the #2 prospect in the Giants’ system and was supposed to be able to contribute to the Sox’s rotation immediately if necessary. Hembree was the #9 prospect for the Giants, and was once called the “Closer of the Future” by Baseball America; not to mention, he had about five more years under club control. Peavy’s return is a good indicator of what Gray could draw, but keep in mind Sonny will be half a decade younger than Peavy was.

In exchange for Gray, the A’s should get more than a single top prospect, certainly something to the right of the value of Peavy’s two top players, and possibly right around Cueto’s return if the other team can be convinced that 2015 Sonny is here to stay.

The Astros Rumor, AKA Sonny Becomes the Enemy

As early as January of this year, the idea of Sonny going to the Astros surfaced. The ‘Stros have 3 of 5 starters on the DL including Dallas Keuchel, and today, Nick Cafardo at the Boston Globe reaffirmed that that there’s mutual interest between the teams in getting a deal done. However, the one thing standing in the way here is the rarity of intra-division trades: if this move is made, the A’s front office would effectively be saying that they don’t expect to compete with the Astros for the next couple seasons.

In terms of return for Gray, the Astros’ system is studded with outfielders.

They’re unlikely to part with #2 prospect Kyle Tucker, but the A’s could at least throw his name into a preliminary conversation to test the waters.

Luckily the Astros have got Ramon Laureano at #5. Originally drafted in the 16th round, Laureano had a breakout 2016 campaign that made the case for his quick rise to the Majors. He’s a scrappy, speedy guy that’s known to be aggressive and ambitious — sounds like a quintessential A.

Ranked at #8, the Astros have 24-year-old Teoscar Hernandez. After making some tweaks to his approach following a disappointing 2015, Hernandez tore up AA, got promoted to AAA, and after batting .313 in 38 games, and got a shot in the Bigs. He wasn’t great but did post an above-average .190 ISO in 112 appearances. He started 2017 back in AAA. He’s fared decently so far with a .360 OBP and seven homers in 45 games.

Daz Cameron — a former 1-1 consideration in his underclassman years — is ranked as the Astros’ #10 prospect. After having to make some tweaks in 2016, he’s poised for a comeback this year. Scouts are fairly confident he can make the changes and have a career as an everyday centerfielder. Many top prospects have to make adjustments at some point in their career (usually late in AAA or early on in the Majors), so it’s actually a positive that he’s getting that out of the way now.

Other options include Derek Fischer and Ronnie Dawson.

The A’s should settle for nothing less than Laureano as the headliner (but might as well make an attempt at Tucker), and a deal like Laureano plus Hernandez and Dawson or Cameron is what they should hold out for.

If the offer excludes one of the top guys in Tucker, Laureano, or Fischer, that might be fair based on his downsides, but the A’s don’t need to take it to boost a division rival — plenty of other teams need starting pitching help.

Only time will tell if Billy Beane and company will part with a fan-favorite homegrown hero only to face him multiple times per season, but if they choose to do so, the Astros have the talent to make it happen.