What does $48K in renos get you? For one woman, a home stripped bare 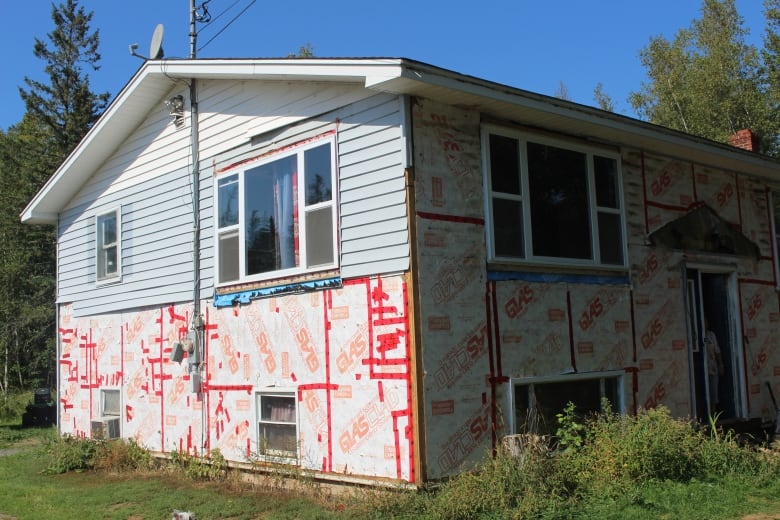 All Leanna Leger has to show for $48,000 in renovations is a house stripped bare.

Boards are visible through her torn-out ceiling, wires hang from beams and there are no walls to speak of in her kitchen or living room. The outside of the house in Meadow Brook, about 20 kilometres east of Moncton, looks just as dilapidated.

Leger hired contractors Mark Garland and Roger Leblanc to remodel the house, but instead of getting her dream home, she says, she was left with what looks like an abandoned construction site and little money to fix it. The contractors dispute her account of events and those of two other clients who successfully sued them in small claims court.

Now, as the temperature drops, Leger is living in the basement with her husband and her mother and their Chinese crested dogs. They’ve borrowed space heaters to try to stay warm.

“I try not to look,” Leger said as she surveyed the damage to her split-level house. “It’s a nightmare, it’s a living nightmare.”

A chance to rebuild

Last March, Leger received an insurance settlement for a car accident that happened five years ago and left her unable to work. The total payment was nearly $200,000 — a lot of money for Leger, who hoped to make it last.

Her plan: “Fix up my house, pay off my mortgage and hopefully get a car and just be able to have a little nest egg to survive off of. But the main thing was the home.”

In April, Leger perused Kijiji and contacted several contractors for estimates. Only one company — the Moncton duo of Garland and Leblanc — could do the work over the summer. Leger was unsure how to protect herself, but she asked for references. 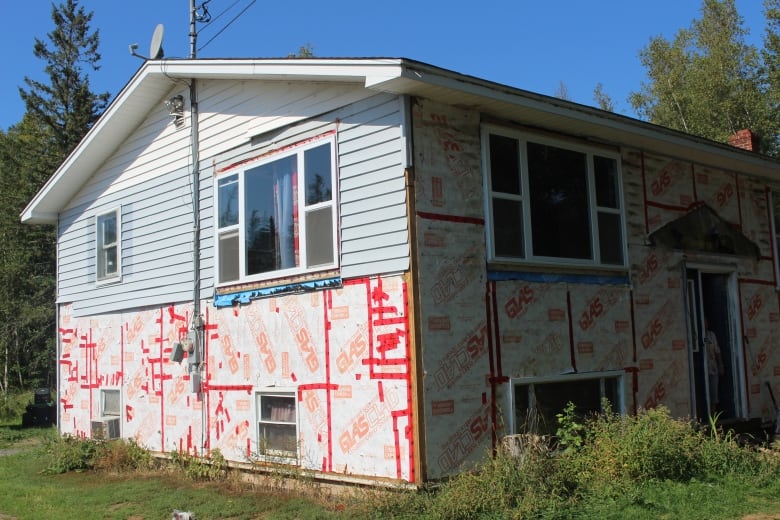 Garland says he and Leblanc did remove some siding from Leger’s house, the back deck and an interior wall before they stopped working when she told them to leave.

“We called them, they gave good references, said they were excellent, came in under budget, were always on time, did a wonderful job, yeah,” she said. “So I thought it was good.”

Garland and Leger signed a handwritten four-page contract on May 7.

Written on loose-leaf paper, it describes the renovations the two men agreed to carry out, including the addition of a second floor, with two new bedrooms and a new bathroom, a complete remodelling of the first floor, including new cupboards, countertops and flooring in the kitchen. Outside, there were to be new windows, a new roof, siding and a back deck.

But Leger’s elation at hiring a contractor soon started to drain.

Before starting work at the house, Garland and Leblanc made numerous requests for money to buy supplies.

If she acted fast, Garland told Leger, he could get a deal on a front door. He also told her he bought roof trusses, cabinets and windows, lumber, staples, joists, hinges and plywood.

Between June 4 and June 13, she gave $24,450 to Garland, and she said none of the bigger-ticket items showed up at her house.

When Garland and Leblanc finally started work at Leger’s house, on July 24, her fears did not subside. By then, she had handed over $48,000 to Garland and had nothing to show for it except $32,000 in receipts for supplies she hadn’t seen.

Even after a delivery truck showed up with supplies later that first day, Leger said, she noticed things disappearing from the site — “cement, house wrap, nails, anything small.”

As the days passed and some of the bigger items still didn’t appear, Leger’s suspicions grew.

It didn’t help, she said, that Garland and Leblanc spent only an hour or two at her house each day.

To  speed things up, her husband did some demolition work, including pulling out the ceiling and some interior walls, but this was at Garland’s suggestion, Leger said.

Things came to a head Aug. 1, when a second delivery truck showed up with supplies. Garland and Leblanc removed some things from the delivery truck and put them “straight into their truck,” Leger said.

She asked the men to put everything in her garage instead.

“That’s not the way we do things, Leanna, we keep it in our truck,” she recalled Garland telling her.

When she insisted, Garland got angry.

Half of these people that have problems with me want a champagne job done for a beer budget.– Mark Garland, contractor

“He kept the expensive stuff in his truck and left.”

Since then, Leger said, she has not seen Garland or Leblanc or the things she paid for.

Won’t work ‘under these conditions’ 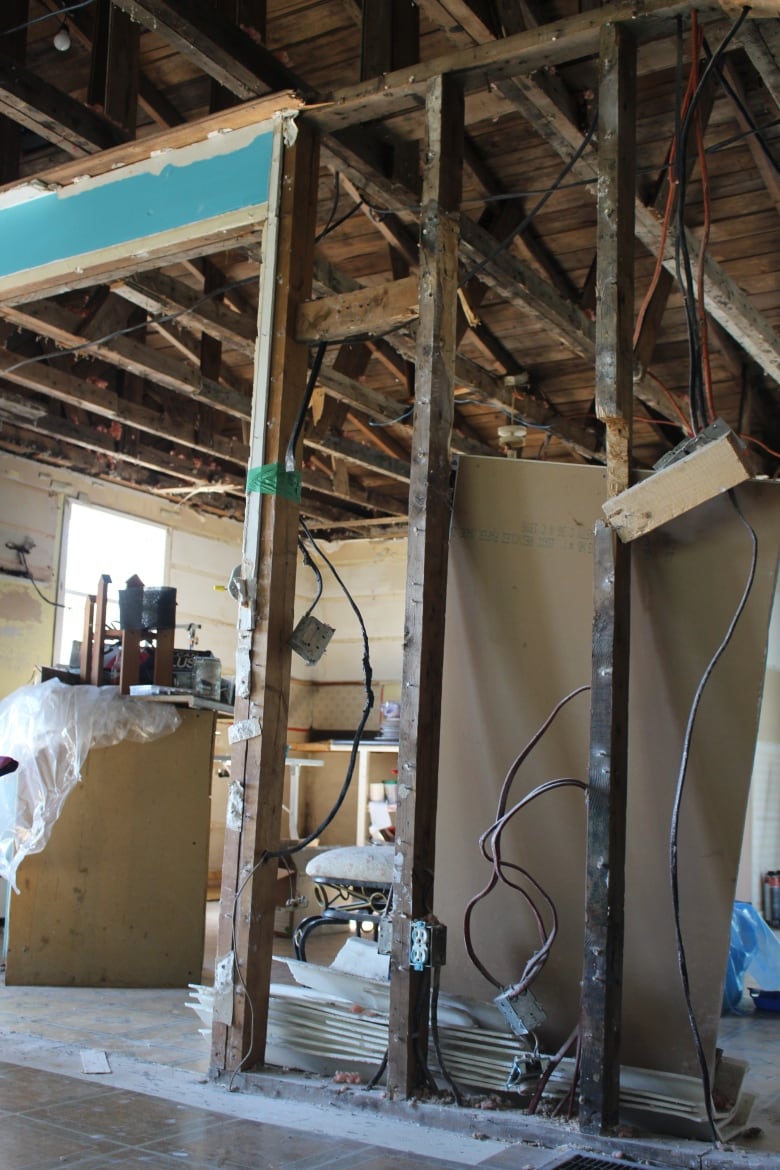 Leger’s Meadow Brook home is in a state of disrepair. She says Garland took supplies from her job site and stormed off when she asked him to return them. Garland said he didn’t steal anything. (Tori Weldon/CBC)

Reached by CBC News on the phone, Garland denied stealing anything from Leger and said she has everything she paid for.

He admitted he’d kept the cupboards at his home but said he returned them to the Meadow Brook site after he stopped working there.

He’s also put some things in his truck, but only because they had to be exchanged, he said.

“She changed the deck three friggin’ sizes,” Garland said. “They changed the sinks, the cupboards around, lighting fixtures — inside, everything was changed. We just we couldn’t keep up with it.”

On his last day, he said, Leger was checking every item against the purchase order.

“We don’t need to be babysat,” he said. “When it came down to it, I said, ‘Leanna, we’re not working under these conditions.'” 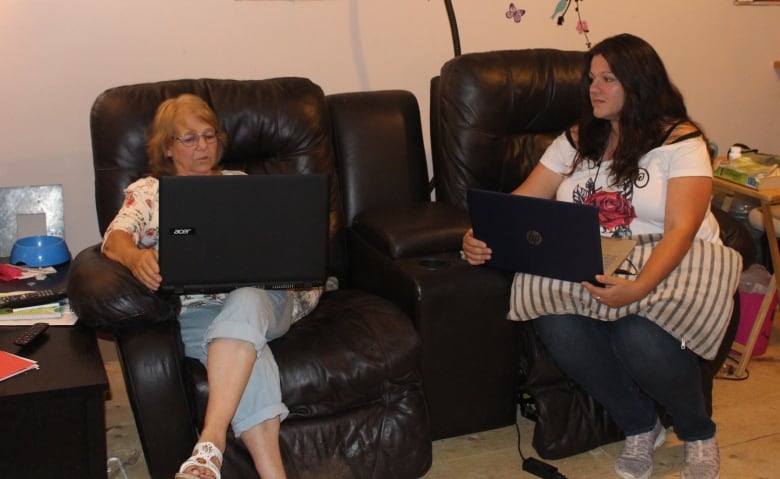 Leger, right, her mother and her husband have moved into the basement. They lug water up and down the stairs and eat on paper plates because the kitchen is gutted. (Tori Weldon/CBC)

Although the job wasn’t done, he said he kept Leger’s deposit because she told him to leave.

“That’s what a deposit is for … if you book our time and you cancel.”

He says the right thing until you cross him or you question him, and then he’s arguing and yelling and threatening. – Dena  Drysdale , former customer

Garland blamed Leger and her husband fo most of the damage at the house.

“All we did was take a wall inside, take a deck out back and strip the siding,” Garland said. “If that house is in bad shape, they tore it apart.”

He also said he never asked the couple to help with the demolition work.

“We did not want their help.”

According to court documents, Garland has been accused before of failing to keep up his end of a deal. There have been two small claims court orders against him since 2015.

Dena Drysdale, who filed a claim in April, said she hired Garland to build emergency exit stairs at her Moncton home and gave him a $600 deposit. Garland signed a contract for the work.

But Drysdale said he quickly ran into trouble getting a building permit and she twice had to take the application, filled out by Garland, to Moncton’s building inspection office. She said both times she was told the application was not filled out properly.

On the second attempt, she called Garland from the office and had an inspector speak with him.

Garland “was arguing with the person at the inspection office and I clearly saw that I’d made a mistake,” Drysdale said.

She told Garland she would hire someone else and asked for her deposit back. That’s when his demeanour changed. 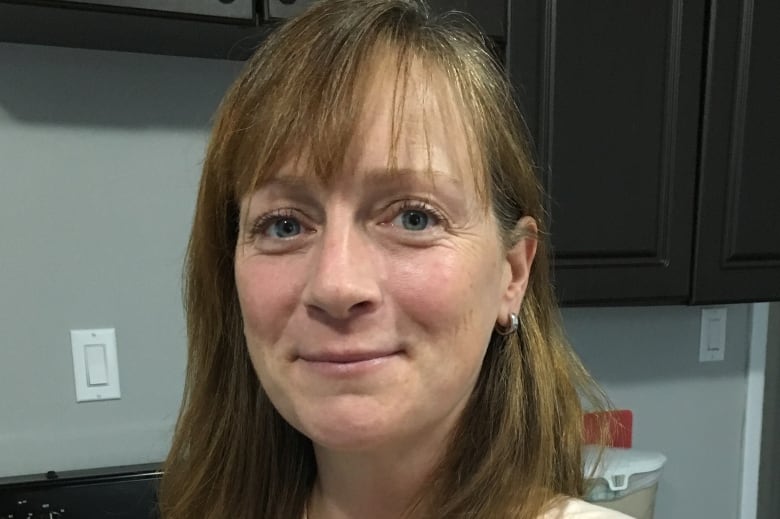 “He told me he was going to counter-sue me for the cost of the entire job,” Drysdale said. “He says the right thing until you cross him or you question him, and then he’s arguing and yelling and threatening.”

She filed her claim against Garland, alleging that he did not have the skills for the job. She was awarded $725.

In 2015, Robert Sakell of Riverview filed a small claim against Garland after a botched job on a shed. Garland signed a contract to repair the barn and shingle its roof and install some siding on Sakell’s house. Sakell said Garland cancelled a few times, eventually showing up when Sakell was out of town.

When Garland sent pictures of what looked like finished work, Sakell paid him the outstanding balance, only to discover after his return home that the work wasn’t finished or done properly.

Asked to clean up the mess, Garland became angry and threatening, Sakell said.

Sakell was awarded $1,250 in small claims court because of the unfinished work.

Garland didn’t respond to either of the small claims and has not paid the awards.

Drysdale and Sakell said they didn’t expect to get their money but felt small claims court was their only recourse.

Expected a lot on ‘beer budget’

Garland, meanwhile, said he was aware of the court orders but felt small claims court was not a good use of his time.

“Small claims, they tell you straight out, even if you win their suit, they’re not responsible to collect the money,” he said.

He also said that for these three unhappy customers, there are 400 happy ones, though he would not provide any names.

“I don’t want you guys hassling my customers,” he said. “Half of these people that have problems with me want a champagne job done for a beer budget.”

Leger, Sakell and Drysdale all said they spoke to the police about Garland. Sakell said he showed the RCMP what he considered to be threatening texts from Garland.

The RCMP said they can’t comment or confirm whether they are investigating any of the complaints.

Leger said a lawyer advised her that even if she succeeded with a legal action, she wouldn’t get her money back if Garland and Leblanc didn’t have assets.

Leger said a local hardware store has volunteered to help her with supplies, and she hasn’t figured out a next step as her money dwindles.

Through tears, she said she has accepted that she won’t recover her money but hopes some good can come of her ordeal.

“I know life isn’t fair, but this is really bad, you know. … I just don’t want anyone else to have to go through this.”