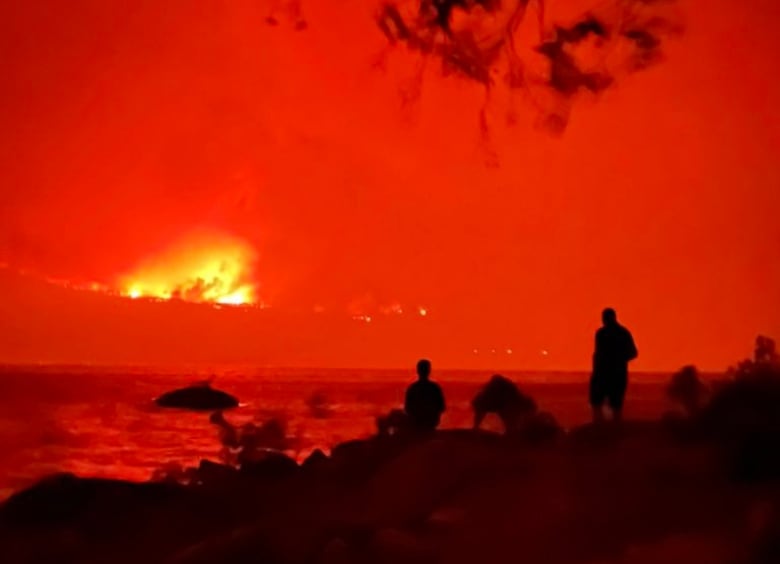 Light rain over the weekend provided a short reprieve for firefighters on the front lines of B.C.’s province-wide wildfires, but hot and dry conditions are expected to return Monday.

On Sunday, 279 wildfires were burning throughout the province, with 31 of them considered “of note” by the B.C. Wildfire Service.

Most of the fires are concentrated in the province’s Interior, specifically, in the area served by the Kamloops Fire Centre, including the White Rock Lake fire burning between Kamloops and Vernon, B.C.

The fire had earlier ripped through the community of Monte Lake, B.C., and caused ash to rain on the city of Vernon, B.C., on Saturday, but fire information officer Forrest Tower says that overnight rain had reduced the effects of smoke and soot.

“It looks like some of the fire got upwards of 2.5 millimetres of rain, which honestly isn’t a whole lot in the long term,” he said. “But in the short term, for the rest of today going into tomorrow, it’s quite diminished the fire behaviour for most of the fire.”

There is still fire activity on nearly all fronts of the White Rock Lake fire, according to Tower, with the blaze estimated to be nearly 550 square kilometres in size.

The rain on Saturday led the City of Vernon to rescind most of an evacuation alert that had been issued for the entire municipality the day before.

The City of Armstrong, B.C., also rescinded their citywide evacuation alert on Sunday, as did the City of Kamloops for the neighbourhoods of Campbell Creek, Dallas and Barnhartvale.

In 100 Mile House, Interior Health has begun to return care home residents to their community now that the Flat Lake wildfire evacuation alerts had been rescinded.

The health authority said over the coming days it would transport 124 residents who had been temporarily moved to Merritt, Kamloops, Salmon Arm and Williams Lake.

Also on Sunday, the Regional District of Okanagan-Similkameen downgraded an evacuation order to an evacuation alert for some homes in the NK’Mip Creek area.

Another heat wave on the way

The Wildfire Service, however, said hot and dry conditions will return to the province at the start of the week as yet another high-pressure ridge will build another heat wave.

“By the end of next week, it looks to be back to conditions where there’ll be some quite significant fire behaviour,” said Tower.

“[The heat wave] will bring some more stable conditions, but it will really continue to dry out those fuels,” said Briana Hill, another fire information officer with B.C. Wildfire Service.

“Looking even further ahead to when the ridge breaks down, [it will also bring] the potential for new ignitions.”

Meanwhile, the B.C. Wildfire Service put new restrictions in place for the Garrison Lake wildfire about 33 kilometres southwest of Princeton.

The 120-square-kilometre fire is classified as out of control, and there is now an area restriction order for the Garrison Lake area near Manning Park — a popular spot for outdoor recreation.

No one is allowed in the area unless travelling to their residence in an official capacity, or to participate in agriculture activities.

Across B.C., 6,902 properties are on evacuation order, with nearly 36,000 under evacuation alert.

Tower says residents of Monte Lake and other communities which suffered structural damage, like the Parker Cove area, may still have to wait before they can assess the damage to their properties.

“In terms of a timeline of when they can go back in, the answer is when it’s safe,” he said, noting that there was no way to accurately say when that would be at this point.

The overall damage is still unclear, but previously, one resident spoke of watching her home and the homes of her neighbours burn while fleeing.

While high winds have been a huge problem for firefighters thus far in B.C.’s wildfire season, the overnight rain and cooler conditions mean Sunday’s forecast is much more favourable.

“It’s still a little gusty. We expect winds gusting up to 20 km/h this afternoon,” said Hill. “However, we are expecting lighter winds which will be welcome.”

Approximately 6,377 square kilometres have been burned so far this year, with fires expected to last well into September.