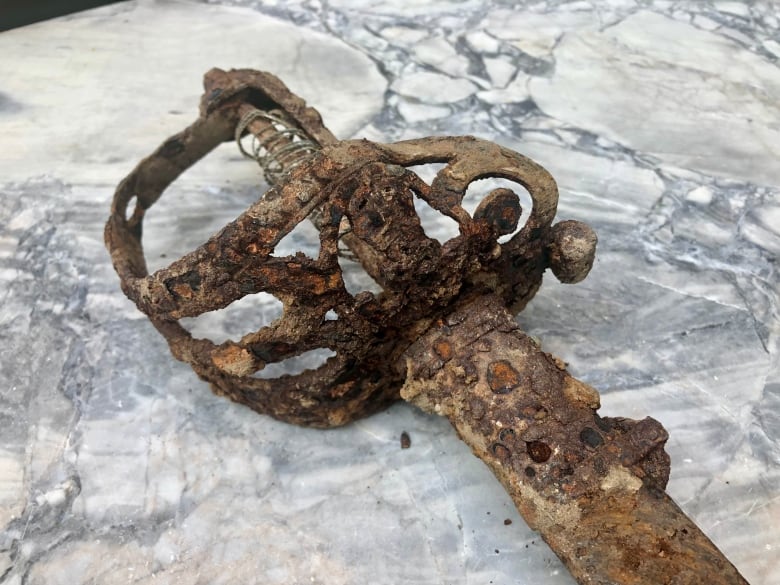 If you’ve ever undertaken a major home renovation, you know that an unscheduled midday call from your contractor rarely brings good news.

Often, it means they’ve discovered something unexpected and probably expensive.

For the Sigouin family of Ottawa, the unexpected discovery turned out to be priceless — at least to them.

In April 2020, contractors were digging in the backyard of the family’s home in Ottawa’s central Glebe neighbourhood while building a new patio. As the excavator prepared to backfill the soil, the workers noticed the unmistakable shape of a sword.

They quickly called Brad Sigouin to come take a look.

The weapon’s ornate hand guard was heavily corroded, and any leather that once bound the grip had long since fallen away, leaving a spiral of wire. The scabbard had rotted through in places, revealing glimpses of the steel blade underneath. It appeared so fragile that the Sigouins didn’t dare attempt to pull it off.

The sword looked as though it had been down there for a century, but it was more or less intact.

“The mud kind of preserved it,” Sigouin said.

The digging didn’t stop there. The Sigouins now had a mystery on their hands and soon began delving into the sword’s provenance.

Because it had already been unearthed when it was spotted, there was no way of knowing precisely how deep the sword was buried. Nor were any other objects found alongside it.

“There were no bones, there was nothing else,” Renee Sigouin said. “Thank goodness.”

With the aid of an archeologist friend and some online research, she initially determined the model to be a 19th-century British infantry sword used during the Crimean War, the Boer War and various colonial conflicts. It was also coveted by Confederate officers during the American Civil War in the 1860s.

But because of the COVID-19 pandemic, Renee Sigouin was unable to show the sword in person to local experts, slowing the search for confirmation.

Based on emailed photos, one expert at the Canadian Museum of History in Gatineau, Que., narrowed it down to a rifle regiment weapon with a straight thrusting blade introduced in the 1890s and used into the 20th century.

Eric Fernberg, a collections specialist with the Canadian War Museum, further pinpointed the sword’s age to post-1897, when certain telltale modifications were made to the hand guard.

Engravings on the hidden blade could help narrow down the sword’s age and even its original owner’s regiment — Fernberg believes it may have belonged to an officer with the 43rd Ottawa and Carleton Rifles, later the Cameron Highlanders of Ottawa — but confirming that would involve removing the scabbard, a risk Fernberg cautioned against taking.

“That thing is so fused together that you don’t know what’s going to happen,” he told CBC News.

None of that explains how the sword came to be buried in the Sigouins’ backyard, however.

Brad Sigouin thinks it might have been left behind by a British officer passing through what was then the undeveloped outskirts of the capital.

“Maybe somebody forgot it or it was lost or something like that,” he ventured.

But Fernberg said he isn’t so sure, especially since officers paid for their swords out of their own pockets.

“I can’t picture an officer losing it. I mean, these things [were] expensive,” he said.

Fernberg said he believes it’s more likely that the sword somehow ended up on the property after the house was built — a forgotten relic that sank into the soil with some decaying outbuilding, perhaps.

A search of the home’s previous occupants dating back to the first in 1914 provides a few possibilities, including two who worked for the Department of Militia and Defence in the early 20th century.

Then there was Andrew Imlach, who owned the home at 48 Powell Ave. from 1920 until his death in 1937. Imlach was president of Ottawa’s Victoria Foundry, but there’s evidence that as a young man he also served in a local militia unit.

When Imlach died, his funeral service was held at the home and was attended by many of Ottawa’s most prominent citizens. Could the sword have been buried as part of some funereal rite for a former military man?

CBC News reached out to living relatives of several previous owners of the property, but none who responded knew anything about the mystery.

The Sigouins know they may never have all the answers, but they do have the sword — and they intend to keep it.

An online search revealed that, despite their contractor’s initial reaction, such an artifact is worth “a few thousand dollars” at best, even in pristine condition, Renee Sigouin said. Most sell for far less.

“It doesn’t really have any value. It’s got more sentimental value, more significance to the house than it would as an object for sale,” she said.

With the gradual lifting of pandemic restrictions, the Sigouins are hoping to find a professional who can clean the object, though Fernberg said it’s likely too far gone for a complete restoration.

Eventually, the Sigouins plan to mount the sword behind glass, perhaps on some old boards that were also salvaged during the renovation, and display it in their home.

At the same time, they’re prepared for the faint possibility that someone could come forward and make a claim.

“It has meaning to us because it was found at the house as part of our whole experience with the renovation and everything, but obviously if it’s someone’s great-grandfather’s, I’m not going to say no, you can’t have that,” Renee Sigouin said.

“I’d be OK with that, as long as they could prove it,” Brad Sigouin agreed.