Village of Tatamagouche, N.S., rallies around homeless family to build them a house 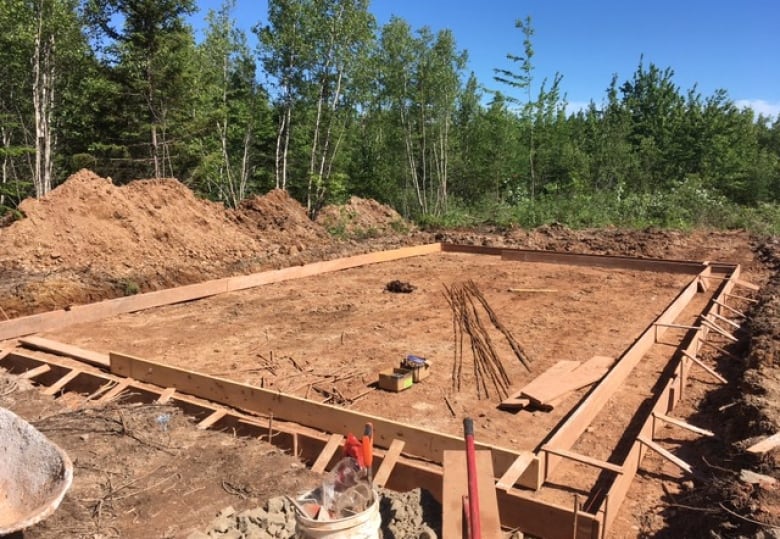 Residents of a village in Colchester County, N.S., have rallied around a family who became homeless earlier this year — with the goal of building them a house in a matter of weeks.

The entire experience has been both “overwhelming” and “uplifting,” said Elaine Heighton, the mother of four who was the recipient of the community outpouring that will allow her family to move out of tents and into their own home.

“It’s been amazing,” she said. “We’re absolutely grateful and will forever be grateful to all the people that are involved, regardless of the capacity that they’ve helped,” she said.

The resident of Tatamagouche, a village about 50 kilometres north of Truro, with a population of about 2,000, was forced to move out of her rental house along with her husband Quincy and their four children in May, after the owner sold it. Unable to find a home, they moved into a motel for the month of June and have been staying in tents on her mother’s property this month, while their home is being built.

“Tatamagouche is a really amazing community and the communities around it are always very supportive of people, of helping people, but I never would have anticipated something on such a large scale,” she said.

Heighton has lived in Tatamagouche for most of her life. Her family of six had been renting a home for three years, but in February, the owner sold it.

The family had been looking for new affordable housing ever since February, when the home they were renting was first sold, but with four children, two dogs and a cat, the search was proving difficult.

“We were kind of left scrambling for a suitable place,” Heighton said.

Without any housing, they moved into a motel for the month of June and during their stay, they decided to set up tents on Heighton’s mother’s property for the rest of summer.

“When that word got out in the community, the community just wouldn’t have it,” Jimmie LeFresne, a member of the local Odd Fellows, a group dedicated to personal and social development, told CBC Radio’s Information Morning Nova Scotia on Wednesday.

LeFresne said in the Tatamagouche area, there’s about a two-year wait on rental units and homes are selling as soon as they hit the market.

Heighton’s experience is just one example of the far-reaching housing crisis in Nova Scotia.

A recently completed study by Halifax-based Turner Drake Consulting, found there were 53 individuals in Colchester County in north central Nova Scotia who reported experiencing homelessness over a one-month period this spring. That’s a rate of one in 1,000 people, which is higher than Halifax Regional Municipality’s homelessness rate.

So when LeFresne heard about the Heightons’ situation, the Odd Fellows group and the community quickly came up with a plan.

“Well, let’s build a house. Let’s see how fast we can build a house and what we can do for this family to keep them in the community,” he said.

The family had already purchased a small piece of land as a last resort, so construction was able to begin at the end of June.

LeFresne said local business, contractors and volunteers offered supplies and labour to build the house. The community also set up a GoFundMe for the family that has raised $1,300 as of Friday.

The Tatamagouche Home Hardware also provided the Heightons with a payment plan so they can pay for materials as they can afford them.

LeFresne said the house is small, about 800 square feet. It will have four bedrooms, one bathroom, and a combined kitchen and living room.

“It’s very basic, but that’s what’s needed in this situation,” he said.

A month later, the house is almost finished. The family is still tenting but they expect to move into their new home in a few weeks.

“It definitely makes the rainy, muddy days in a tent much easier because we know that there is something really wonderful waiting for us,” Heighton said.

“There’s so many people that are stuck with not knowing where they’re going to go … so we’re really appreciative and fortunate that we know that we’re going to be OK,” she said.

“We’re going to have a safe, warm place to call our own.”