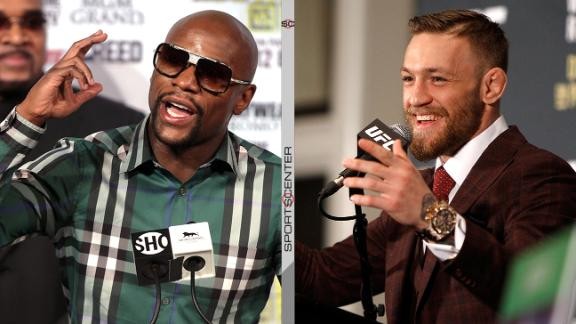 For a fight that may never take place, the potential blockbuster bout between Floyd Mayweather and Conor McGregor has already attracted thousands of dollars in bets at Las Vegas sportsbooks.

In mid-February, when hype about the fight intensified, the Westgate SuperBook made Mayweather a giant -2,500 favorite, with McGregor paying back +1,100.

The SuperBook has already taken more than $10,000 on the fight, which is by no means official. The book stipulates that the fight must be a boxing match and must take place by May 13, 2018, or all bets will be refunded.

“Most fights that are not official don’t garner much handle until officially becoming announced,” SuperBook assistant manager Jeff Sherman told ESPN in an email. “I’m not surprised by the McGregor support, just that it has come without an official fight announcement.”

“Will we see that fight? I strongly feel we won’t,” De La Hoya told CBS Sports.

The Westgate Las Vegas SuperBook already has booked more than $10,000 in bets on a potential boxing match between Floyd Mayweather and Conor McGregor. Ethan Miller/Getty Images

However, UFC president Dana White, during an April 9 appearance on “Conan,” said he thought the fight would happen.

It’s not unusual for the betting public, which prefers to bet a little with a chance to win a lot, to gravitate toward a high-return underdog.

“We haven’t taken a bet on the favorite,” said longtime Las Vegas oddsmaker Jimmy Vaccaro of the South Point, one the few sportsbooks to have odds up on the fight. “I’m rooting for it to happen. It’s an event, and I think it will happen.”