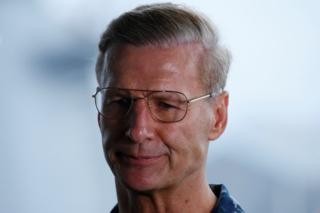 The US Navy has dismissed Vice Adm Joseph Aucoin as commander of the Seventh Fleet following a string of collisions involving warships in Asia.

Ten sailors are still missing after the USS John S McCain collided with an oil tanker near Singapore on Monday.

Navy officials say human remains have since been found in sealed compartments on board the ship, which is now in port in Singapore.

The crash was the fourth such incident in a year.

In a statement, the Navy said it had lost confidence in Vice Adm Aucoin’s ability to command.

The Seventh Fleet, based in Yokosuka, Japan, is the largest forward-­deployed fleet in the US Navy, with some 50 to 70 vessels and submarines.

Vice Adm Aucoin, who has been its commander since 2015, was due to retire within weeks. His designated successor will replace him immediately.

His removal is the latest in a series of steps taken by Navy officials after the USS John S McCain collision. It is not clear when a formal announcement will be made.

The incident triggered a rare worldwide “operational pause” of the US Navy’s fleets as well as a review of operations.

The USS John S McCain was east of Singapore when it collided with the oil tanker Alnic MC before dawn on Monday.

The collision left a large hole in the destroyer’s port side – the left-hand side of the vessel facing forward – and flooded compartments including crew berths. Five sailors were injured.

The destroyer is now at the Changi naval base in Singapore.

Ships, equipment and aircraft from the American, Indonesian, Malaysian and Singapore navies have been involved in the search for the 10 missing sailors.

On Tuesday, officials announced that human remains had been found in the sealed flooded compartments of the destroyer.

They are also verifying the identity of a body found at sea by the Malaysian navy.

The Alnic MC sustained damage to a tank near the front of the ship, but none of its crew were injured and there were no oil spills.

The incident marked the fourth time this year that a US Navy vessel has been involved in an accident in Asia.

Two months ago, seven US sailors were killed when the USS Fitzgerald collided with a container ship in Japanese waters near the port city of Yokosuka.

Those who died were found in flooded berths on board the ship after the collision caused a gash under the warship’s waterline.

The US Navy said last week that about a dozen sailors would be disciplined, and the commanding officer and other senior crew would be taken off the ship.

In May, a guided missile cruiser collided with a South Korean fishing vessel, while in January another cruiser ran aground near the 7th Fleet base in Yokosuka.