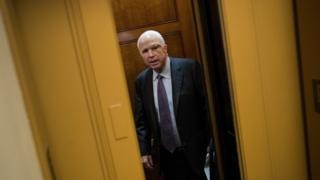 The latest attempt to repeal the Obama-era healthcare act has failed after a dramatic night in the US Senate.

At least three Republicans – John McCain, Susan Collins and Lisa Murkowski – voted against the bill, which needed a simple majority to pass.

President Donald Trump said the three had “let the American people down”.

The so-called “skinny” repeal, which would have scaled back some of the more controversial provisions, is the third failed attempt to repeal Obamacare.

It would have resulted in 16 million people losing their health insurance by 2026, with insurance premiums increasing by 20%, according to the Congressional Budget Office (CBO).

But it was voted down by 51 votes to 49 in the Republican-dominated Senate.

Democrat Chuck Schumer said his party was relieved that millions of people would retain their healthcare.

The vote had been delayed after Senate Republicans kept a procedural vote open before the actual Obamacare vote while they attempted to persuade their members to vote for the repeal.

The arc of history is long, but it bends towards revenge.

There were gasps when Mr McCain, after being furiously lobbied by Vice-President Mike Pence, joined two other Republican senators in voting against the so-called “skinny” repeal plan, considered the bare minimum Senate Republicans could agree on.

Instead of a big step toward becoming law – either in its skinny form or after further negotiations with the House of Representatives – the future of Obamacare repeal has been thrown into doubt.

The reality is, for now, there is no minimum level of change on which Senate Republicans can agree. They either have to work with Democrats or resign themselves to stalemate and move on to other topics, like taxes or infrastructure spending.

It will take some time for the enormity of this late-night Senate drama to sink in. No one really expected Mr McCain to be the decisive vote, but the man who once had a reputation as a Republican “maverick”, now facing a dire brain cancer diagnosis, had at least one more surprise in his pocket.

But Mr McCain then approached a group of Democrats, who appeared happy to see him.

After the vote, Mr McCain said that the skinny repeal did not amount to meaningful reform and would not have improved care for Americans.

He added that House Speaker Paul Ryan’s assurance that the House would be willing to send the bill for further consideration by committee “did not ease my concern that this shell of a bill could be taken up and passed at any time”.

But Mr McCain also criticised the way Obamacare had been passed by Democrats and called for senators to “return to the correct way of legislating” with input from both parties.

The Trump administration had also put pressure on Sen Murkowski, with President Trump tweeting criticism of her on Wednesday.

Ahead of Thursday’s late-night vote, Mr Trump had urged Republicans to “get there after waiting seven years” and “give America great healthcare”.

The “skinny” repeal plan – officially known as the Health Care Freedom Act – would have eliminated parts of Obamacare – the Affordable Care Act – including the individual mandate requiring all Americans to have health insurance coverage, as well as a tax on medical devices.

Earlier this week the Senate voted against a proposal to replace Obamacare and another proposal to partially repeal it.