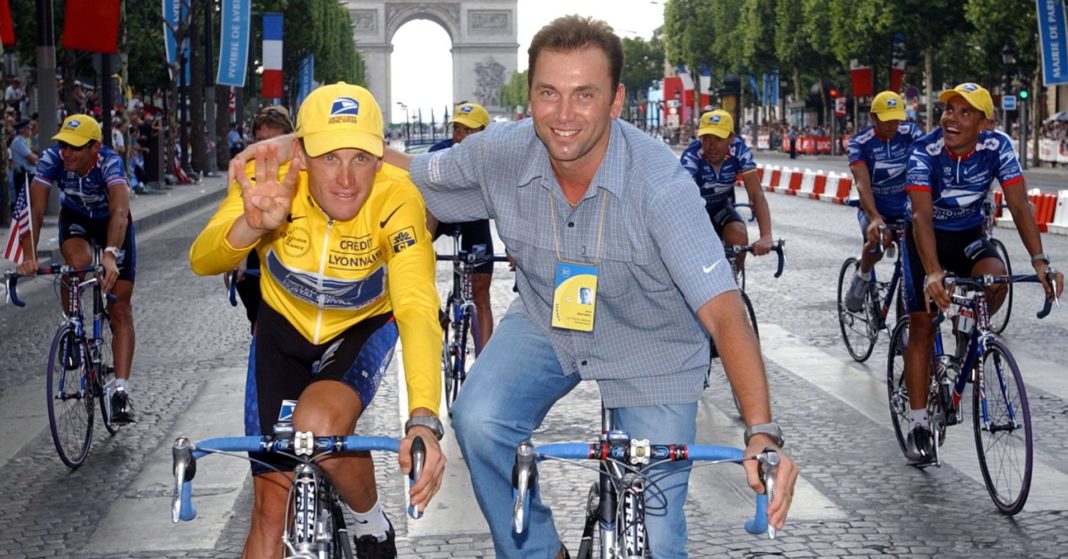 The U.S. government is seeking $1.2 million from Lance Armstrong’s former cycling team manager to wrap up a lawsuit that accused him and Armstrong of ripping off the U.S. Postal Service more than 14 years ago.

In court papers filed Monday, U.S. Justice Department attorneys asked a federal judge for a civil default judgment against Johan Bruyneel, who was at Armstrong’s side during all seven of his tarnished victories in the Tour de France.

The government says Bruyneel is personally liable for $1.2 million and could be on the hook for an additional $451,000, along with Tailwind Sports, the defunct company that owned their cycling team.

“Bruyneel was unjustly enriched by his fraud and is liable to the United States for the payments it made to him,” the government stated in the court filings Monday.

The U.S. government filed a civil lawsuit against Armstrong, Bruyneel and Tailwind Sports in 2013, alleging that they defrauded the Postal Service, the cycling team’s sponsor. Armstrong settled out of the case in April by agreeing to pay nearly $7 million.

The Postal Service paid $32.3 million to sponsor the team from 2000 to 2004 but said in the lawsuit that it never would have paid that if it had known the team was using banned drugs and blood transfusions to cheat in races.

Now the government is chasing a loose end with Bruyneel, who “directed and facilitated” the team’s illicit doping program, according to the filing.

But the larger question is whether the government will ever be able to get this money from him, even if a judge grants the government’s request. Bruyneel, a Belgian, appears to be betting that the U.S. government has no enforcement power over him in this case and won’t be able to collect on such a judgment against him overseas.

As an American citizen, Armstrong spent years fighting the case with his attorneys before deciding to end it with a payment.

By contrast, Bruyneel appeared to make a strategic decision to ignore the lawsuit starting in 2014, when he notified the court that he had instructed his attorneys in the case to withdraw as his representatives. He recently has lived in London and Madrid and appears to believe he’s essentially immune to a civil judgment handed down by an American court.

It is “unlikely that default judgment like this would be enforced overseas,” said Linda Silberman, a transnational law expert and law professor at New York University. Silberman told USA TODAY Sports that such judgments still present risks for those in other countries, including the possibility that their assets might come into the USA, “where enforcement is likely to be required.”

Bruyneel didn’t immediately return a message seeking comment. The government previously sought to recoup money for the Postal Service in triple – nearly $100 million – before reaching a settlement with Armstrong to end the case just weeks away from its scheduled trial in May.

The government said Bruyneel, an employee of Tailwind, received nearly $2 million from Tailwind between 1999 and 2004 in salary and bonuses. The Postal Service “paid 60% of Tailwind’s expenses, including the payments to Bruyneel. Accordingly, Bruyneel was unjustly enriched by his fraud and is liable to the United States for the payments it made to him through Tailwind, or $1,228,700,” the government filing states.

The government also seeks a separate default judgment against Bruyneel and the other remaining defendant in the case, Tailwind Sports, which dissolved in 2007. It is seeking an additional $451,000 in that request for violations of the False Claims Act – $11,000 in penalties for each of the 41 claims Tailwind submitted for payment from the Postal Service from 2000 to 2004.

“Because Bruyneel and Tailwind defaulted, the well-pleaded allegations in the complaint are deemed admitted by them,” the government stated.

A judgment against Tailwind also only might be symbolic because it no longer exists. In 2016, a clerk for the U.S. District Court in Washington, D.C., declared Bruyneel and Tailwind Sports to be in default in the case after they failed to answer to the lawsuit.

The request for the $451,000 judgment against Tailwind and Bruyneel was joined by Paul Scott, the attorney for Floyd Landis, Armstrong’s former cycling teammate and another confessed doper. Landis is acting as a government whistleblower in the case and would be entitled to an unspecified amount if the request is granted. Landis and his attorneys were owed $2.75 million as part of Armstrong’s total settlement payment of $6.65 million. The government would keep the remaining $3.9 million, according to settlement terms.

After years of denials, Armstrong confessed to doping in January 2013 during a televised interview with talk-show host Oprah Winfrey.

Armstrong, 46, has been banned from sanctioned cycling events for life and ended up paying millions to fight or settle fraud allegations against him through the years. “In excess of 100 mil,” Armstrong said in an e-mail to USA TODAY Sports in January.