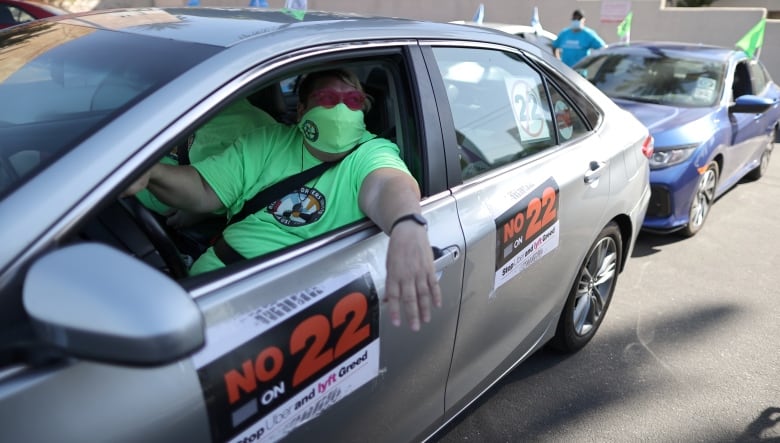 This column is an opinion by Paris Marx, a socialist writer and host of the Tech Won’t Save Us podcast. For more information about CBC’s Opinion section, please see the FAQ.

Ride-hailing giant Uber recently announced its Flexible Work+ plan, which it calls “a modern approach to app-based work in Canada.” The company is asking provincial governments to amend labour legislation so that gig workers would accumulate “benefit funds,” which it proposes they could spend on things like health insurance, retirement plans and education expenses.

On its face, this may sound like an improvement. Workers in the gig economy are subject to precarious and unsafe working conditions, and many don’t even have a human manager they can turn to — their manager is often the algorithm that distributes work on an app. A benefit fund could seemingly help them.

But that’s not the driving force behind this proposal.

Uber could provide benefits and labour protections to workers tomorrow if it chose to, but the company’s business model is based on treating workers as contractors instead of employees. Uber still loses billions of dollars every year after more than a decade in business, and keeping drivers’ pay low while raising prices for customers is the only way it can hope to turn a profit.

The president of the Canadian arm of the United Food & Commercial Workers International Union, Paul Meinema, has said Uber is “dodging the fact that they are the employer and its workers are employees who are entitled to the full protection and rights under current labour laws.”

If provincial governments change their labour laws in line with Uber’s proposal, they will cement the notion that gig workers are not employees and that they can be denied a minimum wage, sick days, access to employment insurance, and the same rights and protections as most other workers.

When Uber announced the Flexible Work+ plan it suggested workers want what it’s proposing, and cited an Uber survey about job satisfaction, even though the questionnaire did not ask about benefits, union rights, or labour classification.

In response, advocacy group Gig Workers United criticized the survey, and quoted delivery courier Brice Sopher who said the plan was, “nothing more than a Prop 22 North — to prevent Canadian gig workers from organizing, and to allow Uber to avoid confronting the real problems of dwindling pay and precarity.”

Proposition 22 is a ballot initiative championed by Uber and other gig employers that was passed in California in November. Here’s a quick history:

Proposition 22 was pitched to voters as an improvement for gig workers, even though it rolled back employment rights those workers had won through years of campaigning, and was opposed by advocacy groups like Rideshare Drivers United and Gig Workers Collective. After the measure passed, some workers reported their pay actually declined, and many don’t qualify for the new benefits due to the amount of working time needed to access them.

Meanwhile, even though the companies warned that prices would increase if Proposition 22 was voted down, services such as DoorDash, Uber Eats and Postmates implemented new fees after it passed that they said were needed to cover the benefits.

Proposition 22 provides a cautionary tale as provincial governments consider how to respond to Uber’s Flexible Work+ proposal, and to the opposing demands from gig workers for the right to unionize and to be recognized as employees.

And it’s not just gig workers who could be affected. Before Proposition 22 passed in California, labour advocates warned it would allow companies beyond the gig economy to start shifting work from employees to contractors — and that’s exactly what happened.

Since the classification of gig workers as contractors is now codified in California law, other companies can start utilizing it. Earlier this year, non-unionized delivery workers at a grocery chain in the state were notified they were being laid off, for example, and replaced by independent contractors working for DoorDash.

If Uber is successful in lobbying for the same sort of legislation in Canada, workers in other industries may also see their professions reclassified along the lines of Flexible Work+, affecting their rights, benefits, and pay.

This debate is not just playing out in Canada. A ruling by the British Supreme Court recently found that Uber drivers should not be considered self-employed. Afterwards, Uber reclassified its 70,000 U.K. drivers as workers (a separate category from “employee”), but refused to provide all of the wages and rights laid out in the ruling, setting the stage for another legal challenge.

Courts in Italy and Amsterdam recently ruled that app-based food delivery workers are employees, and Spain has introduced new legislation to the same effect.

Companies like Uber have classified their workers as contractors for years, helping them rapidly expand and take down competitors by under-pricing their services. However, the legal tide is against Uber and its desire to keep its workers classified as contractors, with a study of more than 40 rulings in 20 countries finding that courts tend to rule in favour of workers.

That is precisely why it is launching campaigns lobbying for new labour laws across the United States, Canada, and Europe like those passed through Proposition 22 in California.

After a pandemic where these workers have been risking their health to deliver things like meals and groceries, the provinces should recognize their essential work by following the example of courts and governments in other nations that are taking steps to protect them with employee status.