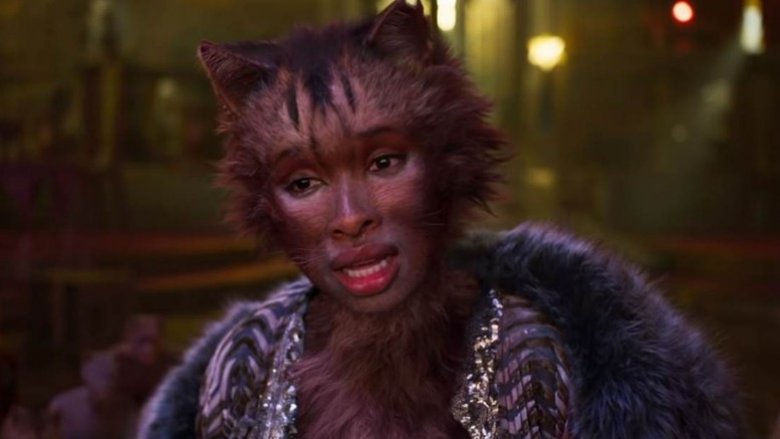 Sorry, dog people. The CATS trailer arrived online, giving audiences their first look at the live-action film adaption of the hit musical. Based on T.S. Eliot’s collection of poems, “Old Possum’s Book of Practical Cats” and penned by Andrew Lloyd Webber, the musical enjoyed a combined 39-year run between London and Broadway while grossing over $2 billion worldwide (yes, BILLION).

Set to hit the big screen on Dec. 20, 2019, the Tom Hooper-directed film boasts a cast of stars such as Idris Elba, Taylor Swift, Ian McKellan, Judi Dench, Rebel Wilson, James Corden, Jason Derulo, and Steven McRae. While the studio hopes the talent and source material combine big bucks at the box office, the trailer was, well, instant nightmare fuel. “Behold…a cinematic adaptation of one of the most dizzyingly atrocious musicals of all time,” A.V. Club‘s Britt Hayes wrote. “Tremble…at the very famous people transformed, via some Cronenbergian VFX wizardry, into animals of the feline persuasion. Bear witness…to the horrors of the unnatural feline-people as they sing and dance for your entertainment. Vomit not…for you surely cannot afford a new MacBook in this economy.” Judi Dench and Taylor Swift’s faces on cat bodies? Hold your milk.

Per CNN, director Tom Hooper talked about the film’s use of “digital fur technology,” but the final result was “an uncanny amalgamation of the actors’ human faces and a feline-adjacent body.” Twitter had thoughts on the not-quite-human-not-quite-feline artistic choice:

“I don’t know what I expected from CATS’ ‘digital fur technology’ but the short answer is NOT this. My brain has melted. My eyes are bleeding. There is no god,” Pajiba film critic Kristy Puchko tweeted.

“My favorite thing about the #Cats trailer is that it didn’t awaken anything (new) in me, sexually. So. Phew,” Pitch Perfect star Anna Kendrick tweeted.

“I don’t know why you’re all freaking out over miniature yet huge cats with human celebrity faces and sexy breasts performing a demented dream ballet for kids,” Crooked Media‘s Louis Virtel wrote.

“Cats the musical but they’re bodega cats and bloods and they’re dealing with gentrification and one of them wants out the game bc they want a better life than ‘just sleeping on bread b,'” Desus and Mero‘s Desus joked.

“i have a cats-related question. there are no humans in the trailer. why is everything in the CATS universe human-sized and not cat-sized. yes i have been thinking about this all morning,” The New York Times‘ Maya Kosoff tweeted.

Actress and singer Bette Midler got political with her thoughts on the trailer. “People are livid over the trailer for Cats! Listen, even if the whole thing was just Dame Judi Dench coughing up a hairball, it would STILL be better than watching AMERICA trying to hack out the slimy hairball in the Oval Office!” she tweeted.

“I know this will be a controversial tweet, but the Cats trailer is exactly how I imagined a trailer for Cats to be,” director Charlie McDowell tweeted.

“The funniest thing I can think of right now is everyone on here going to see Cats and sincerely enjoying it and then leaving the theater talking about their favorite parts,” one user tweeted.

If the weird-looking CGI doesn’t do the trick, IMDb has the film’s official synopsis as follows: “A tribe of cats called the Jellicles must decide yearly which one will ascend to the Heaviside Layer and come back to a new Jellicle life.” Sounds like Christmas fun for the whole family!

“I don’t need you to defend cats okay I saw cats in NEW YORK CITY when I was 10 i know who the MAGICAL MISTWR MISTOFFELEES is I just think the movie looks like I never want to have sex EVER again,” one user tweeted.

“TS Eliot was just a guy like you or me when he wrote CATS at his local Starbucks. Now he is probably gonna have an Oscar and take a selfie w ELLEN. Never give up on your dreams

“The Cats trailer scared me. It’s what would happen if an elderly hoarder with a Hummel figurine fetish dropped acid, ran into the street naked and was happy for the very first time, right before getting hit by a bus,” novelist Paul Rudnick wrote.

The CATS discourse may never die:

You can go see Cats if you want, just know that there is a 75% chance the person sitting next to you is getting hornt up by the weird cat people

I love the CATS trailer because I WANT to be horrified. I WANT to feel!!!