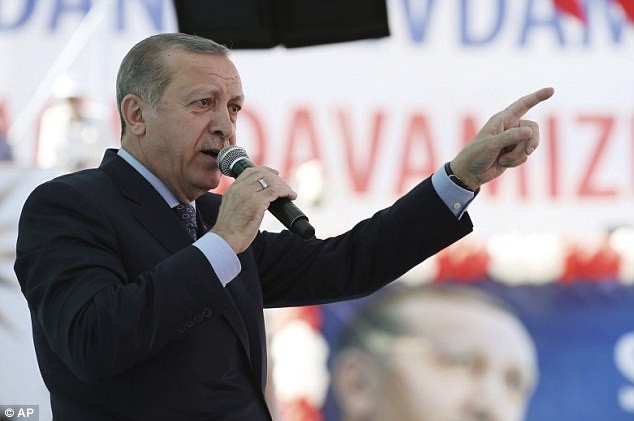 Robert Yuksel Yildirim had barely been at the family’s construction-materials business a year before the company won its first international contract. Now, it’s a conglomerate with interests in mining, ports and chemicals across 28 countries.

Twenty four years after the deal to import coal directly from Russia was sealed, the impetus to expand Yildirim Holding AS beyond its Turkish home base is stronger than ever. The political fallout from a failed coup in July last year is hindering economic growth and making it harder for firms to operate in a market many see as saturated, cluttered with red tape and expensive for acquisitions.

“Deals outside Turkey are much cheaper and better than Turkish opportunities,” said Yildirim, 57, whose last purchase abroad was a port in Ecuador that his company bought for $750 million in 2016. “It is easier to deal with foreign bureaucracy than Turkish bureaucracy.”

The chairman of Istanbul-based Yildirim isn’t alone in expanding abroad. Turkish companies may spend a further $64 billion on overseas acquisitions and setting up new operations abroad by 2023, according to Volkan Kara, a partner in Bain & Co.’s Turkey office. That is after investing $36 billion in the 10 years through 2016, according to a report by Bain and Turkey’s DEIK Outbound Investments Business Council.

“There is a serious flow of investment towards developed countries, especially to the U.S. and Europe,” Kara said . “We project annual investments to continue growing significantly.”

Murat Ulker, a billionaire whose Yildiz Holding AS spent 15 billion liras ($4.3 billion) on overseas ventures through 2016, said he is seeing “significant opportunities” for growth in the Middle East, North America, Africa and Asia. His company made the largest investment outside Turkey to date with the 2014 purchase of Middlesex, U.K.-based United Biscuits Holdings Plc for $3.1 billion.

Companies are seeking to diversify earnings and spread risk after a coup attempt resulted in the detention of opposition party members and human-rights activists, causing relations to sour with Germany, the country’s biggest trading partner. Gross domestic product expanded 2.9 percent in 2016, the slowest pace since a contraction in 2009.

Turkish businesses are used to operating in a country which has faced several “political challenges,” said Jonathan Friedman, a director at London-based risk management consultants Stroz Friedberg Ltd. “And you manage risk by diversifying assets.”

Many companies are acquiring assets to secure raw materials for production or to expand into under-serviced markets. Fertilizer maker Gubre Fabrikalari TAS invested in Iran, while businessman Turgay Ciner’s Park Holding AS bought a controlling stake in soda ash producer OCI Resources LLC in the U.S.

Turkey’s biggest home appliance maker, Arcelik AS, plans to invest $100 million to build a plant with Tata Group to make refrigerators and other goods in India next year after it bought Pakistan’s appliance maker Dawlance Group for $243 million in 2016.

Other companies that have expanded abroad include billionaire Ferit Sahenk’s Dogus Holding AS, which stepped up foreign investments after selling its stake in the country’s biggest listed bank. Electricity producer Zorlu Enerji, which owns plants in Pakistan and Israel, last year said it plans to spend a “sizable amount” in Iran.

Even state-owned utilities have jumped on the bandwagon, with oil and gas producer Turkiye Petrolleri AO, which earns most of its revenue abroad, last year allocating almost 80 percent of its investments outside the country.

“We expect this investment trend to continue among companies in production, transportation, consumer goods and energy industries,” said Efsane Cam, a manager of corporate finance at Istanbul-based brokerage Is Investment.

Yildirim, which plans to bid for U.S. marine terminal operator Ports America Holdings Inc. and co-invest a further $5 billion in a Chinese coal mine, is still seeing too many obstacles in Turkey, especially with antitrust regulations that limit its ability to expand domestically. The group, which has spent $2.5 billion on overseas investments, wants to have 75 percent to 80 percent of its assets outside the country by 2020 from 60 percent currently, according to the chairman.

“Yildirim Group will globally continue to invest in metals and mining, ports and terminals, fertilizers and chemicals, energy, logistics, infrastructure,” he said. “We don’t see so many good opportunities in Turkey that will make us stronger and elevate our position as a global player.”