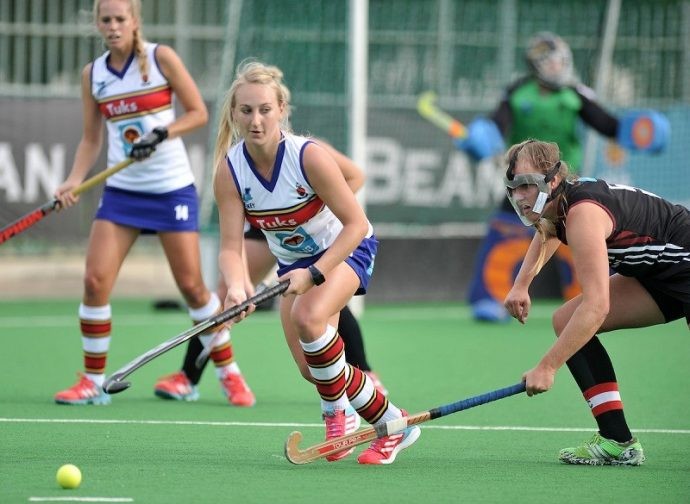 Tuks earned their maiden Varsity Hockey title thanks to a Catherine Morris goal as they defeated Maties 1-0 in Pretoria on Monday night.

It was end-to-end action from the get-go as Tuks used the home support to begin the match on the front foot.

It was the hosts who had the early momentum as Natalie Estevez pulled the strings from deep in midfield.

Maties had Stephanie Botha and Paige Phillips to thank for keeping a clean sheet.

The first penalty corner was awarded in the 14th minute. Maties’ receiver slipped it left but Tuks cleared the resulting slap.

Just seconds later they had their second penalty corner. Tuks were lucky not to concede a P-flick as the ball hit a defender’s leg a metre from goal with the goal keeper out of the picture completely.

A brilliant Tarryn Glasby shot was deflected wide and there was soon respite for the home side as the first chukka came to an end after a period of five minutes spent in the Tuks circle.

It took just 10 seconds for Anél Luus to break through on Maties goal with a backstick effort going inches wide.

The hosts soon forced Nicole la Fleur into a point-blank save and another not long after as momentum swayed once more; this time in favour of Tuks.

Tarryn Glasby was put through one-on-one with Marlise van Tonder but Marissa Poolman came from nowhere to tackle her seconds before she could strike.

Another corner for Maties went begging as the match’s frantic pace eased into a rhythm just on the halftime buzzer.

Both teams would have welcomed the breather and been happy to have clean sheets heading into the third chukka.

Tuks were soon back in the ascendency in the third chukka.

A brilliant move in the 37th minute almost resulted in the opening goal as Danielle Kerdachi displayed a piece of individual brilliance.

Her stickwork dazzling the Maties defence as she slipped the ball to Amy Etherington, who was open on the penalty spot. But her shot was blocked by the brick wall that was La Fleur.

But they score eventually came off their second penalty corner, in the 43rd minute.

The ball was slipped by Estevez to Catherine Morris, who lashed the ball into the roof of the net.

The referee awarded a Maties free hit due to the height of the ball being above the backboard off a penalty corner, but Tuks reviewed and the decision was overturned after it became evident that the ball was deflected off a Maties defender’s stick.

Maties had the majority share of the possession in the final chukka as they pressed for an equaliser. Tuks were playing the match at a far slower pace, happy to slow things down whenever they had possession.

Maties took their Powerplay in the 64th minute and immediately won a penalty corner.

Tarryn Glasby mishit her shot and the ball went wide.

Maties were running out of time. Maties would spend the final two minutes of the match with just nine players as Tuks took their Powerplay.

Hard as they tried they couldn’t break down the Tuks defence and in the end it was Morris’s goal that was the difference.