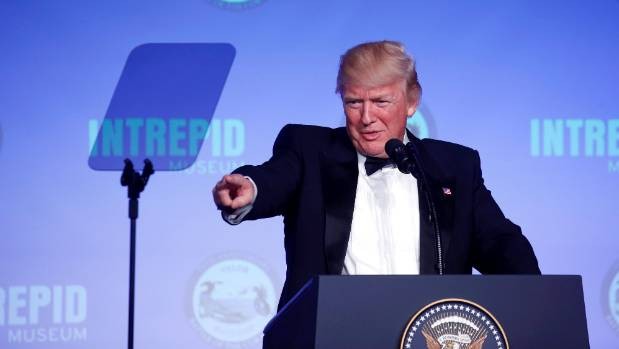 President Trump’s threat to “close down our government” unless Democrats agree to fund his proposed border wall instantly raised the stakes for the showdown over government spending that awaits lawmakers when they return from their August recess.

Escalating a conflict that has been brewing for months, Trump told supporters Tuesday night at a campaign-style rally in Phoenix: “Believe me, if we have to close down our government, we’re building that wall. Let me be very clear to Democrats in Congress who oppose a border wall and stand in the way of border security: You are putting all of America’s safety at risk.”

“Threatening to shut down the gov’t for a campaign promise and a wall we don’t need is irresponsible and reckless,” Thompson tweeted from an account representing the committee’s Democrats.

“Threatening to shutdown the government for a campaign promise that won’t improve security? NOT a good idea,” he wrote.

Trump’s threat comes a little more than a month before federal spending authority expires, requiring Congress to act to keep the government fully operating past Sept. 30. Many Republicans are hoping to include border wall funding in any deal to keep the government open, and key conservative lawmakers have rallied to Trump’s side.

On Tuesday afternoon, before Trump spoke in Phoenix, the chairman of the conservative House Freedom Caucus — which has played a central role in pushing House GOP leaders to fulfill Trump’s agenda — called for funding to build a wall along the Mexican border in a series of tweets.

“Congress would do well to join the President by keeping our own commitments and including border wall funding in upcoming spending measures,” Rep. Mark Meadows (R-N.C.) wrote, in part.

[As Trump ranted and rambled in Phoenix, his crowd slowly thinned]

House Republicans voted last month to provide $1.6 billion in seed funding for the border wall as part of a larger spending package. That bill is expected to be taken up in the Senate, where Democrats can filibuster any measure that funds the wall or includes other GOP provisions that they have termed “poison pills.”

A 2017 spending bill passed into law earlier this year did not include border wall funding after Democrats refused to accept it. That impasse increased pressure on Republicans to deliver wall funding in a future spending battle.

But there is no sign that Democrats will yield on the issue.

In an interview last month, the top Democrat on the House Appropriations Committee signaled that the party considered blocking funding for the wall to be among its highest priorities in any spending negotiations with Republicans. Rep. Nita M. Lowey (D-N.Y.) blasted the GOP for including the $1.6 billion in the recent bill.

“To tack on this wall, which is so immoral and so distasteful to the majority of our caucus, really is unfortunate,” she said.

Rank-and-file Democrats and several caucuses representing them took to Twitter Tuesday to double down on that position.

Tweeted Rep. Don Beyer (D-Va.): “Trump threatens to shut down the government unless we vote to put taxpayers on the hook for a wall he promised Mexico would pay for. Nope.”