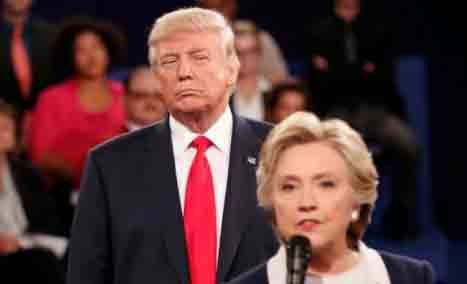 Hillary Clinton said her “skin crawled” as Donald Trump loomed behind her at a presidential debate in St. Louis, and added that she wished she could have pressed pause and asked America, “Well, what would you do?”

The words, Clinton’s most detailed public comments about what happened during one of the campaign’s more memorable moments, are included in her new book, “What Happened,” which she called an attempt to “pull back the curtain” on her losing bid for the presidency.

Some of the moments during the campaign, she said, “baffled” her. Others seemingly repulsed her: In recounting the October incident, she referred to Trump as a “creep.”

The book comes out Sept. 12, but audio excerpts, read by Clinton, were played Wednesday morning on MSNBC’s “Morning Joe.”

In the recording, Clinton noted that she wrote about moments from the campaign that she wanted to remember forever — as well as others she wished she could “go back and do over.”

The moment from the debate appeared to fall into the latter category.

“This is not okay, I thought,” Clinton said, reading from her book. “It was the second presidential debate and Donald Trump was looming behind me. Two days before, the world heard him brag about groping women. Now we were on a small stage and no matter where I walked, he followed me closely, staring at me, making faces.

“It was incredibly uncomfortable. He was literally breathing down my neck. My skin crawled. It was one of those moments where you wish you could hit pause and ask everyone watching, ‘Well, what would you do?’ Do you stay calm, keep smiling and carry on as if he weren’t repeatedly invading your space? Or do you turn, look him in the eye and say loudly and clearly, ‘Back up, you creep. Get away from me. I know you love to intimidate women, but you can’t intimidate me, so back up.’”

Writing “What Happened” was hard, so is what we see every day. As we move forward & fight back, I hope this helps.https://t.co/cD45JRy2Q0 pic.twitter.com/iAMM3tflWc

The debate took place two days after Trump was heard bragging about groping, kissing and trying to have sex with women on the “Access Hollywood” tape — comments made in 2005 on an apparent hot mic.

Afterward, some Republican critics said Trump should drop out of the race. But he ended a video response to the years-old tape’s release by saying: “See you at the debate on Sunday.”

Trump’s actions during the debate were viewed as bullying even before the moment that Clinton recounted.

As The Post’s Sarah L. Kaufman wrote, Trump “paced and rocked and grimaced as spoke; he broke into her time by shouting over her. When she protested that she had not done the same to him, he shot back with all the finesse you’d hear in a middle school gym: ‘That’s ’cause you got nothin’ to say.’

“When it was his turn to speak, Trump got angry, pointed at her, swung his arms around with alarming force.”

His actions were widely mocked and criticized after the debate, and even featured in a “Saturday Night Live” skit that showed him zooming toward an unsuspecting Clinton.

“If a man did that to me on the street … I’d call 911,” political commentator and former Republican strategist Nicolle Wallace said, according to NBC News.

The New York Daily News headline the day after the debate read: “Grab a seat, loser.”

In the post-debate spin room, Clinton surrogates accused Trump of “menacingly stalking” the Democratic nominee. Two body language experts analyzed the debate and concluded Trump was trying to assert his power by roaming the stage while Clinton spoke.

“Trump’s constant pacing and restless movements around the stage attracted attention from Hillary’s words, and visually disrespected her physical presence on the stage, as in ‘I am big, you are small,’ ” David Givens, director of the Center for Nonverbal Studies, a nonprofit research center in Spokane, Wash., told The Post then.

This looks like a poster for a 1970s horror movie pic.twitter.com/vCVGrTLdte

Clinton said in the audio clip played on MSNBC that “What Happened” is not a comprehensive account of the 2016 race — and that it was difficult to write.

“Every day that I was a candidate for president, I knew that millions of people were counting on me, and I couldn’t bear the idea of letting them down — but I did,” she said. “I couldn’t get the job done, and I’ll have to live with that for the rest of my life.”

Simon & Schuster, the book’s publisher, says “What Happened” is Clinton’s “most personal memoir yet.”

“In the past, for reasons I try to explain, I’ve often felt I had to be careful in public, like I was up on a wire without a net,” she writes in the introduction. “Now I’m letting my guard down.”

Immediately after the election, Clinton kept a low profile, though she was occasionally spotted hiking in the woods by her Chappaqua, N.Y., neighbors; SNL even poked fun at the hubbub surrounding her sylvan whereabouts in a sketch called “The Hunt for Hil.”

In recent months, Clinton has slowly reemerged in the public eye, making speeches and giving interviews in which she addressed the historic election.

It’s unclear how much Clinton was paid for writing “What Happened.” Simon & Schuster representatives did not immediately respond to questions sent by email early Wednesday.

The publisher never publicly disclosed how much Clinton received for her 2014 book, “Hard Choices,” though in 2000, Clinton reportedly was paid about $8 million in advance to write a memoir (eventually titled “Living History”) about her years as first lady, according to the New York Times.

Hillary Clinton and Donald Trump traded jabs at their second face-off in a contentious town-hall style debate on Oct. 9, in St. Louis, with moderators Anderson Cooper and Martha Raddatz. (The Washington Post)

Is voting for Hillary Clinton a symptom of low testosterone? This Florida doctor says yes.