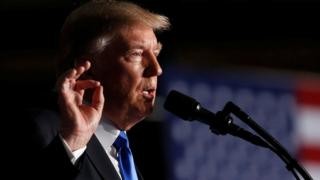 President Donald Trump has said a hasty US withdrawal from Afghanistan would leave a vacuum for terrorists to fill.

He said his original instinct was to pull US forces out, but had instead decided to stay and “fight to win” – avoiding the mistakes made in Iraq.

He said he wanted to shift from a time-based approach in Afghanistan to one based on conditions on the ground and said he would not set out deadlines.

However, the US president warned it was not a “blank cheque”.

“America will work with the Afghan government, so long as we see commitment and progress,” he said.

Mr Trump also warned Pakistan that the US would no longer tolerate the country offering “safe havens” to extremists, saying the country had “much to lose” if it did not side with the Americans.

“We have been paying Pakistan billions and billions of dollars – at the same time they are housing the very terrorists that we are fighting,” he said.

He also said the US would seek a stronger partnership with India.

Meanwhile, Mr Trump made it clear he expects his existing allies to support him in his new strategy, telling them he wanted them to raise their countries’ contributions “in line with our own”.

US Defence Secretary Jim Mattis indicated in a statement “several” US allies had already “committed to increasing their troop numbers”.

But Mr Trump refused to be drawn on how many extra US troops, if any, would be deployed. He had been expected to say another 4,000 would be sent to Afghanistan, the number General John Nicholson, the top US military commander in the country, requested.

Criticising previous administrations, he said: “We will not talk about numbers of troops or our plans.”

However, Mr Trump said there would be an escalation in the battle against groups like al-Qaeda and so-called Islamic State.

“[They] need to know they have nowhere to hide – that no place is beyond the reach of American arms,” he said.

But he also indicated there could one day be a peace deal with the Taliban.

“Some day, after an effective military effort, perhaps it will be possible to have a political sentiment that includes elements of the Taliban in Afghanistan,” he said.

“But nobody knows if or when that will ever happen.”

US combat operations against the Taliban officially ended in 2014, but special forces have continued to provide support to Afghan troops.

Current US troop numbers in Afghanistan are about 8,400.

The Afghan government continues to battle insurgency groups and controls just half of the country.

Mr Trump has previously supported pulling troops out of the conflict, which began under President George W Bush in 2001 after the 9/11 attacks.

“I took over a mess, and we’re going to make it a lot less messy,” Mr Trump said when asked about Afghanistan earlier this month.

“We’re not winning,” he told advisers in a meeting in July.

His defence secretary has argued a US military presence is necessary to fight off threats from Islamist militants.

Defence Secretary Jim Mattis visited Afghanistan over the weekend, saying he was satisfied with the administration’s new strategy.

Former White House strategic adviser Steve Bannon had called for the withdrawal of all US forces, arguing the war was unwinnable.

But he was fired by the president on Friday.