Trump suggests historic summit with North Korea could be delayed 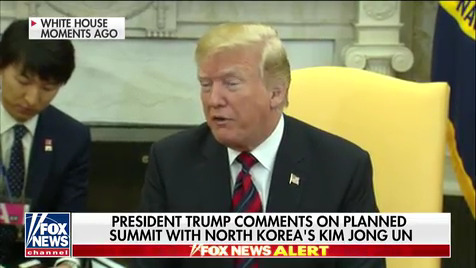 Trump suggests historic summit with North Korea could be delayed

President Trump on Tuesday suggested the historic summit between him and North Korean dictator Kim Jong Un could be delayed past the scheduled date of June 12 in Singapore, amid threats from the rogue regime to cancel talks after U.S.-South Korean military exercises.

The president’s comments came during an Oval Office meeting with visiting South Korean President Moon Jae-in. The two leaders discussed a strategy for denuclearization of the Korean Peninsula, and Trump’s potential upcoming summit with Kim.

“If it doesn’t happen, maybe it will happen later. You never know about deals. I’ve made a lot of deals, you never really know,” Trump said about the summit. “It may not work out for June 12.”

Last week, North Korea cancelled a high-level summit with South Korea, and threatened to cancel the meeting with Trump following U.S.-South Korean military exercises, which the rogue regime’s media outlet suggested were a rehearsal for a potential invasion of the North.

Despite a potential delay in the summit, Moon expressed confidence, noting they are “one step closer” to a denuclearized Korean Peninsula and saying that he believes Kim is “serious” about the talks.

Trump said he would like the denuclearization of the peninsula to be “all in one,” noting that he did not “want to exclude other ways, but would prefer it to be all in one.”

“I can guarantee Kim’s safety. He will be safe. He will be happy. His country will be rich,” Trump said. “Kim will be extremely happy if it works out.”

Moon said North Korea has the chance to be a great country, and urged Kim to “seize this opportunity.”

“I have every confidence that Trump will achieve a historic feat and I will offer all the support I can,” Moon said, adding that he would “guarantee the future of Kim.”

Trump followed by saying that a successful South Korea and North Korea was “largely up to them where to go,” whether to stay as separate nations or join as one.

In regard to the summit, Trump said it would “work out.”