Trump signs Russia sanctions bill, but makes clear he’s not happy about it 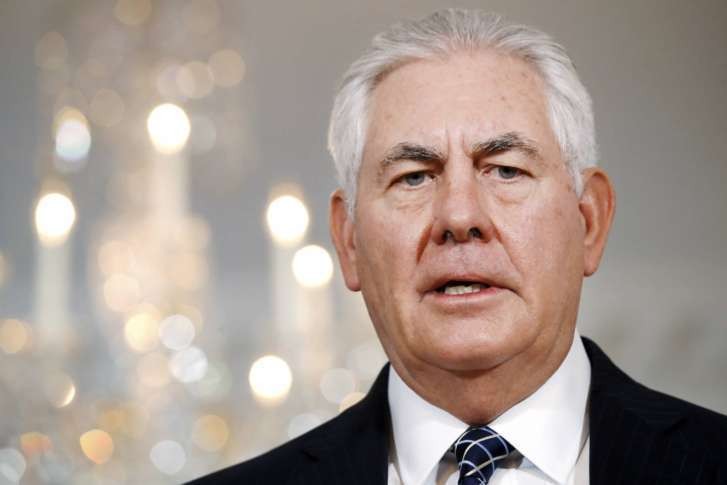 President Trump on Wednesday signed into law a bill that imposes new sanctions on Russia, but he immediately expressed doubts about its constitutionality and criticized Congress for giving itself greater powers to prevent him from rolling back penalties aimed at Moscow.

Trump’s reluctant signing of the legislation came nearly a week after it was approved by overwhelming, bipartisan majorities in both the House and Senate that assured any veto could be overridden. Trump’s statement, however, raised questions about whether he will enforce all its provisions.

He called the bill — which imposes new penalties on Russia, Iran and North Korea — “seriously flawed,” primarily because it restricts his ability to negotiate sanctions concerning Moscow without congressional approval.

“By limiting the Executive’s flexibility, this bill makes it harder for the United States to strike good deals for the American people, and will drive China, Russia, and North Korea much closer together,” Trump said in a statement on Wednesday morning. “The Framers of our Constitution put foreign affairs in the hands of the President. This bill will prove the wisdom of that choice.”

While Trump said he would honor this section of the law despite his qualms, he argued other parts of the bill are “clearly unconstitutional” and held out the possibility he would ignore provisions concerning the territorial integrity of Ukraine and the denial of visas to foreign nationals targeted by the bill.

“My Administration will give careful and respectful consideration to the preferences expressed by the Congress in these various provisions and will implement them in a manner consistent with the President’s constitutional authority to conduct foreign relations,” he said.

Trump said his problems with the legislation did not mean he opposed its underlying principles.

“I favor tough measures to punish and deter bad behavior by the rogue regimes in Tehran and Pyongyang,” he said. “I also support making clear that America will not tolerate interference in our democratic process, and that we will side with our allies and friends against Russian subversion and destabilization.”

But lawmakers’ solidarity in tying Trump’s hands on Russian sanctions reflects a deepening concern about the White House’s posture toward Moscow, which critics have characterized as naive. The new Russia sanctions expand on measures taken by the Obama administration to punish the Kremlin for its alleged efforts to interfere in the 2016 election. But Trump has continued to cast doubt that Russia alone was responsible and he has called the investigations in Congress and by the special counsel into the issue a “witch hunt.”

[The Debrief: Pence talks tough on Russia while finding his footing abroad]

The administration’s lobbying of lawmakers in public and private to pull back the bill’s requirement that Congress review any attempt by the president to amend sanctions against Moscow ultimately fell on deaf ears. The measure imposes a 30-day review period to give Congress a chance to vote down any of the president’s proposed changes to these policies before they can be implemented.

“Today, the United States sent a powerful message to our adversaries that they will be held accountable for their actions,” Ryan said. “These sanctions directly target the destructive and destabilizing activities of Iran, Russia, and North Korea.”

Trump said he signed the legislation despite his reservations for the sake of “national unity,” but in a pointed jab at lawmakers in his own party, he questioned Congress’s ability to negotiate sanctions based on its inability to approve the Republicans’ health-care legislation.

“The bill remains seriously flawed — particularly because it encroaches on the executive branch’s authority to negotiate,” Trump said. “Congress could not even negotiate a healthcare bill after seven years of talking.”

Trump’s decision to detail his concerns in a signing statement, asserting which parts of the law he would choose to enforce, follows in a tradition that has grown more common among modern presidents. President George W. Bush frequently used signing statements to assert that he could selectively enforce or ignore parts of bills passed by Congress, including to rebuff congressional restrictions on interrogation techniques. The practice of issuing signing statements continued under Obama.

Constitutional law experts said with the sanctions bill, Congress rightfully asserted its own powers to serve as a check on the executive branch, even on matters of national security.

Michael Glennon from the Fletcher School of Law and Diplomacy said that Trump’s statement was a “gross misreading” of the case law he cited to bolster his claim that the congressional review provision had unconstitutionally robbed him of the power to negotiate.

“That’s obviously a misguided interpretation of his constitutional authority,” Glennon said. “Congress has very broad authority over foreign commerce — it’s explicitly given the power to regulate commerce with foreign nations. It could have, if it desired, imposed those sanctions without giving the president any waiver authority whatsoever.”

Senators who voted for the bill said they were perplexed by the president’s assertion it was unconstitutional.
“I don’t know what he’s talking about,” said Sen Tim Kaine (D-Va). “I don’t think that’s going to stand up.”

“It doesn’t matter to me what the signing statement says,” he said. “I know there’s been some resistance at the White House on congressional review, but I think it’s a good and important piece of legislation. I had that conversation with the president directly, and I am glad he signed it and that it has become law.”

Russia has already retaliated against the United States for the new sanctions, announcing that it would order the U.S. Embassy there to reduce its staff by 755 people and seize U.S. diplomatic properties.

“The Trump administration has shown its total weakness by handing over executive power to Congress in the most humiliating way,” he tweeted.

For now, Trump’s desire to improve relations with Russia has hit a major speed bump at the same time Americans are expressing growing support for an adversarial approach toward Moscow, according to a survey released Wednesday by the Chicago Council on Global Affairs.

The poll found 53 percent support actively working to limit Russia’s power compared with 43 percent who favor friendly cooperation and engagement, a sharp reversal from last year when 58 percent favored cooperative efforts. Over 4 in 10 said Russian influence in U.S. elections represents a “critical threat” to the country.

The poll found mixed support for imposing additional sanctions, with 38 percent saying they should be increased and 41 percent saying they should be kept about the same. Far fewer, 17 percent, said the United States should decrease or eliminate sanctions on Russia, according to the survey of a random sample of 2,020 adults conducted June 27-July 19.

Trump praised some recent changes made to the legislation that he said would help U.S. companies, such as by giving the Treasury Department more flexibility when handing out licenses.

But he made clear that he feels Congress should leave negotiating with foreign powers to him.

“I built a truly great company worth many billions of dollars,” Trump said in his statement. “That is a big part of the reason I was elected. As President, I can make far better deals with foreign countries than Congress.”

Scott Clement contributed to this report.