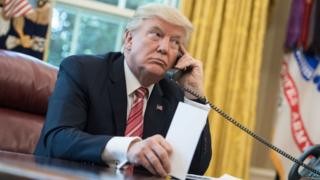 US President Donald Trump urged the Mexican president to stop publicly saying he would not pay for a proposed border wall, according to transcripts.

“You cannot say that to the press,” he reportedly told him.

In a rancorous call, President Trump tells him it was the “worst” conversation he had that day, and one with Russian President Vladimir Putin was more pleasant.

Mr Trump launched his presidential campaign on a promise to build a wall along the US southern border and vowed to make Mexico pay for the project.

But the transcripts show the US president acknowledged the funding would come from other sources, saying the money “will work out in the formula somehow”.

He added: “If you are going to say that Mexico is not going to pay for the wall then I do not want to meet with you guys anymore because I cannot live with that.”

The House of Representatives approved $1.6 billion towards the border wall last week, and the federal government has been viewing proposals submitted by construction contractors.

Speaker of the House Paul Ryan, the highest ranked congressional Republican, also released a video this week of his visit to the southern border, saying “it’s time for The Wall”.

Here are some key quotes, with analysis by the BBC’s Anthony Zurcher.

AZ: Donald Trump lost New Hampshire in the general election, but he won its Republican primary last February, which cemented his status as the front-runner for the party’s nomination. While he was campaigning there he acknowledged the state’s opioid addiction epidemic, but never in such derogatory terms.

TRUMP: “You have some pretty tough hombres in Mexico that you may need help with, and we are willing to help you with that big-league. But they have to be knocked out and you have not done a good job of knocking them out.”

AZ: The “tough hombre” line had leaked – and been roundly derided as insensitive – shortly after the president had his conversation with Mr Nieto. Now it can be viewed in context, which doesn’t do much to help the president appear diplomatic.

TRUMP: “Your words are so beautiful. Those are beautiful words and I do not think I can speak that beautifully, okay? It would be great to put those words at the end of the statement.”

AZ: During the campaign, Mr Trump once boasted: “I know the best words.” Perhaps the president is acknowledging that, in Mr Nieto, he’s finally met his match.

TRUMP: “This [refugee resettlement deal] is going to kill me. I am the world’s greatest person that does not want to let people into the country.“

AZ: Mr Trump apparently walked into his phone call with Mr Turnbull with no clear understanding of the details of the refugee resettlement agreement, aside from what “somebody” told him the day before.

TRUMP: “I guarantee you they [refugees] are bad. That is why they are in prison right now. They are not going to be wonderful people who go on to work for the local milk people.”

AZ: The refugees in question were being detained, not imprisoned – a key difference. And, as Mr Turnbull points out, the US did not agree to admit all 1,250 individuals, but rather to screen them and then admit only those who would pose no threat to the “milk people”.

TRUMP: “I have had it. I have been making these calls all day and this is the most unpleasant call all day. Putin was a pleasant call. This is ridiculous.”

AZ: There were news reports after the conversation that Mr Trump’s interactions with Mr Turnbull were less than cordial. The president and the White House denied it, but the transcript tells a different story. The line about Vladimir Putin is just the icing on the cake.