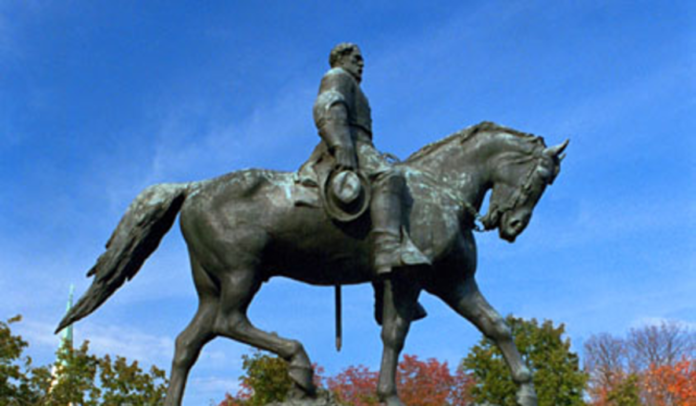 Following the violence in Charlottesville, Va. that was sparked by plans to remove the Robert E. Lee statue, cities across the country are stepping up efforts to pull Confederate monuments from public spaces. (Reuters)

President Trump on Thursday mourned the loss of “beautiful statues and monuments” in the wake of the violent clashes in Charlottesville during a white supremacist demonstration protesting the planned removal of a statue depicting Confederate military commander Robert E. Lee.

Sad to see the history and culture of our great country being ripped apart with the removal of our beautiful statues and monuments. You…..

…can’t change history, but you can learn from it. Robert E Lee, Stonewall Jackson – who’s next, Washington, Jefferson? So foolish! Also…

…the beauty that is being taken out of our cities, towns and parks will be greatly missed and never able to be comparably replaced!

Trump’s string of morning tweets made clear the president was not willing to back down over his claims Tuesday that some of the demonstrators had legitimate grievances over the loss of Southern “history,” and that “both sides” were to blame in the mayhem that left a woman dead and at least 19 more injured. Trump made those claims a day after he had belatedly condemned the neo-Nazi and Klux Klan groups that organized the Unite the Right rally, and politicians from both parties have criticized the president for inflaming racial tensions and failing to provide clear moral leadership for the nation.

Some white supremacist leaders, including David Duke, the former KKK grand wizard, have praised Trump for his “honesty” and “courage.”

President Trump asked if statues of George Washington and Thomas Jefferson should be removed since they owned slaves while speaking in New York on Aug. 15. (The Washington Post)

During his remarks Tuesday and again in his tweets Thursday, Trump argued that Lee and fellow Confederate general Stonewall Jackson, who commanded Southern forces in the Civil War to secede from the United States, are important and admired historical figures in the South and that they could be equated to Founding Fathers George Washington and Thomas Jefferson, who owned slaves and thus could potentially be subject to a modern-day backlash that would tarnish their legacies.