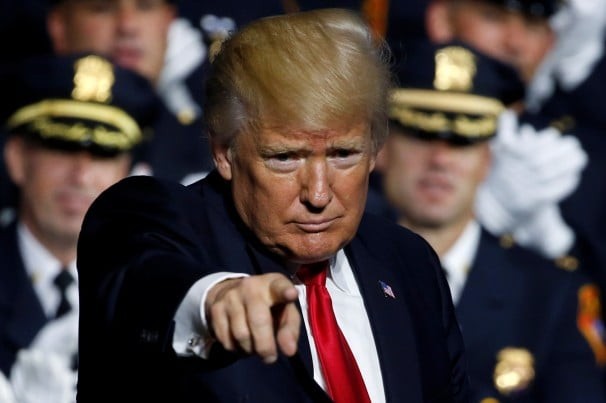 “They look like fools,” the president wrote on Twitter — and unless they tried yet again to repeal and replace Obamacare, they would be “total quitters” too.

Republican Senate must get rid of 60 vote NOW! It is killing the R Party, allows 8 Dems to control country. 200 Bills sit in Senate. A JOKE!

At first, Trump seemed resigned to let the Affordable Care Act, also referred to as Obamacare, take its course, convinced that the program will fail and force Congress to replace it.

3 Republicans and 48 Democrats let the American people down. As I said from the beginning, let ObamaCare implode, then deal. Watch!

But shortly after the sun rose on Friday, Trump began pushing for new bills, which he argued could not pass unless the Senate abolished the legislative filibuster, which had nothing to do with last week’s failure on the Obamacare repeal.

If Republicans are going to pass great future legislation in the Senate, they must immediately go to a 51 vote majority, not senseless 60…

The filibuster lets a minority party block legislation that would ordinarily pass with a simple majority of votes.

Trump acknowledged in his tweets that “parts of health care could pass at 51″ votes — as Friday’s repeal bill could have.

But “so many great future bills & budgets need 60 votes,” Trump wrote, before digressing from health care to post a #FlashBackFriday tweet, and then to announce that he’d replaced his White House chief of staff.

As he continued his tweet storm into Saturday, Trump offered examples of bills that could not abide a filibuster — along with heaping new demands, threats and insults on Republican senators.

He insisted that Senate Majority Leader Mitch McConnell (R-Ky.) eliminate the filibuster immediately, although McConnell dismissed the idea when Trump raised it months ago.

By way of persuasion, apparently, Trump wrote that Republican senators “look like fools and are just wasting time,” and will “NEVER win” until they kill the rule.

Republicans in the Senate will NEVER win if they don’t go to a 51 vote majority NOW. They look like fools and are just wasting time……

It’s worth noting that while Trump now attacks the filibuster as antiquated, four years earlier he defended it as a venerable tradition dating back to Thomas Jefferson. Once used rarely and memorably (as when a senator spoke and sang for 15 hours to block a vote in 1992), the filibuster has become an almost routine tactic for minority parties to impede bills and Cabinet and judicial nominees they can’t defeat in a straight-up vote.

On Saturday, Trump blamed the filibuster for hypothetically allowing Democrats to block “complete Healthcare,” though so far Republican senators have not been able to unite around even a narrowly tailored bill, such as Friday’s attempt to pass a so-called skinny repeal.

Trump also wrote that “Kate’s Law,” a bill that would increase punishments for criminals who illegally reenter the United States after being deported, would never pass with the filibuster in place.

To attempt a summary of his arguments so far: Trump knows that some health-care bills could pass through the Senate with a simple majority of votes. Friday’s repeal bill could have, for example. But Republicans need to kill the filibuster anyway, Trump argues, lest it allow Democrats to block a more sweeping health-care reform bill, which does not yet exist but will be supported by a majority of senators (but not 60 of them) once it is written.

If that logic strikes you as confusing, you’re not alone:

If McCain had just voted yes they would have had those 60 votes required under reconciliation! No, wait…. https://t.co/UkHyqx89aX

And yet Trump was not nearly done. Shortly before 8 a.m., he tweeted: “If the Senate Democrats ever got the chance, they would switch to a 51 majority vote in first minute.”

And also: “They are laughing at R’s. MAKE CHANGE!”

And while Democrats were laughing at his party, Trump wrote, “the people of our great country are still being forced to live with imploding ObamaCare!”

At the beginning of his rant — if you recall — Trump had wanted Congress to let Obamacare implode. Now, midway through, implosion was a bad thing.

3 Republicans and 48 Democrats let the American people down. As I said from the beginning, let ObamaCare implode, then deal. Watch!

After seven years of “talking” Repeal & Replace, the people of our great country are still being forced to live with imploding ObamaCare!

Things are so bad, Trump wrote, that “if a new HealthCare Bill is not approved quickly, BAILOUTS for Insurance Companies and BAILOUTS for Members of Congress will end very soon!”

He then digressed again to talk about the stock market — up since his election, he wrote. But Trump returned to his health-care monologue in the late afternoon, with another dig at Republicans who have spent years trying and failing to reform the nation’s health-care system.

Unless the Republican Senators are total quitters, Repeal & Replace is not dead! Demand another vote before voting on any other bill!

The filibuster isn’t what it used to be. It’s time to bring the old way back.

The filibuster was already doomed before the nuclear option vote