Trump: Impeach me and the market crashes 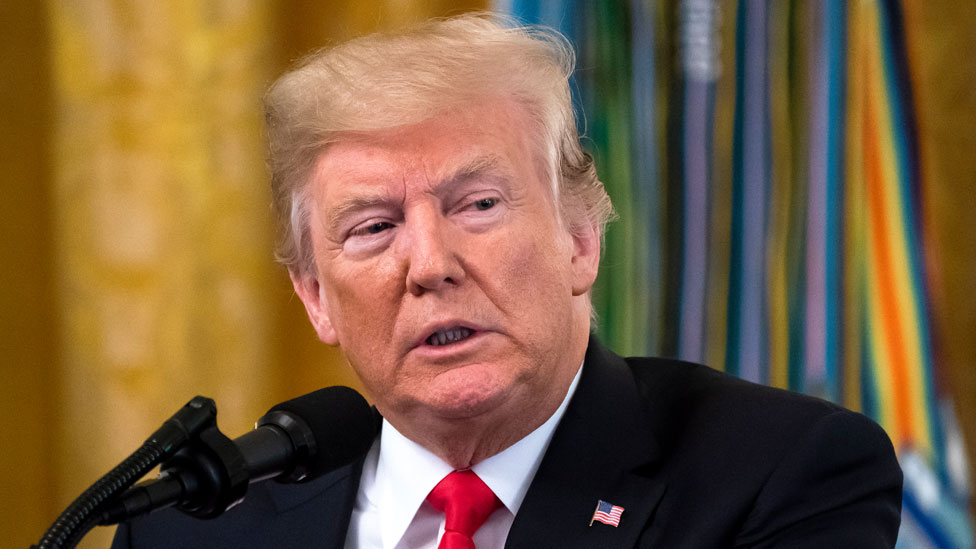 US President Donald Trump has responded to speculation that he might be impeached by warning that any such move would damage the economy.

In an interview with Fox & Friends, he said the market would crash and “everybody would be very poor”.

He was speaking after Michael Cohen, his ex-lawyer, pleaded guilty to violating election laws and said he had been directed to do so by Mr Trump.

Correspondents say it is unlikely Mr Trump’s opponents would try to impeach him before November’s mid-term elections.

Why does Trump say the market would crash?

“I don’t know how you can impeach somebody who’s done a great job,” Mr Trump told Fox and Friends.

“I tell you what, if I ever got impeached, I think the market would crash, I think everybody would be very poor.”

Pointing to his head, he said: “Because without this thinking, you would see numbers that you wouldn’t believe in reverse.”

What did he say about hush money?

Under oath, Cohen said he had paid the money “at the direction” of Mr Trump, “for the principal purpose of influencing the election”.

However, Mr Trump insisted the two payments had not broken election campaign rules.

He said that the payments had come from him personally, not from the campaign, but he had not known about them until “later on”.

In July, Cohen released audio tapes of him and Mr Trump allegedly discussing one of the payments before the election.

The president also accused Cohen of making up stories to receive a lighter sentence.

He added: “And by the way, he pled to two counts that aren’t a crime, which nobody understands.

“In fact, I watched a number of [TV] shows. Sometimes you get some pretty good information by watching shows. Those two counts aren’t even a crime. They weren’t campaign finance.”

So did the payments break campaign rules?

The hush money payments were not reported to the Federal Election Commission during the campaign.

The question is whether the payments were made to protect Mr Trump’s personal reputation or to protect his image as a presidential candidate.

Under US election rules, any payments made with the aim of influencing a vote must be reported.

For more on this story:

If Mr Trump were to be prosecuted over the money – not through the normal courts, because he is the sitting president, but conceivably in Congress, through an impeachment process – investigators would have to prove that he had indeed given the money to Cohen for electoral reasons.

How has Trump contradicted himself?

In his first public comments, back in April, about his alleged affair with Stormy Daniels, Mr Trump denied knowing about the $130,000 (£100,000) payment made to the actress via Cohen.

Ms Daniels, whose real name is Stephanie Clifford, alleges that she and Mr Trump had sex in a hotel room in 2006.

Asked by a reporter in the press cabin of Air Force One if he had any knowledge about where Cohen had got the money to pay Ms Daniels, the president responded at the time: “I don’t know.”

Any action against Mr Trump is unlikely until after the mid-term elections on 6 November, when the opposition Democrats will seek to break the hold of Mr Trump’s Republican Party on Congress. Republicans currently have a majority in both the House of Representatives and the Senate.

In the meantime, Cohen may agree to testify to the inquiry into alleged collusion between the Trump campaign and Russia.

There is no confirmation that Cohen will speak to Robert Mueller’s inquiry but his personal lawyer has said his client is happy to talk.