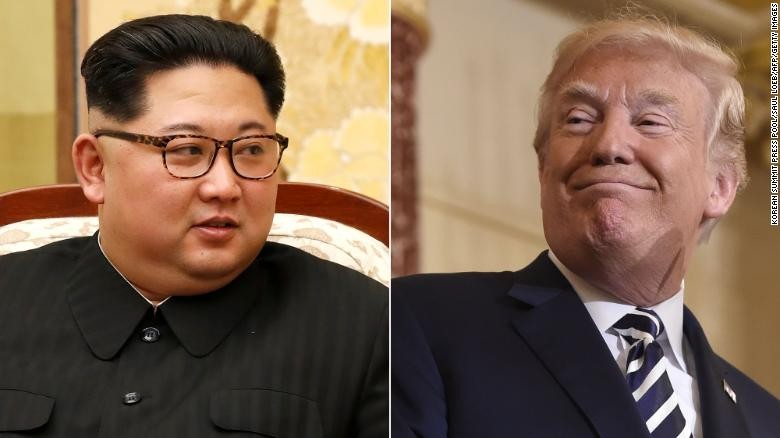 The President is taking his political chaos theory beyond America’s borders and racking up wins for his faithful political base.
Positioning himself as a domineering global figure to shore up his standing back home, Trump is changing the subject from the scandals hounding his administration ahead of the midterm elections.
“We’re fighting and we’re finally putting America first,” Trump roared at a rowdy campaign rally on Thursday night in Indiana, after a week in which his interventions rocked the world.
It’s a spectacle that is being watched with foreboding abroad. America’s allies, for example, have made no secret of their intense frustration at Trump’s exit from the Iran nuclear deal.
European diplomats are becoming increasingly concerned that their nations’ priorities are becoming collateral damage to Trump’s base.
In recent days, Trump has trashed the Iran deal and sent China a staggering ultimatum, demanding huge concessions on trade. Next week, the US will move its embassy in Israel from Tel Aviv to Jerusalem — a move that defied the warnings of America’s Arab allies. Trump is building on a record that saw him pull out of the Paris climate accord and ditch a massive Trans-Pacific Partnership trade pact last year.
It’s a rampage through the constraints that have governed American foreign policy for generations, and it’s dismayed America’s friends.
Some seasoned observers fear it could backfire.
“He relentlessly is a bully with everything and everybody. That’s what the Europeans have recently thought on the Iran agreement and trade,” David Gergen, an adviser to former Democratic and Republican presidents and CNN contributor, said Thursday. “He is trying to bully the Chinese. He is trying to bully in the Middle East. It is a pattern that in a really powerful nation can serve him well, but it is the pattern of an authoritarian.”
But Trump doesn’t care: He’s doing exactly what he was sent to the White House to do.
And his supporters approve.
“We finally got somebody with some balls,” Ron Farster, a Trump voter from western Pennsylvania, told CNN’s Martin Savidge, saying the President was doing “great.”
Trump was introduced in Indiana on Thursday by home state hero Vice President Mike Pence, who described his boss as a “a man of his words” and a “man of action.”
The President’s desire to leverage his statesmanship for political gain played out all day Thursday.
In the early hours he was out at Joint Base Andrews outside Washington, choreographing a dead-of-night television show to welcome three American prisoners home from North Korea and predicting huge success for his summit with leader Kim Jong Un.
By Thursday night, he was in Elkhart, Indiana, celebrating his dismissal of the Iran nuclear deal and drawing huge cheers from his crowd.
“With every action we will stand up for America,” Trump said.
Trump’s critics accuse him of making the nation less safe, causing chaos abroad, ripping up multilateral deals, alienating America’s friends and presiding over a retreat from its international leadership role and commitments. If it all starts to go wrong, his strong-arm foreign policy could begin to look like a political mistake.
But until then, his man-of-action foreign policy looks like it will work as a political strategy.
His domineering persona is attractive to loyalists who wanted a President who wouldn’t be pushed around.
Foreign policy is rarely decisive in elections, but since charting America’s course abroad is an area where a President has the most power to act alone, it’s often been a refuge for commanders in chief at times of political stress.
So Trump was able to pose at his rally as a statesman bestriding the world and to change the subject from Stormy Daniels, the Russia probe and the endless revelations about the investigations into his lawyer Michael Cohen.
Trump’s North Korea initiative could turn out to be particularly valuable.
His success in getting the US prisoners out of the isolated state and his upcoming summit with its leader, Kim, have the potential to be a rare unifying venture for a President who long ago polarized public opinion.
If he’s successful in convincing Kim to agree to a verifiable eradication of his nuclear weapons program — a huge if — Trump will have achieved a breakthrough that has eluded previous presidents. If he can end the standoff that has prevailed since the 1950-53 Korean War, he will have won a place in history that may offer redemption in posterity even if his presidency ends in ignominy.
A new CNN poll shows that after rattling the nation and the world last year by threatening to wipe North Korea off the map, his turn to diplomacy is winning increasing public approval.
Some 53% of Americans approve of his handling of North Korea policy and 77% back his decision to meet Kim at a summit in Singapore next month.
That means Trump’s stewardship of the nuclear crisis is now far more popular than the President himself.
But it also raises the tantalizing possibility that a successful outcome to the summit and a dominant showing abroad could begin to lift the President’s overall approval rating a little ahead of midterm elections in November.

There’s another reason why the presidency’s relatively unchecked power in foreign affairs is attractive to Trump and fits the character of a man who likes giving orders, doesn’t like being challenged and is used to being the boss: It helps him rack up a long list of campaign promises kept, a particularly enjoyable feat for a President who governs by scorecard.
In recent days, Trump has ditched the Iran deal, demanded staggering trade concessions from China, shown an unpredictable streak in North Korea and put European allies in their place — all of which he promised to do as a candidate.
“The United States no longer makes empty threats. When I make promises, I keep them,” Trump said before violating the Iran deal on Tuesday, showing the strongman flourish that his fans love.
Trump is often mocked as someone who likes to return to his own bed at night, who disdains long trips abroad.
But he might get a taste for travel if his roll continues through the G-7 summit in Canada next month, the North Korea summit and a long-delayed trip to the United Kingdom in July.
His globe-trotting might also offer an opening to his legal team if they want to stall an effort by special counsel Robert Mueller to get him to testify.
Trump’s lawyer Rudy Giuliani and other presidential associates have already made the argument that with Trump keeping all sorts of international balls in the air it could be detrimental for him to be distracted by preparing for a deposition.
“I could not go to the President and say, take two days off to get ready for that and screw the whole thing with North Korea,” Giuliani told Fox News’ Sean Hannity earlier this month. “He’s our President. He is going to negotiate, I believe, a non-nuclear situation on the Korean Peninsula. And you’re going to interfere with that? That’s why the Founding Fathers created this immunity from prosecution and subpoena.”
Share
Facebook
Twitter
WhatsApp
Pinterest
Linkedin
ReddIt
Email
Print
Tumblr
Telegram
Mix
VK
Digg
LINE
Viber
Naver
Previous articleTrump announces North Korea summit will be in Singapore
Next articleAT&T’s payments to Trump lawyer Michael Cohen ‘the definition of draining the swamp