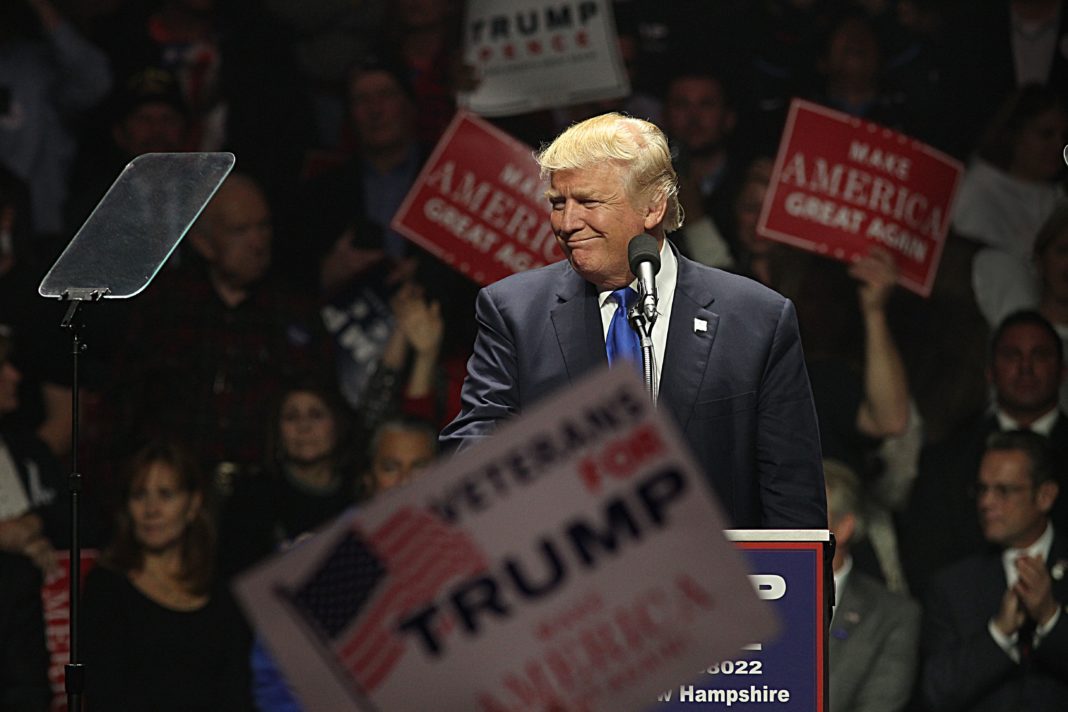 Republican presidential candidate Donald Trump speaks at a rally at SNHU Arena in Manchester, NH, on Nov. 7, 2016, the night before election day.

President Donald Trump heads to New Hampshire on Thursday to gain a toehold in a state he barely lost in 2016 — and an old friend plans to come along.

At a Thursday night rally, Trump will make his case for 2020 reelection to a state that has hardly become more fond of him since he came up short against Hillary Clinton. The president’s campaign has pinned its hopes for its second run to the Granite State’s strong economy — even if Trump may spend more of his time in Manchester discussing immigration and railing against his political rivals than touting low unemployment.

Asked Thursday on the New Hampshire Today radio show what his “message” for the rally will be, Trump talked up the event itself. He claimed an estimated 12,000 people would come, adding that “we’re going to have a lot of overflow.” The president called New Hampshire residents “incredible people” and highlighted his primary win there in 2016, which “was really something special.”

A former Trump ally could soon hitch his political fortunes in the state to the president’s. Former Trump campaign manager Corey Lewandowski is expected to meet with Trump in New Hampshire and attend the rally amid speculation that he could challenge Democratic Sen. Jeanne Shaheen next year.

New Hampshire carries only four electoral votes in the presidential election, but the total does not capture its importance in 2020. The state’s presidential elections have been close for years — an Al Gore victory there in 2000 would have put him in the White House instead of President George W. Bush, with or without the contested state of Florida. Trump comes to the state as Democratic presidential primary contenders flock there to build support for its February primary, the second nominating contest in the country.

“Really since the 1990s it’s been a state that’s been considered a battleground state largely because it’s been divided,” said Andy Smith, director of the University of New Hampshire Survey Center and a political science professor at the university.

Shaheen, a second-term senator, is also among only a handful of Democrats running for reelection in states where Trump was competitive in 2016. Republicans and Democrats covet the seat as they fight for control of the Senate – and the potential to control or check a president’s legislative agenda.

The Trump campaign has started a push to compete in New Hampshire after the president lost the state by only 0.3 percentage points in 2016. On Wednesday, the campaign and the Republican Party announced its 2020 leadership team for the state, which includes three campaign co-chairs.

Will the economy save Trump?

New Hampshire had the fourth-lowest unemployment rate in the country – a mere 2.5% — in June, according to the Labor Department. Still, the economy may not be enough to help Trump win the state.

Only 42% of New Hampshire adults approve of the job the president is doing, versus 53% who disapprove, according to a UNH poll released this week. About half, or 49%, of adults in the state said they approve of how Trump is handling the economy, while 44% said they disapproved.

Opinions on the economy reflect a deep partisan divide: 90% of Republicans approve of how he has handled the economy, versus 53% of independents and 9% of Democrats. Trump will likely tout the economy more to turn out Republican voters in New Hampshire than to sway independents or Democrats, Smith said.

The Democrats trying to take on Trump next year have argued his policies have not lifted the working class despite a solid overall economy. In a joint statement Wednesday, the New Hampshire leadership of 21 Democratic presidential campaigns said: “Trump’s presidency has been defined by broken promises, hateful rhetoric, and choosing to side with lobbyists and the top 1% at the expense of everyone else.”

Trump has had to defend the state of the U.S. economy in recent days as growing fears about a recession have caused rocky stock market trading.

New Hampshire voters consider health-related issues even more important than the economy, according to surveys. A UNH poll this week found that 38% of adults consider drugs the most important issue facing the state, followed by health care at 8%.

New Hampshire had the fourth-highest opioid overdose death rate in the country in 2017. Trump once called the state a “drug-infested den,” according to The Washington Post.

The Democratic primary and the party’s challenge to Trump will draw most of the national attention next year. Even so, Shaheen may need to hold her seat if Democrats hope to win Senate control. Republicans currently have a 53-47 edge in the chamber.

Former New Hampshire House Speaker William O’Brien and retired Brig. Gen. Don Bolduc, among others, have already entered the state’s GOP Senate primary. If Lewandowski jumps into the race, he appears to have a good chance of earning Trump’s endorsement, which goes a long way in GOP primaries.

Lewandowski, 45, was fired from his role as Trump campaign manager in June 2016, months before the general election. The move came amid questions about his ability to manage the national operation.

He had also faced a battery charge after he grabbed Breitbart News reporter Michelle Fields at a Trump campaign event in March 2016. The charge was dropped in April 2016.

Lewandowski has worked as an advisor at lobbying firm Turnberry Solutions, though not while formally registered as a lobbyist, according to Politico. Since Trump took office in 2017, he has looked to leverage his connection to the president.

In recent days, Lewandowski has tweeted links to news articles about him considering a Senate run. He has also shared stories critical of Shaheen.

If he enters the race and wins the Republican primary, Lewandowski would face a tough task in unseating Shaheen. In 2014, a strong election year for Republicans, she defeated former Massachusetts GOP Sen. Scott Brown by about 3 percentage points.

A UNH survey this week found 51% of adult approve of the job Shaheen is doing, while 30% disapprove. Still, respondents to the same poll were split on whether she should be reelected — 43% said she should get another term and another 43% said the state should elect someone else.