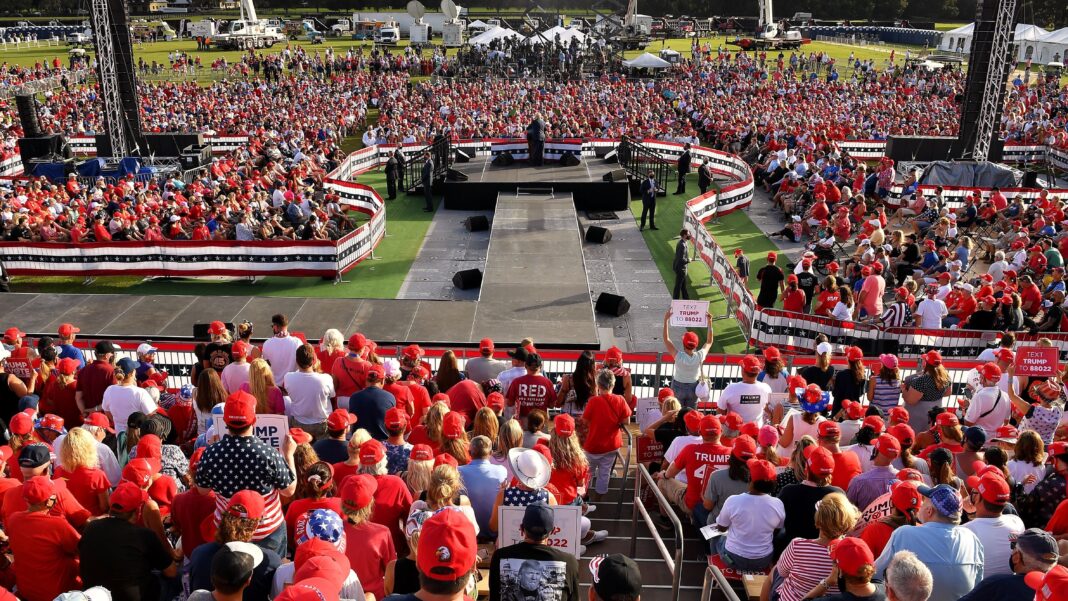 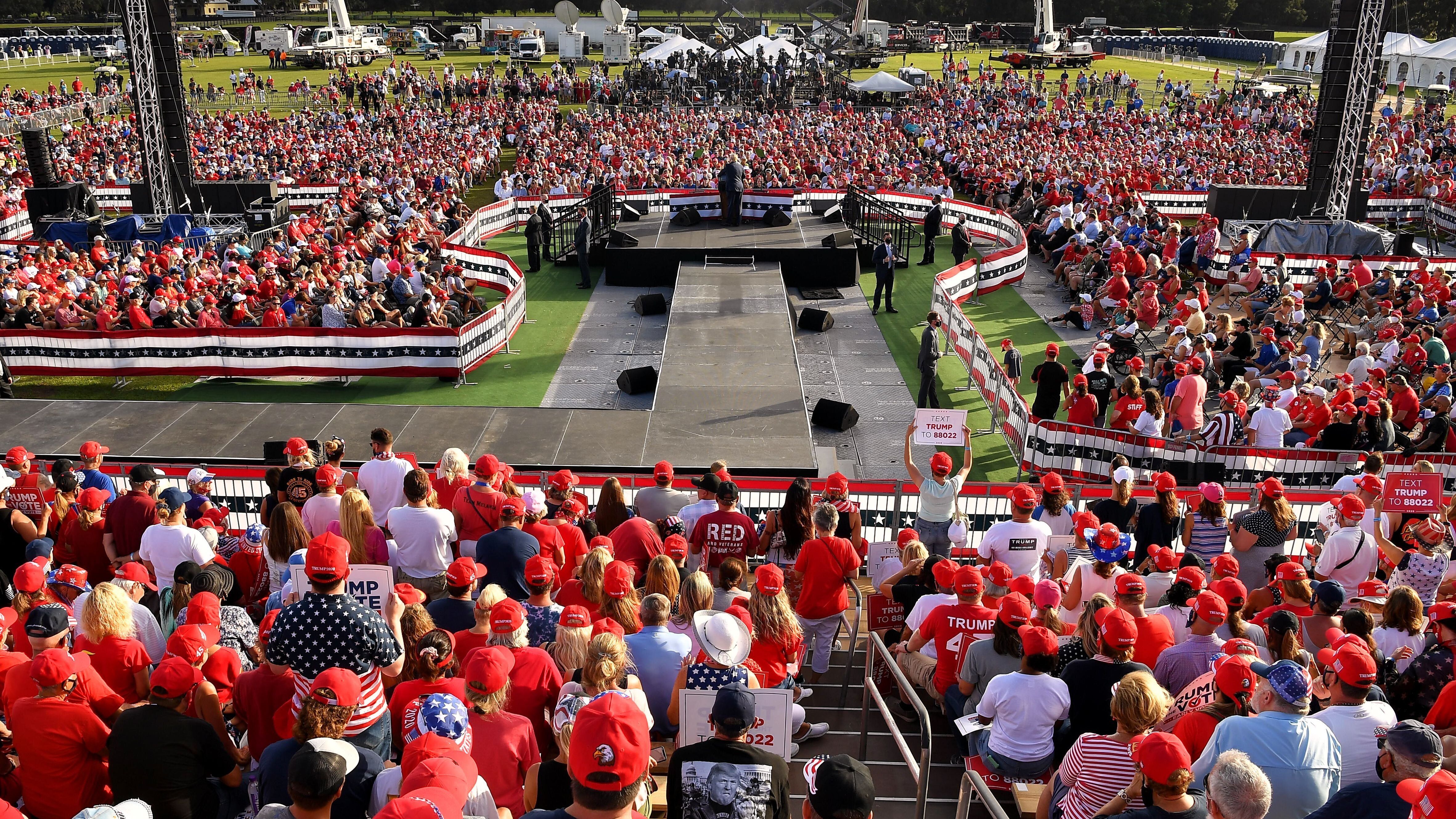 As his reelection campaign winds through its final days, President Donald Trump has fallen back on a strategy of what he believed worked for him in 2016 — a breakneck schedule of veritable festivals of falsehoods — even as evidence mounts that the “WrestleMania”-style rallies are hurting him in the polls and contributing to the spread of the coronavirus.

Through Saturday night, Trump has held 57 campaign rallies following a three-month hiatus this spring at the start of the coronavirus pandemic in the United States. Thirty-five of those have taken place since Trump’s apparent recovery from COVID-19 earlier last month. He plans another five Sunday and five more — so far — on Monday, the day before the election.

White House chief of staff Mark Meadows told reporters on the way back from Latrobe, Pennsylvania, in September that Trump was always in a better mood after doing rallies in front of his fans.

Trump himself said during his first debate with Democratic nominee Joe Biden that his supporters enjoyed hearing from him. “People want to hear what I have to say,” he said. “I mean, I’m doing a great job as the president.”

A new study by Stanford University researchers, though, concluded that Trump rallies likely caused 30,000 new coronavirus cases and 700 additional deaths. “The communities in which Trump rallies took place paid a high price in terms of disease and death,” they said.

Even before news of that study broke on Saturday, most Americans had already decided that Trump’s rallies were a bad idea during a pandemic.

The Democratic super PAC Priorities USA found similar results in its polling of the six states most likely to swing the election. In Pennsylvania, where Trump staged four rallies Saturday, 58 percent of voters said Trump’s rallies made them think less favorably of Trump, while only 22 percent said they made them think of him more favorably.

Guy Cecil, Priorities’ chairman, said he has no explanation for Trump’s behavior given the obvious polling. “Why did he tell people to inject bleach into their system? Why does he call Anthony Fauci an idiot? Because he is a reckless, egotistical, self-centered, uncontrollable president who is not doing anything that makes any sense,” Cecil said. “It is because he is a reckless asshole that has no self-control and is putting hundreds of thousands of lives at risk through his policies and putting thousands of lives at risk by holding superspreader events in places across the country.”

The Trump campaign did not respond to queries about the Stanford study. Deputy press secretary Courtney Parella offered the campaign’s stock answer about its rallies: “Americans have the right to gather under the First Amendment to hear from the president of the United States, and we take strong precautions for our campaign events, requiring every attendee to have their temperature checked, providing masks they’re instructed to wear, and ensuring access to plenty of hand sanitizer. We also have signs at our events instructing attendees to wear their masks.”

The vast majority of Trump rally attendees, however, do not wear masks, even as they are jammed in together — with the exception of those standing in view of the camera behind Trump, most of whom do wear them. The choice of forgoing a mask follows the lead of Trump, who almost never wears a mask and frequently ridicules those who do, as he did to Biden in their Sept. 29 debate and to Fox News host Laura Ingraham Friday at a rally in Michigan.

Trump’s rallies themselves, meanwhile, have been a font of misinformation about the virus, such as Trump’s repeated claims that the pandemic is “rounding the turn,” that the disease is relatively harmless and that a deployable vaccine is imminent. Those statements are all false, as are a host of other things Trump says at his events.

At a rally last week at the Lancaster Airport in Lititz, Pennsylvania, Trump spoke for 85 minutes under cloudy skies and an occasional light drizzle — a total of 13,500 words that, except for the identification of two Republican congressmen and some others in attendance, was a mixture of exaggerations, insults and groundless smears against Biden, dubious promises about his second term and 33 specific lies.

These included the size of the tax cuts he delivered (they were nowhere near the largest in U.S. history); whether the Biden campaign had abandoned Ohio (it has not); Trump’s unwillingness to solicit big-dollar donations (he has); his winning a “Michigan Man of the Year” award (he never did); the military’s running out of ammunition under predecessor Barack Obama (it didn’t); who is paying for his proposed wall along the southern border (Mexico is not doing so); and whether retailers have resumed saying, “Merry Christmas” again (many still don’t, and many never stopped).

Rallies in front of his fervent supporters have been one of the few activities that Trump has truly seemed to enjoy as president, and he began staging them just three weeks after taking office in January 2017. But unlike most candidates’ rally speeches that center on a particular set of themes, Trump’s have always been more a hybrid of a comedy routine and a staged professional wrestling event, with a set of known villains — 2016 Democratic nominee Hillary Clinton, the news media — whom Trump verbally assaults over the course of 80 or 90 minutes.

None of that is particularly useful in the final days of a presidential campaign, when the entire point is to win local television and print media coverage to reach area voters, campaign veterans said.

“At this stage in the campaign, everyone who goes to the rally is already voting for you. It’s about getting earned media,” said Ryan Williams, who worked on the 2012 presidential campaign of GOP nominee Mitt Romney. “But you have to have a message. If he’s going in to talk about Adam Schiff as a watermelon head, that’s not a great message.”

Whether Trump appreciates that strategy is unclear. Local media generally cover a visiting president extensively whether he speaks before 100 supporters or 10,000.

But when Trump arrived in Rochester, Minnesota, Friday night to learn that the Democratic governor had refused to waive COVID-19 restrictions on public gatherings for him, Trump spoke in a glum monotone for 21 minutes before 250 supporters — his shortest rally speech on record — and quickly left.